While the risk to workers remains the same, the situation is now very different from employers’ perspective, writes Nicole Hallett. 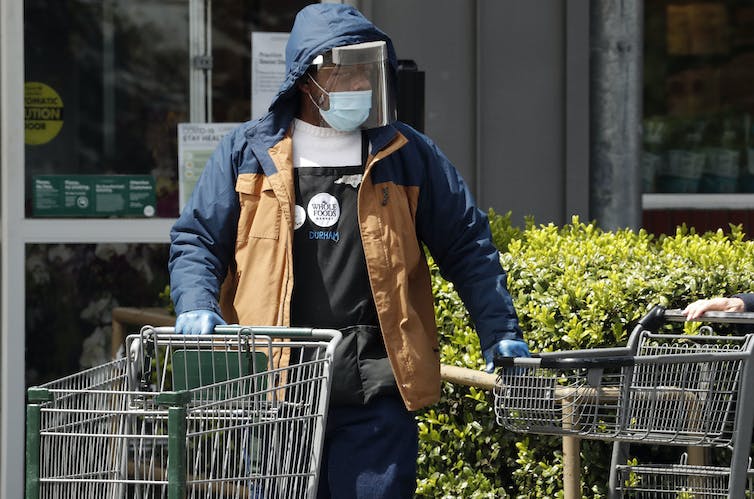 By Nicole Hallett
University of Chicago

Now, some of those companies, such as Amazon, RiteAid and Kroger, are ending their hazard or increased pay policies. Yet the risk to these workers remains the same, and the pandemic continues to rage, with tens of thousands of new coronavirus cases in the U.S. and over 1,000 deaths a day.

As a labor and employment law expert, I study how employers respond to economic incentives and how labor laws can ensure that workers get paid a living wage.

If the risk to essential workers has not gone down, why is their pay decreasing?

What is Hazard Pay?

Hazard pay is a wage supplement paid to workers who do dangerous jobs.

Prior to the pandemic, hazard pay was often paid to workers who handled dangerous materials or who worked in war zones. Some workers receive hazard pay all of the time because their jobs are routinely dangerous; other workers only receive it when taking particular assignments or completing certain tasks.

But the coronavirus crisis has caused many jobs – such as grocery and retail store jobs – to be considered dangerous for the first time.

While there are some requirements regarding government workers that vary by state, in the private sector, hazard pay is not mandated by law – though it is occasionally provided for in union contracts.

The size of the pay premium varies by job and industry. The most common raise workers received during the pandemic has been an extra $2 an hour.

Why Do Companies Offer It?

To understand why some companies are getting rid of hazard pay before the crisis is over, we have to examine why they awarded it in the first place.

When hazard pay is not mandated by law or a union contract, an employer that chooses to pay a premium to workers is doing so for one reason: to entice workers to take and keep a job. A worker faced with a choice between two jobs, one dangerous and one not, will rationally choose the less dangerous job. Hazard pay incentivizes workers to take the dangerous job instead.

As the outbreak worsened in March, companies were concerned that their employees would refuse to come into work because of the risk of getting sick. That, together with worker protests and negative press coverage, prompted some major retailers and grocery chains to implement hazard pay policies. A study published in April found that 26 percent of employers who required employees to work on-site during the pandemic were planning to offer hazard pay.

While the risk to workers remains the same, the situation is now very different from employers’ perspective.

Nearly 40 million people are unemployed. That provides a large pool of workers for companies to draw from if their current employees do not want to come to work. And current workers seeing the unemployment figures may be much more hesitant to quit a job knowing there is not likely going to be another one around the corner.

Furthermore, while the risk of getting infected with the coronavirus may not have substantially decreased in much of the country, Americans’ perspective on that risk has. The U.S. is suffering a kind of “risk fatigue,” in which previously unacceptable levels of danger have become more acceptable as Americans have grown accustomed to them. Companies may rationally think that workers no longer need a wage premium to be enticed to go to work.

And that is likely why, if society believes essential workers deserve more than just the clanking of pots and pans at the end of the day for the risks they take, lawmakers will have to legislate hazard pay for certain types of jobs during the crisis if they want to ensure the workers risking their lives to bring us groceries and clean our trains get paid a bit closer to what they truly deserve.

3 comments for “COVID-19: Hazard Pay & Why Amazon and Others Are Ending It”