The inspector general violated the law by protecting the “Ukraine whistleblower” and  proved to be the enemy of real whistleblowers, say John Kiriakou and Pedro Israel Orta.

President Donald Trump, with some partisan fanfare, fired Intelligence Community Inspector General Michael Atkinson last month, saying that he had “no confidence” in him.  Progressives howled that Atkinson should have been left to do what he was hired to do.

Atkinson said under oath in January 2018 during his confirmation hearing that he would protect intelligence-community whistleblowers, specifically saying that he would “encourage, operate, and enforce a program for authorized disclosures by whistleblowers within the IC that validates moral courage without compromising national security and without retaliation.” But that’s not what happened. 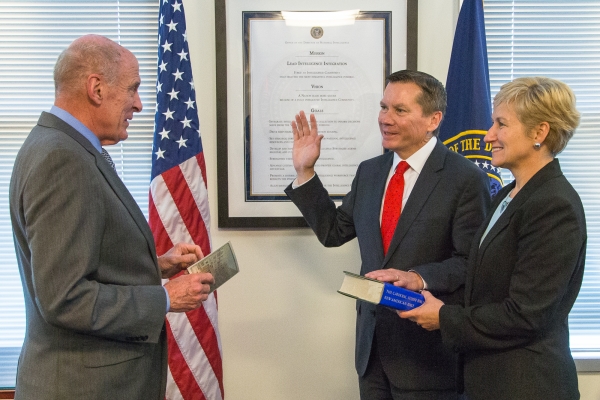 Former Director of National Intelligence Dan Coats swearing in Michael Atkinson as inspector general of the intelligence community, May 2018. (Office of the DNI)

Atkinson proved to be the enemy of real whistleblowers.

Atkinson was quick to  defend the “Ukraine whistleblower” who per the Department of Justice Office of Legal Counsel was not a whistleblower at all, as defined by the Intelligence Community Whistleblower Protection Act (ICWPA).

Failures to protect intelligence-community whistleblowers have serious national security implications. Foreign assets, employees and contractors working for the intelligence community can have their lives turned upside down if they blow the whistle on waste, fraud, abuse, or illegality and are not protected.

One outstanding and unresolved intelligence-community whistleblower reprisal case is John Reidy from the CIA.  Reidy disclosed serious deficiencies in classified CIA programs. The CIA chose to attack Reidy and cover up their own mistakes, which reportedly led to dozens of foreign intelligence assets being arrested and executed.  Reidy’s reprisal case remains unresolved with Atkinson failing to assist.

Atkinson refused to assist yet another CIA whistleblower, James Pars, as was widely reported.  The Pars case may have been a thorny issue for Atkinson because of the nature of the allegations.  Pars had served in the Inspector General’s office along with the very IGs who later acted against him.

But Pars had properly reported through authorized channels serious allegations of wrongdoing with the interim leaders at the Office of the Intelligence Community Inspector General. The CIA and intelligence community response was to silence Pars by refusing assistance, taking more reprisals, not properly investigating the original reprisals, and finally terminating Pars.

Moreover, Atkinson failed to assist Daniel Meyer, the former executive director of whistleblowing for the Office of the Intelligence Community Inspector General.  Pars made disclosures to the then-director of national intelligence and his principal deputy about the Office of the Intelligence Community Inspector General’s abuses and reprisals against Meyers. Even though these senior officials acknowledged the issues, Meyers was fired.  Again, Atkinson failed to assist.

To date, the Reidy, Pars and Meyers reprisal cases remain open.  There is no doubt that Atkinson inherited a mess, but instead of helping, he chose to cover up and not to take actions to correct these wrongs.

Atkinson’s actions constituted very serious failures to uphold the integrity, efficiency and effectiveness of intelligence-community whistleblower protections. Atkinson chose instead to violate the law by protecting the “Ukraine whistleblower” which did not meet the ICWPA reporting requirements and failed to fall under the authority of the director of national intelligence or the intelligence community inspector general. Trump had every right to fire Atkinson for cause.

Congress must uphold the rule of law by providing Reidy, Pars and Meyers with the relief the whistleblower protection law mandates. It is time for Congress and the Office of theIntelligence Community Inspector General to protect the real intelligence-community whistleblowers first by enforcing the lawful reprisal-protection standards.

Second, the Office of the Intelligence Community Inspector General must cease initiating sham investigations covering up institutional failures and reprisals.

Third, Reidy, Pars and Meyers deserve immediate remedies and corrective action. Until these actions are taken and are made standard operating procedure, whistleblowers in the intelligence community will keep their mouths shut.  And we’re all worse off for that.

Pedro Israel Orta is a former CIA and IC IG officer and whistleblower.