A Scandinavian group has launched an appeal to the Swedish government to investigate misdeeds in the investigation of sexual allegations against Julian Assange.

A Scandinavian activist group has opened signatures for an appeal to the Swedish government for “a full and transparent investigation” into a “possible disappearance of documents” and the “illegal destruction of evidence” in the Swedish prosecutors and police probe of sexual allegations against Julian Assange.

The appeal also demands Assange’s release from Belmarsh prison in London where he is on remand in an extradition request by the United States on espionage charges for unauthorized possession and dissemination of classified material. It calls on Sweden to provide him asylum.

The investigation the appeal seeks would also look into why Assange’s case appears to have exceeded a statute of limitations as well as into pressure British authorities brought to bear on a Swedish prosecutor against Assange.

Sweden has three times dropped the case against the imprisoned WikiLeaks publisher. The appeal acts on the findings of Nils Melzer, the United Nations special rapporteur on torture and other cruel, inhuman or degrading treatment, who said Swedish police forged evidence in the case against Assange. 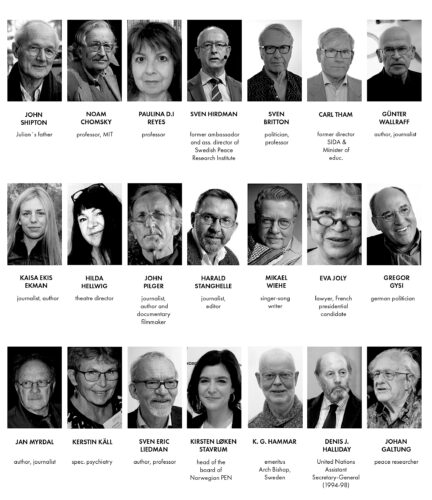 Some of the early signers of the appeal.

A month after WikiLeaks published the Afghan War Diaries in 2010, two women went to the police in Sweden to ask if Assange could be tested for sexually transmitted disease after having unprotected relations with both of them. One of the women later texted that she had been “railroaded” by police into making a formal complaint about rape and refused to sign her statement.

The next day Sweden’s chief prosecutor dismissed the allegations. She said: “I don’t think there is reason to suspect that he has committed rape.”

After Swedish authorities told him he was free to go, Assange returned to London when an extradition request was issued by a prosecutor, not a judge, and he was arrested in December 2010. This came after Swedish police had altered the statement of one of the women who had refused to sign it, in a way that permitted the case to be re-opened, according to Melzer’s investigation. He  said:

“I speak fluent Swedish and was thus able to read all of the original documents. I could hardly believe my eyes: According to the testimony of the woman in question, a rape had never even taken place at all. And not only that: The woman’s testimony was later changed by the Stockholm police without her involvement in order to somehow make it sound like a possible rape. I have all the documents in my possession, the emails, the text messages.”

While still in the police station, she wrote a text message to a friend saying that she didn’t want to incriminate Assange, that she just wanted him to take an HIV test, but the police were apparently interested in «getting their hands on him.» The police wrote down her statement and immediately informed public prosecutors. … two hours later, a headline appeared on the front page of Expressen, a Swedish tabloid, saying that Julian Assange was suspected of having committed two rapes. […]

The statement was edited without the involvement of the woman in question and it wasn’t signed by her. It is a manipulated piece of evidence out of which the Swedish authorities then constructed a story of rape. … The Swedish authorities, though, were never interested in testimony from Assange. They intentionally left him in limbo. Just imagine being accused of rape for nine-and-a-half years by an entire state apparatus and by the media without ever being given the chance to defend yourself because no charges had ever been filed.”

After he exhausted his appeals in British courts to fight extradition to Sweden, Assange sought and received political asylum from the government of Ecuador in its London embassy on June 19, 2012. Assange and his lawyers said at the time they feared onward extradition from Sweden to the U.S. to face charges for publishing classified material, a fear that was realized on the day he was arrested and dragged out of the embassy on April 11, 2019.

The text of the appeal:

Appeal to the Swedish government.

The whistle blower website Wikileaks’ founder Julian Assange is detained in the British high security prison Belmarsh. His health is in a critical condition. We, the signatories of this appeal, fear for his life and mental health due to the treatment he is exposed to. We demand his immediate release, respect for his fundamental human rights, a fair and transparent judicial treatment and protection against extradition to USA.

The United Nations’ Special Rapporteur on torture and other cruel, inhuman or degrading treatment, Nils Melzer, visited Julian Assange in prison on 9 May 2019 with a group of medical doctors. They concluded that Assange showed “all symptoms that are typical consequences of prolonged mental torture.”

We are deeply alarmed by the UN findings concerning Assange’s state of health and of the legal proceedings he has been subjected to, in particular by the Swedish police from 2010 and onwards.

The UN report argues that this and a number of other serious breaches of law may have been carried out by the authorities during the process against Assange. Sweden has, since it started this ball to roll, under the Protection from Torture treaty (CAT) a responsibility also for the pain inflicted upon Assange in Belmarsh and Britain. The Swedish prosecutor and police have refused to respond to claims presented in letter of 12 September 2019. Not to respond to the Melzer/UN report and the serious accusations it presents is unacceptable. It undermines the authority of the United Nations. And the public is entitled to this information if respect for judicial institutions is to be upheld.

We, the signatories of this appeal, find the report by the United Nations rapporteur on torture and of the UN’s office on arbitrary detention deeply alarming.

We demand the immediate release of Julian Assange from British prison and that he be granted asylum in Sweden or another country of his choice, guaranteed not to be extradited to the US. The present coronavirus threat aggravates the situation even further and makes his release even more pressing.

We finally demand that Julian Assange be given a fair treatment in accordance with principles of basic human rights and the rule of law and that any wrongdoing against him brought about by representatives of the Swedish authorities be rectified and fully compensated for in accordance with Swedish law.

Open for signatures at: www.setjulianfree.org.

← As Another Perjury Trap is Exposed the FBI’s Case Against Trump Collapses
Consortium News Blazed the Trail of Russiagate Reporting; Help Us to Continue Telling the Story →