Nobody wants a traumatic experience turned into a weapon used to bludgeon them before jeering crowds, writes Caitlin Johnstone. 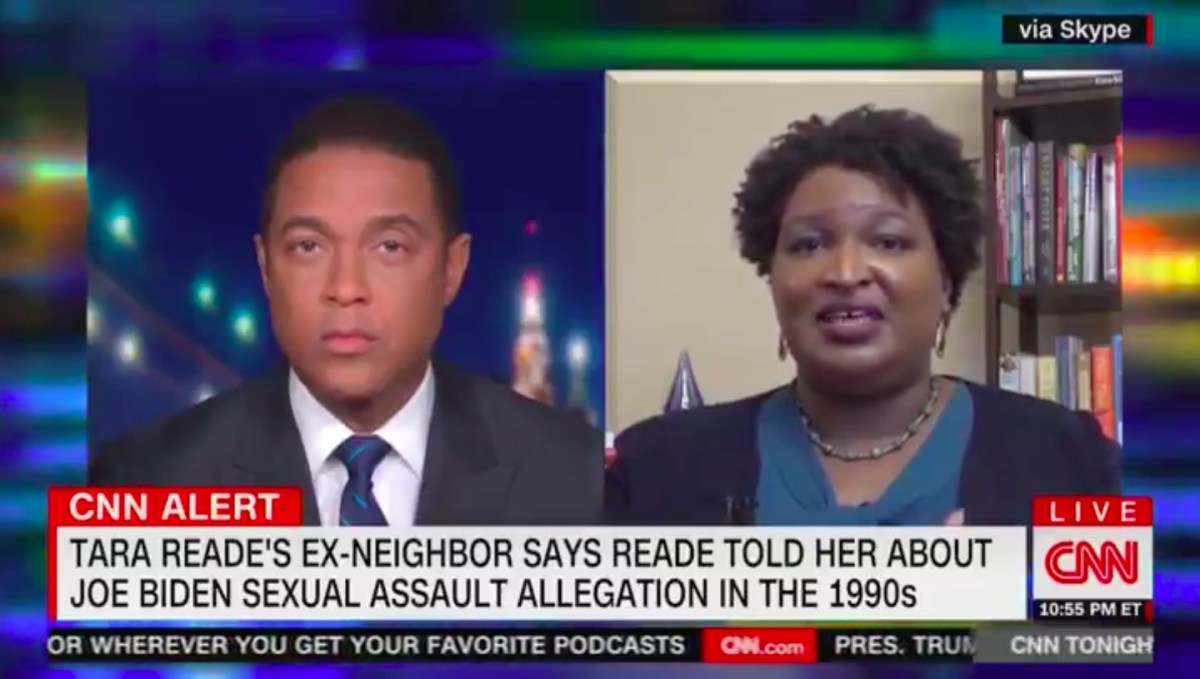 Former Georgia state congresswoman and gubernatorial candidate Stacey Abrams, who is on the Joe Biden running mate short list and making no secret of her desire for the job, said on CNN Tuesday night that she did not believe rape allegations against the former vice president to be credible.

“The New York Times did a deep investigation and they found that the accusation was not credible. I believe Joe Biden,” Abrams said when pressed on further corroborating evidence that Biden’s accuser Tara Reade had been talking about a sexual assault by the then-senator way back in the nineties.

CNN’s Don Lemon pressed Abrams on the contradiction between her earlier “believe women” rhetoric about conservative Supreme Court Justice Brett Kavanaugh’s accuser, to which Abrams responded that Kavanaugh’s accuser was not given a fair hearing but Tara Reade was. Past tense. Over and done with now.

Lemon did not ask why Abrams considers The New York Times the official arbiter of who was and was not raped. He did not challenge her false assertion that The New York Times concluded Reade’s accusation was “not credible.” He did not point out that the investigation by the The New York Times took place prior to the emergence of the corroborating evidence in question. Abrams was allowed to coolly insert a false, baseless narrative into public consciousness and move on.

In reality, The New York Times is not the authority on who has and has not been sexually assaulted. That’s not a thing.

In reality, The New York Times has smeared Reade with a scandalous hit piece dismissing her allegations because she has written approvingly of Russian president Vladimir Putin, implying that either (A) Reade is a Russian agent fabricating the allegations to help Trump, or (B) that it’s okay to rape women if they disagree with beltway consensus foreign policy.

In reality, two new corroborating pieces of evidence have been added to the growing pile since The New York Times published its “investigation” into Reade’s allegations: footage of Reade’s mother anonymously calling in to Larry King Live in 1993 during Reade’s last month of employment with Biden saying that her daughter was considering going to the press with a very serious allegation against a very prominent senator, and a former neighbor saying that Reade had told her about the sexual assault in the mid-nineties.

I have never been in the “always believe all women” camp; it’s a narrative that’s too easy to manipulate once you get enough people believing it. But at this point there are basically only two possibilities: either (A) Tara Reade was going around lying to her closest confidants in the 1990s with the very long-term goal of one day thwarting Biden’s third presidential bid decades later, or (B) a powerful man sexually assaulted a woman. One of these, in my opinion, is a lot more probable than the other.

Reach out to me directly and ask ?
I am not an " imperfect victim". I was lifelong Democratic supporter single mom that put myself through law school and I was raped by Joe Biden, my former boss, a Democrat.
There are no excuses for institutionalized rape culture. Thank you. https://t.co/hOQTxAzfa5

I’ve been avoiding writing much about Tara Reade, for a lot of reasons. Firstly, I’m a survivor of multiple rapes and it brings up a lot of ouch for me, especially since whenever I write about rape as a problem I always get a deluge of highly triggered men (and sometimes one or two highly traumatized women) calling me a man-hater and saying all kinds of nasty things to me. Secondly, I’ve been trying not to spend too much time on the details of an election we all know is fake anyway between two establishment candidates we already know are deeply depraved.

But mostly I avoid the subject because it’s just so goddamn gross. It’s gross to watch liberals going around pretending they believe that Handsy Uncle Hair Sniffer would never dream of shoving his fingers into a woman without her consent. It’s gross watching the language of leftism being borrowed to defend pure, relentless victim smearing. It’s gross watching people who’ve built their political identities around pretending to care about women try to spin these allegations as Reade being dishonest for partisan reasons, when in reality that’s exactly what they themselves are doing.

Due to my experiences with and sensitivity to the subject matter, going through this stuff feels kind of like getting punched in the privates over and over again. There are smears everywhere, from the establishment narrative managers to their brainwashed rank-and-file herd. Yesterday some “KHive” asshole told me that Reade is mentally ill and talking about her experience will probably drive her to suicide, citing a baseless smear by McResistance pundit Sally Albright as his evidence. There’s a Twitter thread with thousands of shares going around right now where some liberal combed through all Reade’s old tweets highlighting typos she made and claiming they show Reade tweeting “in a Russian accent.”

And there are definitely a whole lot of rape survivors experiencing the same thing about this story right now.

This is exactly the nightmare scenario that sexual assault survivors imagine when they contemplate coming forward. It’s why so many of them don’t. Especially when their attacker is powerful.

It sucks because if we’re to build a healthy world we’re going to have to get rid of all the people who shouldn’t be in power, and the very first lot we should eliminate are the ones who abuse their power to assault the sexuality of other human beings. If you use your power to rape people, you will with absolute certainty use it to do other unconscionable things as well, so eliminating those who do so is the first step toward health. That’s step one, and we can’t even get there, because blind partisan hackery turns pussyhat-wearing liberals into a bunch of snarling male supremacists.

I was 19 the first time I was raped. The last time I was 39. I never reported my attackers, for reasons the specifics of which I’m not interested in explaining or defending, but let’s just say that there are many messages you get sent by society telling you that if you report your rapist you are ruining a man’s life, destroying his family, career and future over one “mistake.” That it’s better just to suck it up because you’re strong and you can handle it.

You are taught that if you report your rape, you will be treated like the criminal, and the “investigation” that will take place will not put its spotlight on the accused, but on you, the accuser. You will have to defend your life choices and your character when you’re in the process of attempting to recover from a deeply harmful assault. You are taught that if you report these things that it’s you that will be shunned and shamed by members of your own tribe. And if the person is powerful, then you also know that this will likely end your career.

All these things are happening to Tara Reade right now. None of that has changed. Millions of young girls are being sent that message, once again, all across America, on screens large and small. They are being shown that if you accuse someone who has power over you of rape, you will be demonized and attacked, even by people who say they care about you, about a profoundly sensitive matter involving the most traumatic thing you’ve ever experienced.

And I don’t know what can be done about it.