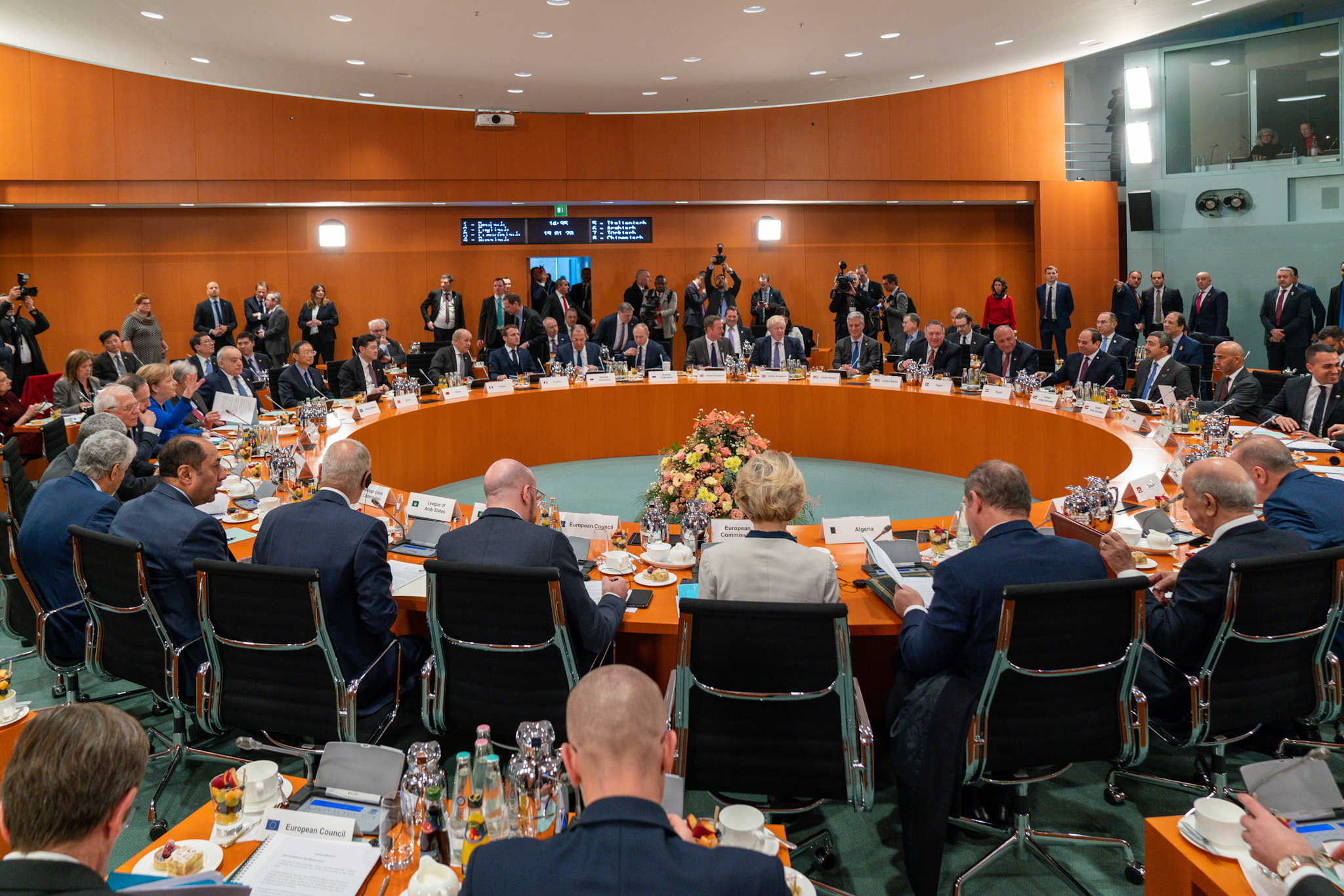 Following NATO’s intervention in Libya in 2011, the oil-rich North African country has been bogged down in multiple political crises. Since Libya’s civil war erupted in May 2014 the country has remained bifurcated between two centers of power, one in Tripoli and the other in Tobruk. Since April 2019 — when General Khalifa Haftar’s self-styled Libyan National Army (LNA) launched its westward offensive dubbed “Operation to Liberate Tripoli” — Libya’s conflict has been spiraling out of control.

The many deep interests and conflicting agendas of so many powerful foreign actors unfortunately dim the prospects for diplomatic efforts to successfully wind down Libya’s crisis in the foreseeable future.

This month’s Berlin Conference on Libya was good for, if nothing else, raising global concern about the Libyan crisis and for placing greater focus on the destabilizing impact of foreign interference in the North African country’s internal affairs. But without any means to enforce pledges made by the attending countries with respect to halting arms deliveries to Libyan factions, it is difficult to imagine any concrete and positive change in Libya coming out of Berlin. 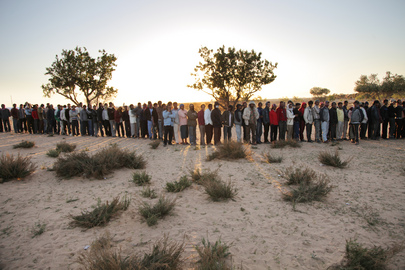 Hundreds of refugees from Libya line up for food at a transit camp near the Tunisia-Libya border. March 5, 2016. (United Nations)

Algeria, a neighbor and historically influential diplomatic actor in the Maghreb, has been left out of too many analyses on Libya’s post-Qaddafi crisis. Part of the reason has to do with Algeria’s respect for Libyan sovereignty. The leadership in Algiers been has principally and pragmatically opposed to foreign intervention in Libya. The Algerian view on non-interference in the affairs of foreign countries is heavily informed by the North African country’s historical experiences under French colonial rule and popular resistance to it.

With little support from other Arab League members, Algeria stood against NATO/Gulf intervention in Libya amid the “Arab Spring” unrest of 2011. Since August 2014, Algiers has opposed Egypt and the United Arab Emirates’ (UAE) intervening in the Libyan civil war. It should be noted that because Egypt shares a border with Libya, Algiers finds Cairo’s intervention to be negative albeit less unreasonable than Abu Dhabi’s role in Algeria’s war-torn neighbor. Also, despite its strong partnership with Moscow, Algeria has opposed the Wagner Group — a Russian military company, which is often described in Western media as President Vladimir Putin’s shadowy mercenary force — helping the LNA amid Haftar’s push to capture Tripoli.

As Algeria’s leadership has stressed, the LNA toppling the Government of National Accord, or GNA,  would cross Algiers’ “red line.” This position, however, has not translated into support for Turkish military intervention in Libya, even if Ankara is defending the Tripoli-based administration that Algeria, along with the United Nations, recognizes as Libya’s legitimate government. As is the case in other Arab states, there is concern in Algeria about President Recep Tayyip Erdogan’s so-called neo-Ottoman foreign policy, plus Turkey’s NATO membership, which both impact the Algerian government’s positions in relation to Ankara’s military intervention in Libya.

Nonetheless, Algeria has greater problems with Abu Dhabi’s actions in Libya than anything that Turkey is doing in the North African country. With Algeria respecting the GNA’s legitimacy and Abu Dhabi backing Haftar as he attempts to topple that government in Tripoli, Algiers’ perspective on Turkish versus Emirati interference in Libya is understandable. Nonetheless, it is inaccurate to conclude that Algeria has embraced Turkey’s role in Libya, even if Ankara —along with Rome and Doha — would like to see Algiers align more closely with them on the Libya file.

Rather than arming certain proxies, partners, or clients in Libya, Algeria has embraced a neutral position. Algeria desires the restoration of peace and stability, above all else, in Libya. Similar to Tunisia, Algeria is a neighbor of Libya with grave and extremely valid concerns about the spillover of chaotic violence. The In Amenas hostage crisis of January 2013, carried out by armed Salafist-jihadists — some of whom came from Libya — underscored Algeria’s vulnerabilities to Libya’s chaos. Within this context, Algeria has been spending $500 million on securing its Libyan border and that figure has recently increased following escalation of the conflict with more foreign intervention.

Last year, Algeria was in a weak position to exert its influence in Libya because of Algerian President Abdulaziz Boueflika’s ouster and the transition to a new head-of-state, Abdelmadjid Tebboune.

Yet with less internal uncertainty in Algeria this year, Algiers will attempt to play a more pronounced role in terms of facilitating dialogue between Libyan actors themselves, which the Berlin Conference did not feature. This month, Algeria’s government has been working hard to bring actors together to discuss the Libyan crisis in the hope of finding some common ground. On January 23, Chad, Egypt, Mali, Niger, Sudan, and Tunisia’s chief diplomats met in Algiers to discuss plans for resolving Libya’s conflict while Germany’s foreign minister also attended the meeting. The GNA’s top diplomat, however, did not attend the meeting in Algiers because there were rumors that Haftar would be present.

Yet with Turkey, Russia, the UAE, France, and Egypt pursuing their own agendas in Libya, it remains to be seen how much Algeria will be able to rein in these foreign powers’ ambitions. The reality is that Ankara and Moscow are the two main external players shaping events on the ground in Libya and officials in Algiers will have to strategize accordingly, ultimately balancing good relations that Algeria has with both the Turkish and Russian governments in order to gain greater leverage when it comes to advancing Algerian interests in Libya. Nonetheless, that will likely be no easy task for Algiers.

Unquestionably, Algerians and their leaders will continue to have a negative view of foreign interference in Libya. The view is that ultimately neighboring Algeria and Tunisia will pay the price for the further internationalization and dangerous escalation of Libya’s civil war as a result of actions taken by countries that do not border war-torn Libya. The Algerians, who suffered from the “Black Decade” of the 1990s, are all too familiar with violence that terrorizes a population and shatters dreams. In this context, Algeria’s government will seek to play its cards in order to prevent its neighbor from becoming the Arab region’s “next Syria.”

Disturbing from Algeria’s perspective is the likely possibility that the renegade general will never engage the GNA diplomatically as he is ambitiously hellbent on capturing every inch of Libyan territory, even if that requires years of continued warfare. Unquestionably, if the North African country remains bogged down in its nightmarish conflict, Algeria will be forced to pay for sharing a 620-mile border with Libya.

If you value this original article, please donate to Consortium News.

← UK Came & Went, Leaving Europe in a Mess
JOHN KIRIAKOU: How Do You Trust a Politician? →