As Great Britain returns to the uncertainties of the open sea, it leaves behind a European Union that is bureaucratically governed to serve the interests of financial capital, writes Diana Johnstone.

Whew.  Finally, at last, the United Kingdom is formally leaving the European Union on Jan. 31.  Here in Paris, the champions of French withdrawal from the EU are celebrating. They see Brexit as the harbinger of a future “Frexit,” a French departure from undemocratic governance, and the beginning of the end of a failed project to unify Europe around the demands of neoliberal capitalism.

But the paradox is that the champions of European unification might be celebrating even more – if it weren’t too late. Because years of British membership have already helped shatter the original dreams of a united Europe, whether the aspirations of the federalists for political unity or the project of a European confederation of independent states advocated by Charles De Gaulle some 60 years ago.

Way back then, when De Gaulle was meeting with the aged West German Chancellor Konrad Adenauer to promote Franco-German reconciliation, the two old statesmen were thinking in terms of working gradually toward a partnership of core European states that would preserve their sovereignty within a confederation ensuring peace and cooperation.

From the start, the question of British membership appeared as a thorn in the side of European unity. Initially, London was opposed to the Common Market.  In 1958, Prime Minister Harold MacMillan assailed it as “the Continental Blockade” (alluding to Napoleon’s 1806 European policy) and said England would not stand for it.  But as the project seemed to take shape, London sought accommodation.

De Gaulle warned from the start that Great Britain didn’t belong in a unified Europe, geographically, economically or above all psychologically.

The remark has become famous: in 1944, on the eve of the Normandy invasion, in a quarrelsome exchange, U.K. Prime Minister Winston Churchill reportedly told De Gaulle that if Britain had to choose, it would always go for “the open sea” rather than the European continent.

Of course, Britain long ago lost both Churchill and its empire.  Nevertheless, Brits remain psychologically wedded to their island status, the origin of their overwhelming maritime power that built the empire and has left traces of English-speaking nations and preferred trade relations all around the world.  They do not normally feel part of “the continent” and the traditional policy of their governments was always to keep the continent divided and weak.  This policy was passed on to London’s pupils in Washington, echoed in the description of NATO’s purpose: “to keep the Russians out, the Americans in and the Germans down” – the joke that tells the truth.

Sixty years ago, De Gaulle, who envisaged a European confederation as a way to achieve independence from the American liberators (who came to stay), saw very clearly that the U.K. would be America’s Trojan horse in the European community. That is called vision, the quality of a statesman – a breed that seems to have died out in the West.  He opposed British membership as long as he could, but the American influence was too great.  And curiously enough, the ardent European federalists joined in promoting British membership, seemingly unaware that such membership was totally incompatible with the political unity they desired.

British leaders, firmly attached to their parliament, their royalty, their class system, and their unique role in the world — now largely passed on to their heirs in Washington — never would consider genuine political unity with the continent.  But as a trading nation, they wanted to be part of a Europe that would favor free trade, period.

The United Kingdom first applied for membership in 1961, at a time when it comprised the central core made up of France, Germany, the Benelux countries and Italy.

But as long as De Gaulle was president of France, this was not possible, despite U.S. support (the United States has always supported enlargement, notably Turkish membership, now considered out of the question).  The United Kingdom joined the European Economic Community only on Jan. 1, 1973, bringing with it both Ireland and Denmark, another advocate of free trade.

Bringing in Britain was the decisive step toward making unified Europe into a vast free market, a step toward globalization.  This was indeed the program of Jean Monnet, a totally Americanized French businessman who plotted the path to European unity through purely economic measures, indifferent to political issues. But it took British weight to pull Europe firmly in that direction, away from the original Common Market idea (removing trade barriers only among Member States) toward an open market, with minimum trade barriers, extending the benefits of its “free competition” doctrine to such giants as the United States and China. 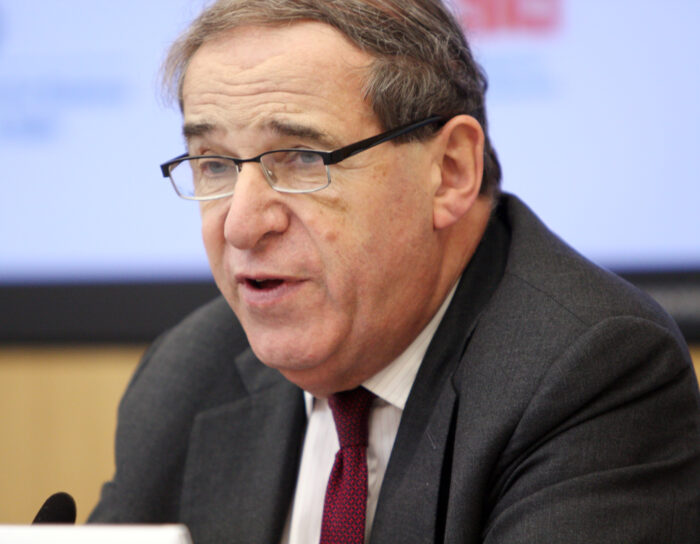 In 1989, U.K. Prime Minister Margaret Thatcher appointed Leon Brittan to the post of European Commissioner for competition, where he stayed until 1999 in charge of trade and external affairs. In Brussels his was the most powerful influence in confirming the EU’s role as chief enforcer of neoliberal policies. At the same time, Thatcher demanded “her money back” and strengthened the U.K.’s own freedom from European institutional constraints.

The U.K. never agreed to the Schengen agreement on EU borders and declined to scrap the pound sterling for the euro — a wise move, no doubt.  But also symptomatic of the essential incapacity of the U.K. to fully merge with the continent.

At the same time, the presence of London has certainly contributed to the total inability of the EU to develop a foreign policy that deviates from that of Washington. Britain supported the enlargement to the East which has made the EU more politically disunited than ever and has been the strongest supporter of the paranoid Russophobia of Poland and the Baltic States which pushes other European countries into a dangerous conflict with Russia that is contrary to their own interests.

Not that Britain is responsible for everything that is wrong with the European Union today.  A major mistake was made by French President François Mitterrand in the 1980s when he insisted on a “common European currency” under the illusion that this would help France contain Germany — when it turned out not only to do the contrary but to ruin Greece and cause ravages in Portugal, Spain and Italy.

And there are plenty of other mistakes that have been made, such as German Chancellor Angela Merkel’s invitation to come to Europe, ostensibly addressed to Syrian war refugees but understood by millions of unfortunates in the Middle East and Africa as meant for themselves.

And certainly, there were and are a minority of U.K. residents who sincerely identify with Europe and want to feel part of it.  But they are a minority.  Britain has for too many centuries cherished and celebrated its uniqueness for that to be erased by complex impersonal institutions.

As Great Britain returns to the uncertainties of the open sea, it leaves behind a European Union that is bureaucratically governed to serve the interests of financial capital. Member States, such as Macron’s France, are governed according to EU decrees against the will of their people. British membership contributed to this denial of democracy, but paradoxically, the British people themselves are the first to reject it and demand a return to full national sovereignty.

Even the ardent fans of European Unity increasingly insist that they want “a different Europe,” recognizing that the project has failed to produce the wonders that were promised. But changing this particular Europe would require unanimity between the 27 remaining, and increasingly quarrelsome, member states.

That is why the idea is growing that it may be time to give up this failed European union and start all over, seeking political understanding issue by issue between sovereign democracies rather than a nonfunctional economic unity as decreed by transnational capitalist bureaucracy.

Diana Johnstone is the author of  “Fools’ Crusade: Yugoslavia, NATO, and Western Delusions.” Her latest book is “Circle in the Darkness: Memoirs of a World Watcher“ (Clarity Press, 2020). She is also author of “Queen of Chaos: the Misadventures of Hillary Clinton.”  The memoirs of Diana Johnstone’s father Paul H. Johnstone, “From MAD to Madness,” was published by Clarity Press, with her commentary. She can be reached at diana.johnstone@wanadoo.fr .

39 comments for “UK Came & Went, Leaving Europe in a Mess”