The question is, which side betrayed the once-promising prospect of denuclearization and an end of seven decades of flashpoint tension in Northeast Asia. 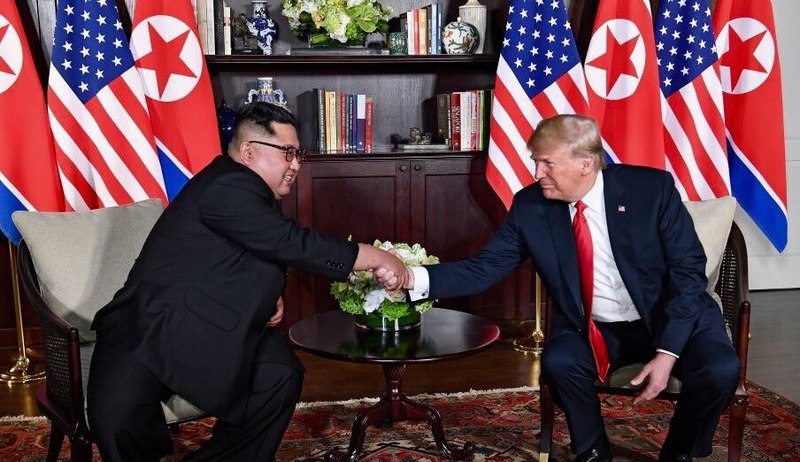 In June 2018, when Donald Trump and Kim Jong-un summitted in Singapore, the American and North Korean leaders opened the door to peace on the Korean Peninsula wider than at any time since hostilities ceased in 1953. Eighteen months later, we watch as this door creaks closed.

Which side has betrayed the once-promising prospect of denuclearization and an end of seven decades of flashpoint tension in Northeast Asia? This is our question.

A succession of developments over the past week indicates that bilateral efforts to denuclearize the two Koreas will pass into history at year-end. Kim asserted nearly a year ago, that, absent a credible diplomatic framework for a bilateral accord, the North will give up on a settlement with the U.S. and “find a new way to defend the sovereignty of the country.”

A test conducted Sunday at a previously deactivated missile launch site suggests this means Pyongyang intends to recommit to nuclear and long-range missile programs it had suspended so long as talks with the U.S. progressed.

There is a good chance the North has already determined to pursue Kim’s “new way.” Pyongyang’s ambassador to the U.N. indicated as much just prior to the test at the Sohae site Sunday.

“We do not need to have lengthy talks with the U.S. now,” Kim Song said the previous day in New York. “Denuclearization is already gone out of the negotiating table.” By the time Kim Song spoke, the North Korean wire service, KCNA, had already begun to publish shrill warnings that hostilities with the U.S. could be renewed at any time.

Kim Jong-un set the Dec. 31 deadline for progress in bilateral talks after the failure last February of his second summit with Trump, held in Hanoi. Subsequent reporting by two Reuters correspondents revealed that Trump, on the advice of John Bolton, his national security adviser at the time, told Kim he must accede to all U.S. demands before Washington would negotiate any concessions of its own. The Reuters report demonstrated that Bolton’s advice to Trump — delivered just as the president sat down with Kim, so leaving him little time to consider it — was intended to precipitate precisely the sudden breach between the two leaders that then took place.

“It occurs to us that there may not be a need to continue,” Choe Son-hui, Kim’s vice-foreign minister, said after the North Korean leader abandoned the Hanoi talks in acrimony. “We’re doing a lot of thinking.” In hindsight, Choe’s remark seems to have signaled the North’s post–Hanoi distrust of U.S. intentions despite Kim’s notably friendly personal relations with Trump.

This wariness and impatience are justified. In a round of talks held in Stockholm in October, North Korean negotiators walked out in a matter of hours, complaining that the U.S. side had nothing to offer but a repackaged version of the fatal proposition presented in Hanoi. If you reject our proposal that 6 and 4 make 10, let us offer you 7 and 3: This is effectively the U.S. position to date.

Nothing that has occurred since the first Trump–Kim summit in Singapore suggests that the president is anything other than entirely sincere in his desire to forge an historic agreement with Pyongyang. One need not assign Trump any transcendent geopolitical vision to recognize this. The Dealmaker wants a deal, preferably one that has eluded all of his predecessors in the White House.

After the Trump-Kim June 2018 summit, North Korea searched for and returned the presumed remains of U.S. POWs and MIAs from the Korean War. (VOA via Wikimedia Commons)

On Saturday Trump conferred with South Korean President Moon Jae-in for half an hour by telephone to discuss how to salvage the negotiation process between the North and the U.S. Moon has assiduously promoted negotiations with the North since he took office in May 2017. Plainly, Trump wants Moon to help him draw Kim back from the brink.

“Kim Jong-un is too smart and has too much to lose, everything actually, if he acts in a hostile way,” Trump said Sunday. “He does not want to void his special relationship with the President of the United States or interfere with the U.S. presidential election in November.”

Kim Jong Un is too smart and has far too much to lose, everything actually, if he acts in a hostile way. He signed a strong Denuclearization Agreement with me in Singapore. He does not want to void his special relationship with the President of the United States or interfere…. https://t.co/THfOjfB2uE

These remarks appear to signal that, despite Trump’s conversation with Moon, the U.S. does not take Kim’s year-end ultimatum seriously. They also suggest that Trump considers the current escalation of tensions between Washington and Pyongyang nothing more than the posturing he indulges in prior to any significant negotiation.

In both cases, Trump is likely to be proven wrong for two reasons.

The first is that Trump may have just overplayed his hand. There are indications that Kim thinks the Sohae test Sunday — the nature of which remains unclear — significantly improves his diplomatic position. While the North’s tough talk may also be posturing, Washington now risks forfeiting some of Kim’s willingness to negotiate the elimination of the North’s nuclear and ballistic-missile capacities. “The results of the recent important test will have an important effect on changing the strategic position of the DPRK once again in the near future,” KCNA reported Sunday.

The second is that by now Trump almost certainly understands the extent to which policy cliques in Washington have circumscribed his agenda on questions such as Russia, Syria and North Korea. It may be to his credit that he persists in the face of this resistance, but his chances of overcoming it are, if anything, diminished after nearly three years of incessant subterfuge on the foreign policy side. Trump does not have a Kim Jong-un problem; he has a “deep state” problem at home.

When U.S.–North Korean talks have collapsed on previous occasions, official U.S. records tend to blur the chronology of events, erase causality, and then imply that responsibility for failure lies with the North Koreans. While there are already indications that we will see the same this time, there has been enough good reporting, mostly in other-than-corporate media, to make this fallacy plain. No one should be fooled when we read once again about those bellicose, irrational North Koreans.

All indications now suggest that Kim plans another of his blockbuster New Year’s speeches, similar to those delivered in previous years. In 2018 he announced that the North had achieved a weaponized nuclear capability with which to deter threats from the U.S. This year he declared he would be willing to meet Trump “anytime” while announcing his “new way” should diplomacy fail.

The first of these assertions is now patently true. After a year of disappointments, the second awaits the outcome of the current impasse. We will have to see in coming weeks.

After the talks in Stockholm collapsed in October, North Korea termed the debacle “sickening.” So it is, considering the opportunity that the U.S. — not for the first time — is in the process of intently squandering.

Patrick Lawrence, a correspondent abroad for many years, chiefly for The International Herald Tribune, is a columnist, essayist, author and lecturer. His most recent book is “Time No Longer: Americans After the American Century” (Yale). Follow him on Twitter @thefloutist. His web site is Patrick Lawrence. Support his work via his Patreon site.

6 comments for “PATRICK LAWRENCE: Trump’s Creaky Door to Peace in the Koreas”