The arrest is part of a wider pattern of political persecution of those who resisted the seizure of the Venezuelan embassy by a U.S.-backed coup administration, reports Ben Norton.

The U.S. government has dropped its bogus charge of “simple assault” against journalist Max Blumenthal, after having him arrested on a 5-month-old warrant and jailed for nearly two days.

The Grayzonehas learned that Secret Service call logs recorded during the alleged incident were either not kept or destroyed. The mysteriously missing evidence included print documents and radio recordings that may have exposed collusion between Secret Service officers operating under the auspices of the U.S. State Department and violent right-wing hooligans in an operation to besiege peace activists stationed inside Venezuela’s embassy in Washington, D.C. 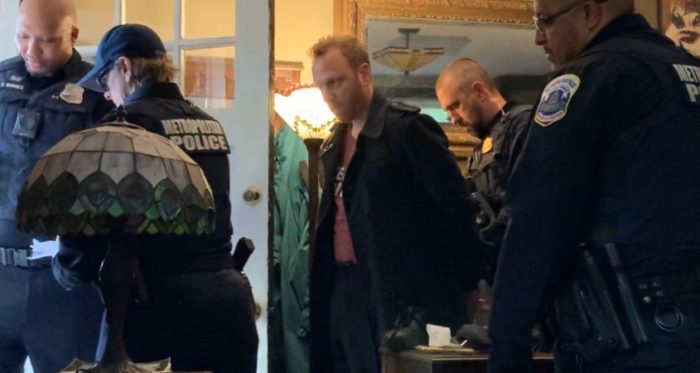 Blumenthal, who is the editor of The Grayzone, was arrested at his home on Oct. 25 by a team of D.C. cops who had threatened to break down his door. He later learned that he was listed in his arrest warrant as “armed and dangerous,” a rare and completely unfounded designation that placed Blumenthal at risk of severe harm by the police.

The government’s case rested entirely on a false accusation by a right-wing Venezuelan opposition activist, Naylet Pacheco, that Blumenthal and Benjamin Rubinstein had assaulted her while they were delivering food to Venezuela’s embassy in Washington, D.C., in the early morning on May 8. (Rubinstein is the brother of journalist and Grayzone contributor Alexander Rubinstein, who was reporting from inside the embassy at the time.)

The Grayzone has reported extensively on the corruption of coup leader Juan Guaidó, whom Washington recognizes as “interim president” of Venezuela, as well as the scandals plaguing Guaidó’s “ambassador” to the United States, Carlos Vecchio.

Vecchio personally presided over the weeks-long siege of Venezuela’s embassy in Washington, D.C., stage-managing efforts by a mob of rabid right-wing activists to prevent peace activists from receiving deliveries of food and sanitary supplies.

As The Grayzone reported, the Donald Trump administration has diverted USAID funding originally intended to assist Central American migrants to pay the salaries of Vecchio and his team in Washington.

The U.S. Department of Justice dismissed its case against Blumenthal on Dec. 6. On the same day, it also dropped charges against Rubinstein, who had been arrested on May 8, hours after the food delivery.

“I’m relieved the government has finally decided to drop these phony charges against me. But I’m also disgusted,” Max Blumenthal said, “because I should never have been hauled out of my house and thrown in jail for an obviously politically motivated, false allegation that the police failed to investigate.” 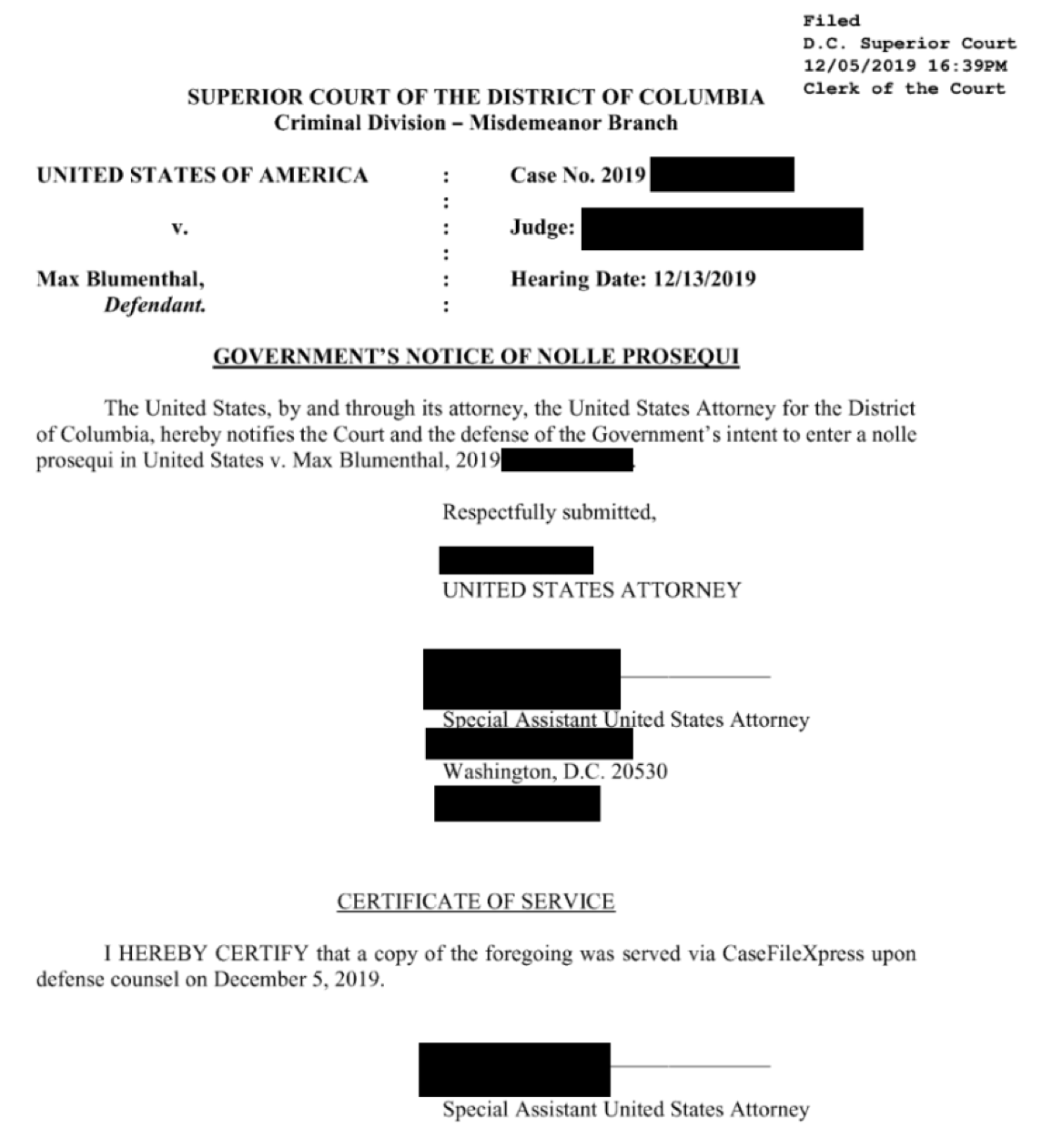 Lawyers representing Blumenthal and Rubinstein placed multiple and highly specified discovery requests to the prosecutor for Secret Service call recordings and reports logged on May 8 at the location of the embassy food delivery. The U.S. prosecutor was unable to satisfy the request, verbally confirming that if the documents had existed, they no longer did.

“This is highly unusual and highly notable, almost inexplicable in the ordinary course of operations that these records were not maintained and preserved,” said Carl Messineo, the counsel to Rubinstein and a co-founder of the Partnership for Civil Justice Fund. “Given the false nature of the allegations and that they advanced a prosecution based on these it is really questionable that this information was not produced.”

Beyond the mysterious disappearance of the call logs, there was a complete dearth of evidence on the prosecution’s side.

William Moran, who served as Blumenthal’s attorney, wondered why law enforcement trusted Pacheco, an accuser with such clear credibility issues. “The local police advanced a fraudulent case against a journalist on the word of a complainant who told at least six different, increasingly exaggerated stories and made identical accusations that night about at least three other individuals,” he said.

One Venezuelan opposition member whose identity remains under a protective order provided testimony to police attempting to corroborate Pacheco’s claims about Blumenthal and Rubinstein. According to Moran, that person had been convicted for the impeachable offense of writing fraudulent checks.

“The D.C. police wholly failed to conduct a proper investigation before calling for the arrest and imprisonment of a dissident journalist that they labeled without any cause whatsoever as ‘armed and dangerous,’ placing him in mortal danger,” Moran stated.

The arrest of Blumenthal was part of a wider pattern of political persecution of those who resisted the seizure of the Venezuelan embassy by a U.S.-backed coup administration.

On Nov. 13, police appeared at the home of Medea Benjamin to threaten her with arrest, after she too was falsely accused of assault. Benjamin, a co-founder and leader of the anti-war group CODEPINK, had been a prominent figure in the Venezuelan Embassy Protection Collective.

Benjamin was accused by members of the Venezuelan opposition of assaulting Representative Debbie Wasserman-Schultz, who had joined Carlos Vecchio for a press conference on Capitol Hill. The police eventually left without arresting Benjamin, because they did not have a warrant.

Video of the incident revealed that it was, in fact, Benjamin who was assaulted by Vecchio’s notoriously violent minions.

During the same press conference, a member of the Venezuelan opposition seized the phone of journalist Wyatt Reed. When Reed complained to a Secret Service officer on site, the officer brushed him off.

Diliana Bustillos, a Venezuelan opposition lobbyist who participated in a May 8 press conference falsely accusing peace activists of violence, threatened Reed after the incident, warning that he would “end up like [Max Blumenthal] and Ben [Rubinstein].”

The Venezuelan coup mongers are a criminal enterprise, aided & abetted by our government

Police look on as @carlosvecchio's goon assaults me, steals my phone & @dilianna says I'll "end up like @maxblumenthal and Ben [Rubinstein]"—a clear threat to have me locked up on BS charges pic.twitter.com/kiNPQXVdjs

Mara Verheyden-Hilliard, a civil liberties lawyer with the Partnership for Civil Justice Fund, was present throughout much of the embassy siege. She noticed clear collusion between the right-wing opposition mob outside and the Secret Service, who were operating at the time under the watch of the State Department.

“Throughout the siege of the peace activists at the Venezuelan embassy,” Verheyden-Hillard said, “it was apparent to those on the scene that there was what looked like a facilitated effort between the government and the mob besieging the embassy.”

The Washington Post reported extensively on the siege of the Venezuelan embassy, presenting the situation largely from the opposition’s perspective. The paper’s correspondent, Marissa Lang, uncritically conveyed Pacheco’s false charges, writing that “she said she was pushed against a wall and kicked by several men, then spent hours at a hospital being treated.”

However, The Washington Post did not report on Blumenthal’s arrest and imprisonment five months later or any of his public comments about the high-profile incident.

Meanwhile, an assortment of malicious regime-change cheerleaders seized on Blumenthal’s arrest to defame him with false and now-discredited claims on social media:

Asked about the wave of libelous attacks spurred by his arrest on false charges, Blumenthal commented, “The outpouring of support I’ve received from around the world has been more profound and meaningful than any of the smears from the usual suspects. But that does not mean that I will let this campaign of lies go unanswered. This whole episode began with a false, defamatory accusation, and I plan to take the necessary actions to see it ends with a sense of justice.”

← What We Can Learn from the Romans about Ignoring Climate Change
PATRICK LAWRENCE: Trump’s Creaky Door to Peace in the Koreas →

8 comments for “US Government Drops Case Against Max Blumenthal”