The expanding cultural authority of the armed forces is a problem for U.S. democracy, writes William J. Astore.

When Americans think of militarism, they may imagine jackbooted soldiers goose-stepping through the streets as flag-waving crowds exult; or, like our president, they may think of enormous parades featuring troops and missiles and tanks, with warplanes soaring overhead. Or nationalist dictators wearing military uniforms encrusted with medals, ribbons, and badges like so many barnacles on a sinking ship of state. (Was President Donald Trump only joking recently when he said he’d like to award himself a Medal of Honor?) And what they may also think is: that’s not us. That’s not America. After all, Lady Liberty used to welcome newcomers with a torch, not an AR-15. We don’t wall ourselves in while bombing others in distant parts of the world, right?

But militarism is more than thuggish dictators, predatory weaponry, and steely-eyed troops. There are softer forms of it that are no less significant than the “hard” ones. In fact, in a self-avowed democracy like the United States, such softer forms are often more effective because they seem so much less insidious, so much less dangerous. Even in the heartland of Trump’s famed base, most Americans continue to reject nakedly bellicose displays like phalanxes of tanks rolling down Pennsylvania Avenue.

But who can object to celebrating “hometown heroes” in uniform, as happens regularly at sports events of every sort in 21st-century America? Or polite and smiling military recruiters in schools? Or gung-ho war movies like the latest version of “Midway,” timed for Veterans Day weekend 2019 and marking America’s 1942 naval victory over Japan, when we were not only the good guys but the underdogs? 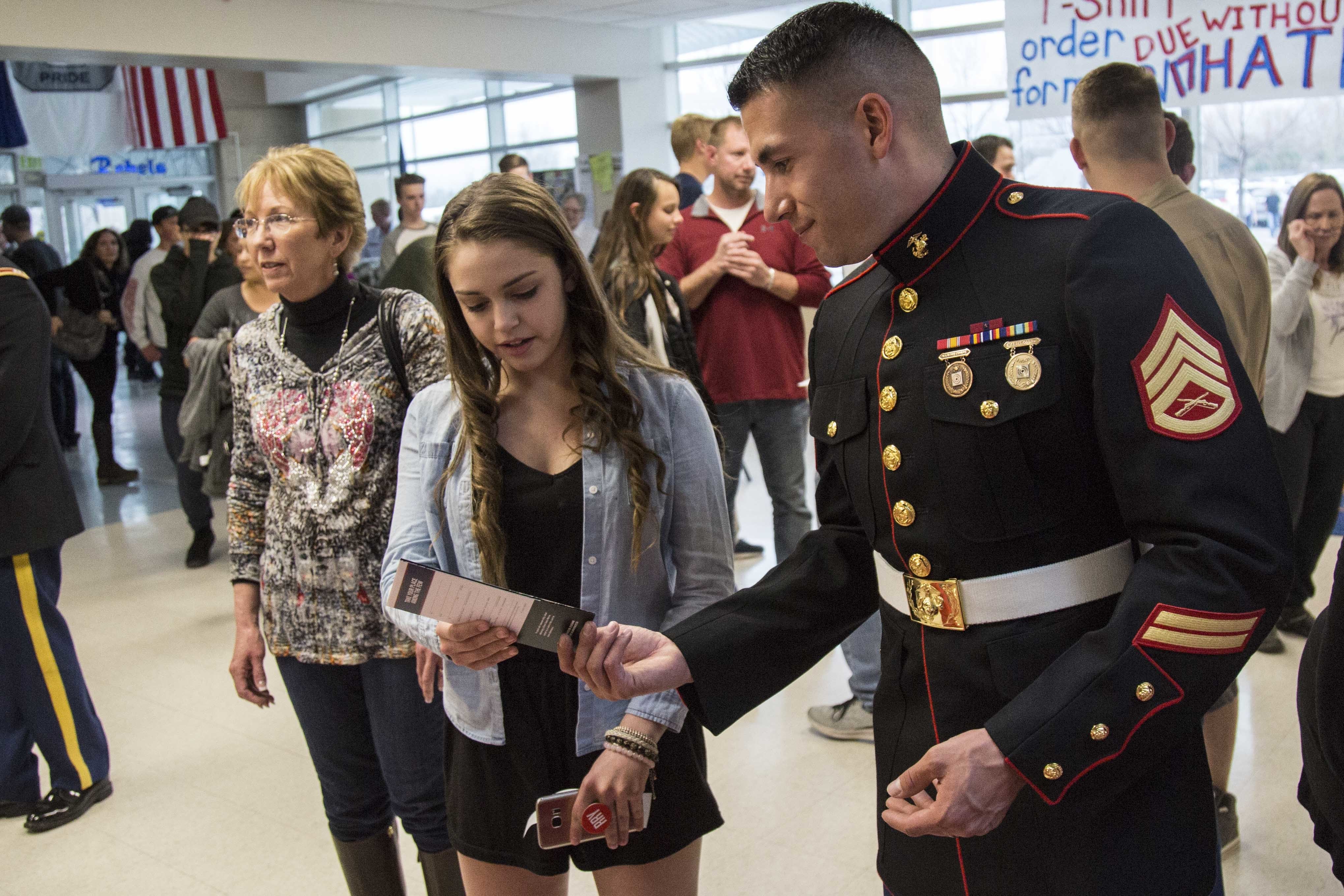 Recruiter with an attendee of the Military Exploration Workshop at Columbine High School in Littleton, Colorado, March 21, 2017. (DoD/Benjamin Pryer)

What do I mean by softer forms of militarism? I’m a football fan, so one recent Sunday afternoon found me watching an NFL game on CBS. People deplore violence in such games, and rightly so, given the number of injuries among the players, notably concussions that debilitate lives. But what about violent commercials during the game? In that one afternoon, I noted repetitive commercials for “SEAL Team,” “SWAT,” and “FBI,” all CBS shows from this quietly militarized American moment of ours. In other words, I was exposed to lots of guns, explosions, fisticuffs, and the like, but more than anything I was given glimpses of hard men (and a woman or two) in uniform who have the very answers we need and, like the Pentagon-supplied police in Ferguson, Missouri, in 2014, are armed to the teeth. (“Models with guns,” my wife calls them.)

Got a situation in Nowhere-stan? Send in the Navy SEALs. Got a murderer on the loose? Send in the SWAT team. With their superior weaponry and can-do spirit, Special Forces of every sort are sure to win the day (except, of course, when they don’t, as in America’s current series of never-ending wars in distant lands).

And it hardly ends with those three shows. Consider, for example, this century’s update of “Magnum P.I.,” a CBS show featuring a kickass private investigator. In the original “Magnum P.I.” that I watched as a teenager, Tom Selleck played the character with an easy charm. Magnum’s military background in Vietnam was acknowledged but not hyped. Unsurprisingly, today’s Magnum is proudly billed as an ex-Navy SEAL.

Cop and military shows are nothing new on American TV, but never have I seen so many of them, new and old, and so well-armed. On CBS alone you can add to the mix “Hawaii Five-O” (yet more models with guns updated and up-armed from my youthful years), the three “NCIS” (Naval Criminal Investigative Service) shows, and “Blue Bloods” (ironically starring a more grizzled and less charming Tom Selleck) — and who knows what I haven’t noticed? While today’s cop/military shows feature far more diversity with respect to gender, ethnicity, and race compared to hoary classics like “Dragnet,” they also feature far more gunplay and other forms of bloody violence.

Look, as a veteran, I have nothing against realistic shows on the military. Coming from a family of first responders — I count four firefighters and two police officers in my immediate family — I loved shows like “Adam-12” and “Emergency!” in my youth. What I’m against is the strange militarization of everything, including, for instance, the idea, distinctly of our moment, that first responders need their very own version of the American flag to mark their service. Perhaps you’ve seen those thin blue line flags, sometimes augmented with a red line for firefighters. As a military veteran, my gut tells me that there should only be one American flag and it should be good enough for all Americans. Think of the proliferation of flags as another soft type of up-armoring (this time of patriotism).

Speaking of which, whatever happened to “Dragnet’s” Sergeant Joe Friday, on the beat, serving his fellow citizens, and pursuing law enforcement as a calling? He didn’t need a thin blue line battle flag. And in the rare times when he wielded a gun, it was .38 Special. Today’s version of Joe looks a lot more like G.I. Joe, decked out in body armor and carrying an assault rifle as he exits a tank-like vehicle, maybe even a surplus MRAP from America’s failed imperial wars. 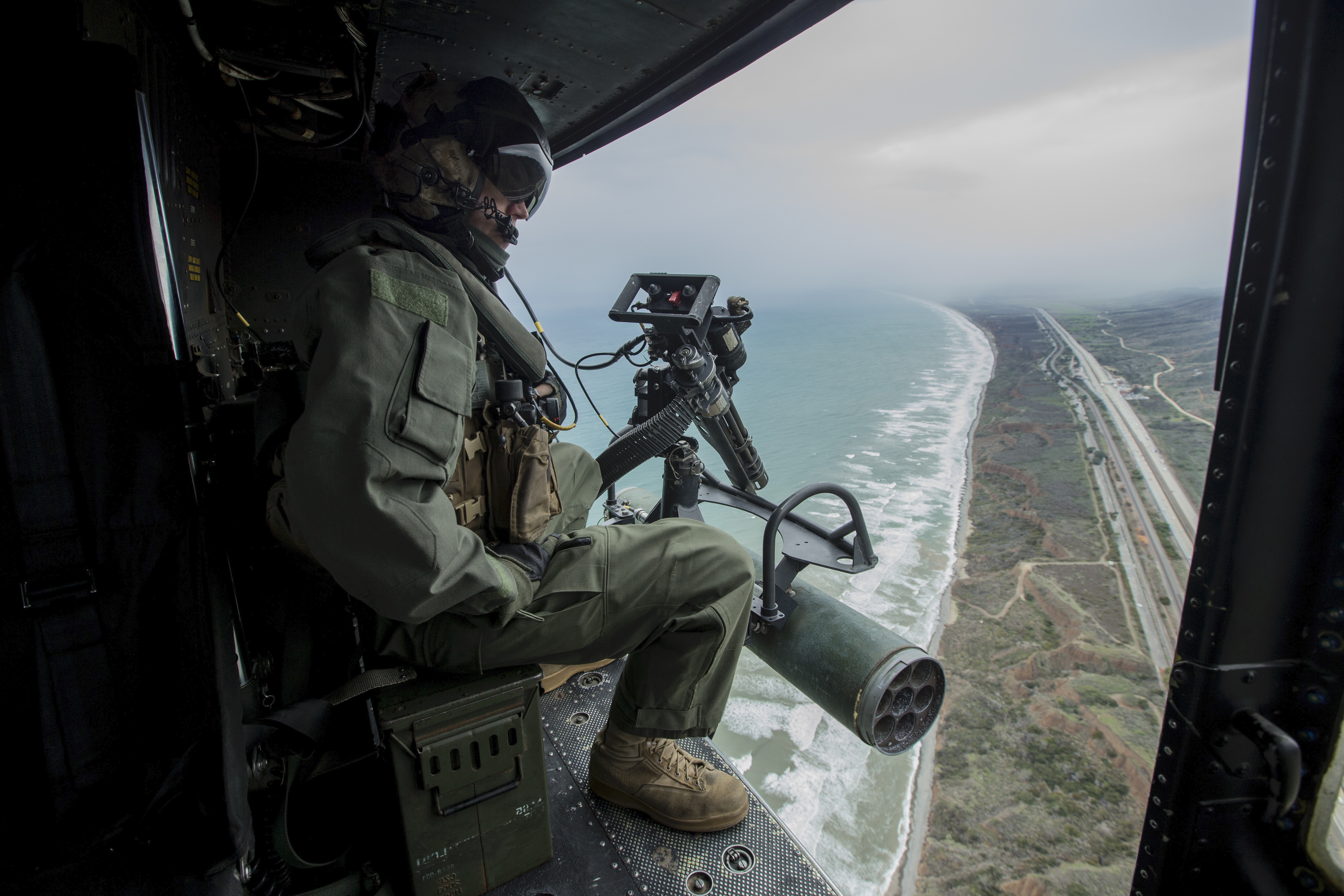 U.S. Marines assist in the filming “SEAL Team” on Marine Corps Base Camp Pendleton, Calif., Jan. 14, 2019. Camp Pendleton has been used as a filming site by a number of shows and movies in order to replicate the realism of the  military services. (U.S. Marine Corps/Joseph Prado)

Militarism in the USA

Besides TV shows, movies, and commercials, there are many signs of the increasing embrace of militarized values and attitudes in this country. The result: the acceptance of a military in places where it shouldn’t be, one that’s over-celebrated, over-hyped, and given far too much money and cultural authority, while becoming virtually immune to serious criticism.

Let me offer just nine signs of this that would have been so much less conceivable when I was a young boy watching reruns of “Dragnet”: 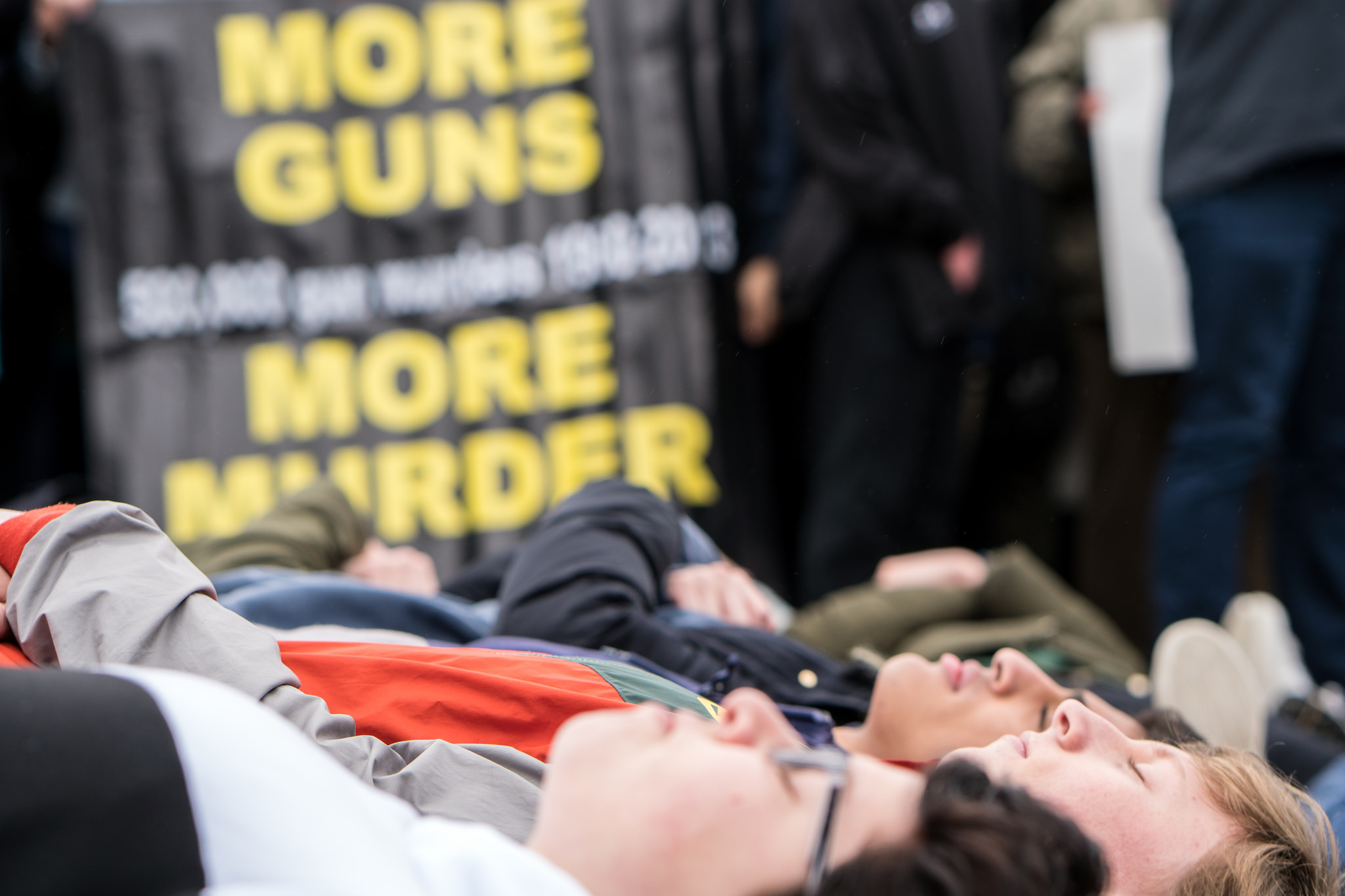 Die-in demonstration in February 2018 organized by Teens For Gun Reform in wake of the shooting at Marjory Stoneman Douglas High School in Parkland, Florida. (Lorie Shaull via Flickr)

What these nine items add up to is a paradigm shift as well as a change in the zeitgeist. The U.S. military is no longer a tool that a democracy funds and uses reluctantly.  It’s become an alleged force for good, a virtuous entity, a band of brothers (and sisters), America’s foremost missionaries overseas and most lovable and admired heroes at home. This embrace of the military is precisely what I would call soft militarism. Jackbooted troops may not be marching in our streets, but they increasingly seem to be marching unopposed through — and occupying — our minds.

The Decay of Democracy

As Americans embrace the military, less violent policy options are downplayed or disregarded. Consider the State Department, America’s diplomatic corps, now a tiny, increasingly defunded branch of the Pentagon led by Mike Pompeo (celebrated by Trump as a tremendous leader because he did well at West Point). Consider Trump as well, who’s been labeled an isolationist, and his stunning inability to truly withdraw troops or end wars. In Syria, U.S. troops were recently redeployed, not withdrawn, not from the region anyway, even as more troops are being sent to Saudi Arabia. In Afghanistan, Trump sent a few thousand more troops in 2017, his own modest version of a mini-surge and they’re still there, even as peace negotiations with the Taliban have been abandoned. That decision, in turn, led to a new surge (a “near record high”) in U.S. bombing in that country in September, naturally in the name of advancing peace. The result: yet higher levels of civilian deaths.

How did the U.S. increasingly come to reject diplomacy and democracy for militarism and proto-autocracy? Partly, I think, because of the absence of a military draft. Precisely because military service is voluntary, it can be valorized. It can be elevated as a calling that’s uniquely heroic and sacrificial. Even though most troops are drawn from the working class and volunteer for diverse reasons, their motivations and their imperfections can be ignored as politicians praise them to the rooftops. Related to this is the Rambo-like cult of the warrior and warrior ethos, now celebrated as something desirable in America. Such an ethos fits seamlessly with America’s generational wars. Unlike conflicted draftees, warriors exist solely to wage war. They are less likely to have the questioning attitude of the citizen-soldier.

Don’t get me wrong: reviving the draft isn’t the solution; reviving democracy is. We need the active involvement of informed citizens, especially resistance to endless wars and budget-busting spending on American weapons of mass destruction. The true cost of our previously soft (now possibly hardening) militarism isn’t seen only in this country’s quickening march toward a militarized authoritarianism. It can also be measured in the dead and wounded from our wars, including the dead, wounded, and displaced in distant lands. It can be seen as well in the rise of increasingly well-armed, self-avowed nationalists domestically who promise solutions via walls and weapons and “good guys” with guns. (“Shoot them in the legs,” Trump is alleged to have said about immigrants crossing America’s southern border illegally.)

Democracy shouldn’t be about celebrating overlords in uniform. A now-widely accepted belief is that America is more divided, more partisan than ever, approaching perhaps a new civil war, as echoed in the rhetoric of our current president. Small wonder that inflammatory rhetoric is thriving and the list of this country’s enemies lengthening when Americans themselves have so softly yet fervently embraced militarism.

With apologies to the great Roberta Flack, America is killing itself softly with war songs.

A retired lieutenant colonel (USAF) and professor of history, William J. Astore is a TomDispatch regular. His personal blog is “Bracing Views.”

This article is from TomDispatch.com.

31 comments for “The Militarization of Everything”