By Lucy Komisar
The Komisar Scoop

Ben Brandon and Alex Bailin are London lawyers who have co-authored a fake story based on fabrications by William Browder about Russia’s legal action against his tax evasion and the death of his accountant, Sergei Magnitsky. The writers of this London Times op ed managed to put eight lies into just five opening lines.

Co-author Brandon is the lawyer representing the U.S. in its request to extradite war-crimes whistleblower- publisher Julian Assange. This raises questions about the connection between the U.S. and the U.K. in the promotion of the Browder/Magnitsky hoax and the attack against Assange.

Here is their story. And my proof of their fabrications.

By Ben Brandon and Alex Bailin

We must not lag behind the rest of the world when it comes to holding human rights abusers and corrupt regimes to account.

Sergei Magnitsky, a young lawyer, was hired in 2008 by Bill Browder, the chief executive of Hermitage Capital, to investigate a tax fraud on his fund. Having diligently uncovered a large scale embezzlement by influential Russian officials, Mr Magnitsky was arrested and mistreated in prison in an attempt to pressure him into withdrawing his testimony.

He refused to retract and was beaten to death.

Dear Messrs Brandon and Bailin, I assume that as lawyers you think it’s a good idea to check out what people claim, since even clients lie. Therefore, please consider the evidence below, not what convicted fraudster William Browder apparently told you.

Lawyer: Magnitsky was an accountant. Browder acknowledges in his deposition in U.S. federal court 2015 that Magnitsky didn’t have a law degree or go to law school. See him say it in a video clip. In his own interrogations, Magnitsky is identified as an auditor.

Hired in 2008: Magnitsky worked for the accounting/law firm Firestone Duncan which Browder hired in 1997 to handle his company accounts and tax filings. The Russian court found that Magnitsky in the interests of Browder in 1997-2002 implemented an illegal tax evasion scheme using firms registered in Kalmykia and managed by Hermitage Capital. (See article.) Browder claims he hired Magnitsky in 2007, so Brandon and Bailin get even that fabrication wrong.

To investigate a tax fraud: See above. He was hired in 1997, 10 years before the 2007 tax refund fraud. Magnitsky’s 2006 interrogation was about Browder’s company tax evasion. See his testimony and the cited article. And the fraud wasn’t on his fund, it was on the Russian Treasury. Fraudsters scammed the Russian Treasury by obtaining a $230mil tax refund based on fraudulent lawsuits.

Uncovered embezzlement: The tax fraud, which is not properly described as an embezzlement as it was a fraud on the Russian Treasury, not on a company, was first reported by Rimma Starova in April 2008. The Russian newspaper  Vedomosti and The New York Times reported it in July 2008. Magnitsky mentioned in in testimony only in his October 2008 interrogation.

Mistreated: He suffered the same poor conditions as other inmates. There is no evidence he was pressured to withdraw testimony. Or do you have any?

The only on-site independent report, by the Moscow Public Oversight Commission, indicates terrible prison conditions and failure to provide needed medical care. The Physicians for Human Rights (Cambridge Mass) report, cites the POC report and is addressed to Browder, who gave PHR 44 documents to back up his claims. It reached the same conclusion.

Browder’s initial statements about Magnitsky’s death, in 2009 and 2010, mention no beatings.

Check out his talk at Chatham House, in your home town. “I don’t know what they were thinking. I don’t know whether they killed him deliberately on the night of the 18th, or if he died of neglect.” 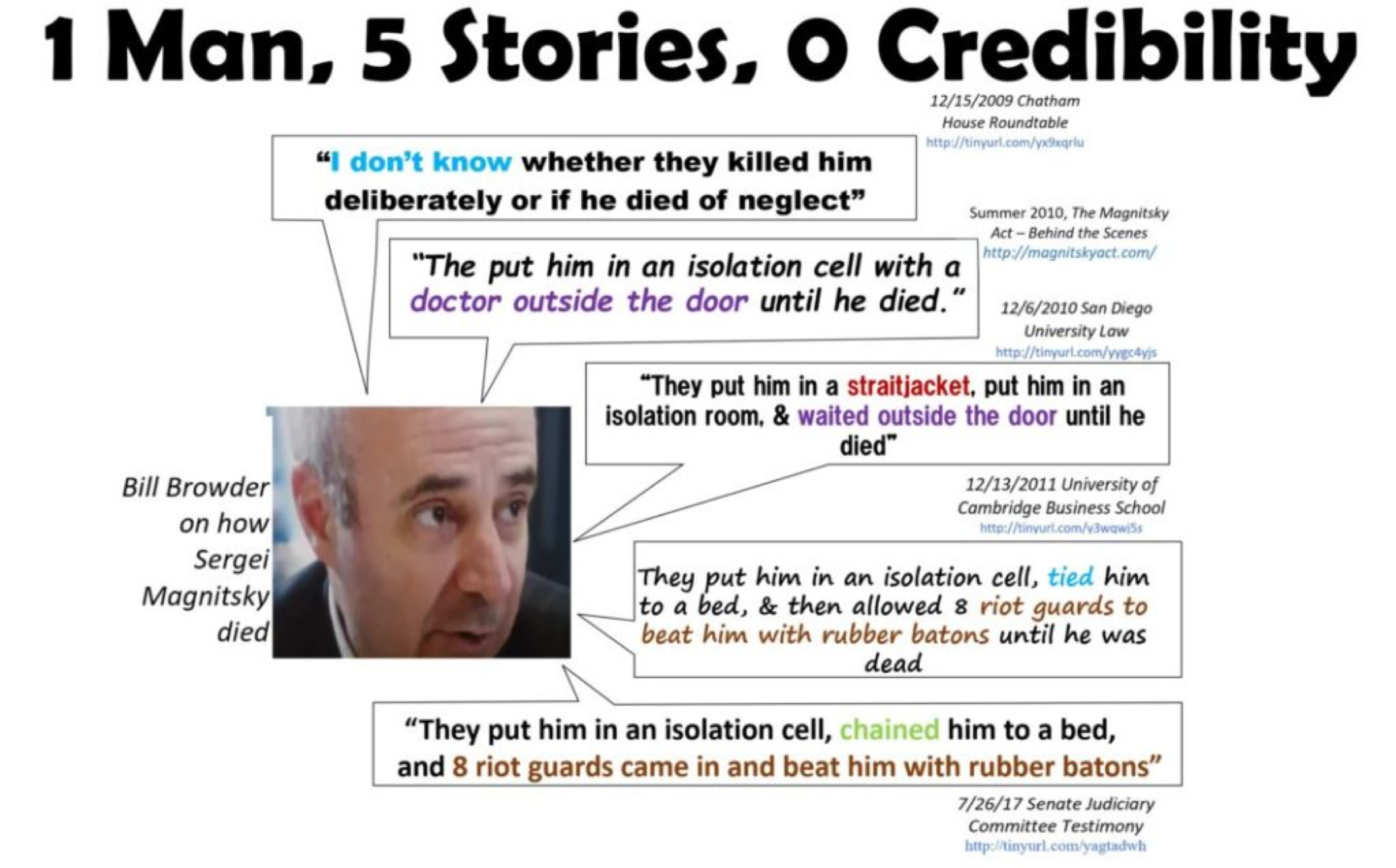 How Browder changed his stories about Magnitsky’s death. (Graphic by Michael Thau)

And the video of his address to the San Diego Law School the next year. “They put him into a straight-jacket, put him into an isolation room and waited outside the door for 1hr18 minutes until he died.”

He invented the beating death in 2011 when he decided to create and lobby for the Magnitsky Act in the U.S. Congress to stop Russian authorities from pursuing him for $100 million in evaded taxes and illicit stock buys.

Ironically, though he uses the U.S. to build a wall against Russian tax collectors, he gave up his American citizenship in 1998 to avoid paying taxes. He is listed by CBS News as a “tax expatriate.”

If you are serious lawyers and investigators, you will examine the evidence and respond. (And change your story.)

The rest of the op ed is to support unspecified steps to hold to account those who benefit from human rights abuses and corruption. No mention of the persecutors of Julian Assange or the beneficiaries of the U.K.’s worldwide system of tax havens. The real purpose appears to be to repeat the Browder hoax in the lead.

I sent copies of the article to Brandon and Bailin. No response.

I also sent a complaint to IPSO the British Independent Press Standards Organization.

Clauses breached
1 Accuracy
This op ed article is based on egregiously fake facts. See this story and the links for the evidence. I have sent it to the authors. They should retract the story. https://www.thekomisarscoop.com/2019/10/london-times-runs-fake-browder-story-by-acolytes-ben-brandon-alex-bailin/

Lucy Komisar is an investigative reporter who writes about financial corruption and won a Gerald Loeb award, the most important prize in financial journalism, for breaking the story about how Ponzi schemer Allen Stanford got the Florida Banking Dept to allow him to move money offshore with no regulation. Her stories about William Browder focus on tax evasion.  Find out more on The Komisar Scoop and on Twitter, @lucykomisar.