A month before Hillary Clinton spread the widely-believed myth that WikiLeaks had never revealed anything on Russia, the publication had already released more than a million files on the country.

This is the fifth article in a series that is looking back on the major works of the publication that has altered the world since its founding in 2006. The series is an effort to counter mainstream media coverage, which is ignoring WikiLeaks’ work, and is instead focusing on Julian Assange’s personality. It is WikiLeaks’ uncovering of governments’ crimes and corruption that set the U.S. after Assange, ultimately leading to his arrest on April 11 and indictment under the U.S. Espionage Act.

Among the many myths fostered by critics of WikiLeaks is that the publication has repeatedly shown political bias in favor of nations the U.S. treats as enemies and suppresses documents damaging to them. High on this list were Russia and Syria.

For instance, Hillary Clinton, in an interview with the Australian Broadcasting Corporation on Oct. 16, 2017, asked why WikiLeaks never publishes anything critical of Russia. “If he’s such a martyr of free speech, why doesn’t WikiLeaks ever publish anything coming out of Russia? You don’t see damaging, negative information coming out about the Kremlin on WikiLeaks,” Clinton said.

Clinton on how Russia and Assange cost her the election

Hillary Clinton says Russia and WikiLeaks colluded to bring her down. Watch the highlights from Sarah Ferguson’s Four Corners interview:

But a month before, on Sept. 19, 2017, WikiLeaks began publishing “Spy Files: Russia,”revealing among other things, the inner workings of the Russian Federation’s extensive domestic surveillance programs.

“We have published over 800,00 documents of various kinds that relate to Russia. Most of those are critical. A great many books have come out of our publications about Russia, most of which are critical, and our documents have gone on to be used in quite a number of court cases, refugee cases of people fleeing some kinds of claims of political persecution in Russia, which they use our documents to back up.”

Many of the documents Assange mentioned in his interview with Pilger are incorporated into other releases. Chief among these are “Spy Files,” a series of four releases from December 1, 2011, to September 15, 2014; “Global Intelligence Files,” more than 5 million emails from Texas-based Stratfor, published on February 27, 2012, and “Hacking Team Archives,”  more than 1 million emails published on July 8, 2015.

All of these releases concern what WikiLeaks terms the global surveillance industry. Stratfor presents itself as a publisher of geopolitical analysis but provides confidential intelligence to a variety of multinational corporations, weapons manufacturers, and government agencies such as the Homeland Security Department. Hacking Team is an Italian vendor of intelligence malware that first came to international attention whenWikiLeaks began publishing “Spy Files.” The “Hacking Team” archive includes emails concerning Ukraine as well as Russia.

The leaks were a collection of documents related to the surveillance activities of a St. Petersburg company called Peter–Service. The publication is comprised of 34 documents in various versions, bringing the total number of documents published to 209. “Spy Files: Russia” opened a window on how Russian telecommunications companies and internet service providers interact with the FSB, the Russian Federation’s primary security agency, and other state intelligence agencies, or SIAs, in developing and operating Russia’s extensive mass surveillance programs.

“Spy Files: Russia” is fifth in a series of WikiLeaks’ “Spy Files” publications. Each segment is dedicated to a different aspect of what, taken together, amounts to a global system of surveillance. The series was launched in December 2013.

“Mass interception of entire populations is not only a reality, it is a secret new industry spanning 25 countries,” Assange said when he announced “Spy Files”as an ongoing project. “It sounds like something out of Hollywood, but as of today, mass interception systems, built by Western intelligence contractors, including for ‘political opponents,’ are a reality.”

The first release, on Dec. 1, 2013, was comprised of documents from some 160 intelligence contractors operating in developed and developing countries. The second release, dated Dec. 8, 2013, provided further documentation of what WikiLeaks calls “the global mass surveillance industry.” “Spy Files 3”was comprised of 249 documents related to the business of 92 contractors with worldwide footprints. “Spy Files 4” revealed how German-made malware was sold to intelligence agencies that surveilled political dissidents, journalists, and ordinary citizens.

In the Russian surveillance system, SIAs are subject to few of the restraints customary in other countries. In particular, they are not required to obtain court orders to launch a surveillance operation. In consequence, individuals, companies, and other entities are routinely subject to threat and intimidation.

Of equal importance, Russian telecoms companies and ISPs are required by law to install a surveillance system called System for Operative Investigative Activities, or SORM by its transliterated acronym, on their premises (and at their own expense).

The SORM architecture was developed by the FSB, the Interior Ministry, and private Russian contractors, the WikiLeaks releases revealed. All local branches of the FSB are equipped with SORM technology and are connected with local ISPs. In effect, high-tech communications companies in Russia operate as appendages of Russia’s centralized intelligence apparatus. Peter–Service, the focus of “Spy Files: Russia,” is one such contractor.

As “Spy Files: Russia” explains, Peter–Service was founded 1992 and began as a supplier of electronic billing technology. It then became Russia’s leading manufacturer of the software used in the mobile telecoms industry. As of the 2017 release of “Spy Files: Russia,” the company had more than 1,000 employees in branches throughout Russia and Ukraine. By then, its technologies played a significant role in the national surveillance system.

Peter–Service also distinguished itself in this system in its approach to its obligations under Russian law to cooperate with Moscow’s surveillance operations. “Rather than being forced to comply,” WikiLeaks explains, “Peter–Service appears to be quite actively pursuing partnership and commercial opportunities with the state intelligence apparatus.”

Much was previously known, at least in outline, about the Russian Federation’s extensive surveillance programs. In “Spy Files: Russia,” the documents pertaining to Peter–Service lift the lid on the technical aspects of how these programs work. The focus of the documents is on the interface between private telecoms companies and the FSB and other SIAs. These interactions were not previously understood.

“Spy Files: Russia” also includes a slide-show presentation (then available on Peter–Service’s website) that the company delivered at the Broadband Russia Forum in 2013. Significantly, the pitch was aimed not at telecoms providers but at FSB and Interior Ministry officials, among others. The document is thus an example of Peter–Service’s unusually activist approach to collaborations with the Russian state.

“Spy Files: Russia” notes, “The presentation was written just a few months after Edward Snowden disclosed the NSA mass surveillance program and its cooperation with private U.S. IT–corporations such as Google and Facebook. Drawing specifically on the NSA Prism program, the presentation offers law enforcement, intelligence, and other interested parties to join an alliance in order to establish equivalent data-mining operations in Russia.”

WikiLeaks’ media partners for “Spy Files: Russia” were La Repubblica, the Rome daily, and Mediapart, a French online publication. Coverage of the release was sparse, and there appears to have been no official reaction. In the U.S., Wired magazine carried the only detailed overview of the publication. 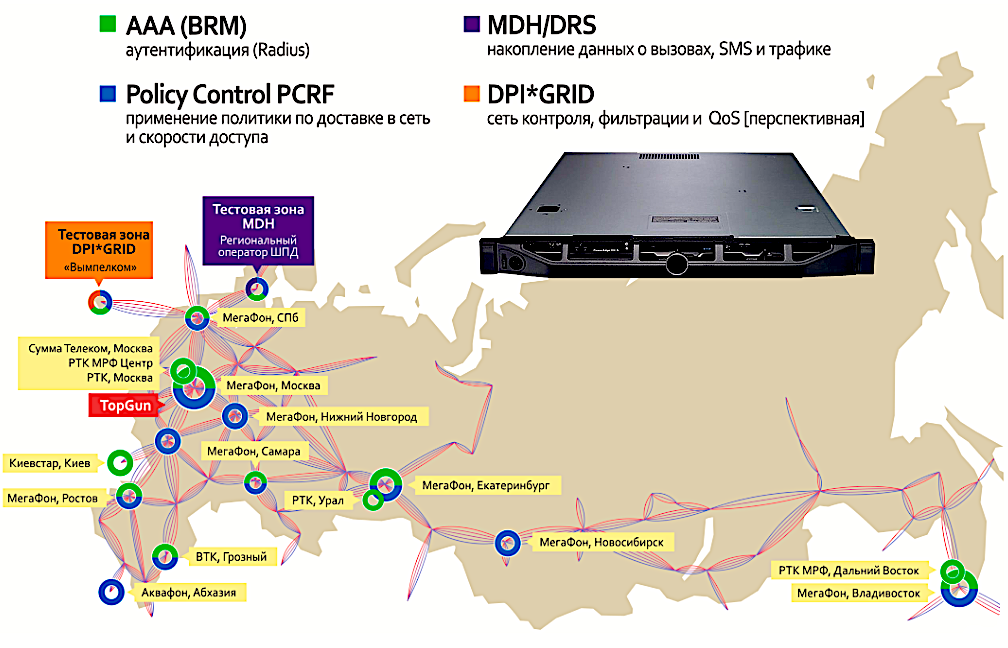 Graphic shows the Internet backbone infrastructure in Russia and the nodes at various providers that run components of the proposed DPI*GRID system in different locations. The node TopGun most likely refers to a multi terabit DPI system developed by PETER-SERVICE. (WikiLeaks)

“The WikiLeaks documents reinforce a bigger picture of modern Russian surveillance that combines technical mechanisms with legislative pressure,” the Wiredreporter wrote. Referring to the public-private collaboration of “Spy Files: Russia” documents, the report added, “Whereas a country like China uses elaborate technological solutions first and foremost (the Great Firewall) to restrict access to information, Russia employs a more hybrid approach.”

The publication of “Spy Files: Russia” was followed by one year the WikiLeaks release of mail caches from the Democratic National Committee and Hillary Clinton’s presidential campaign. During the interim it was alleged, without evidence, that two Russian intelligence agencies had hacked the Democrats’ servers and that WikiLeaks collaborated with Russia in publishing the downloaded emails. The media’s uncritical acceptance of these assertions reflected its heightened hostility toward WikiLeaks.

A month prior to the release of “Spy Files: Russia,” for instance, Foreign Policy magazine reported that in the summer of 2016, following the publication of Democratic Party emails, WikiLeaks had obtained but did not publish “a wide-ranging trove of documents—at least 68 gigabytes of data—that came from inside the Russian Interior Ministry.”

FP cited “partial chat logs” that it had “reviewed.” These “were provided,” the magazine said by a source it neither named nor identified in even the broadest, most protective terms. FP offered no more substantive accounting of the material on which it rested its assertions.

In this context, Wired questioned whether “Spy Files: Russia” was approved by the Russian government to counter the charges that WikiLeaks had colluded with Moscow in releasing Democratic Party emails during the 2016 elections in the U.S. It quoted James Andrew Lewis of the Center for Strategic and International Studies and a former foreign-service officer as saying, “These are tricks that the Russians were willing to give up.” Neither Lewis nor Wired offered evidence substantiating this assertion, which ignored that WikiLeaks had already published nearly a million Russia-related files before the 2016 election.

8 comments for “The Revelations of WikiLeaks: No. 5 — Busting the Myth WikiLeaks Never Published Damaging Material on Russia”