The FBI’s arrest is just the latest example  of “blowback,” when U.S. support for extremist foreign proxies fuels violent terrorism back at home, reports Ben Norton.

A far-right soldier in the United States Army has been arrested by the FBI for plotting bomb attacks on American media outlets and Democratic politicians.

While serving in the U.S. military, this right-wing extremist gave fascist militants in Ukraine and other countries information on how to build bombs, including what he called “cell phone IEDs in the style of the Afghans.”

The FBI said he had also planned to travel to Ukraine in order to join the Azov Battalion, a neo-Nazi militia that has for years been directly supported by the U.S. In its court filing, the FBI described the Azov Battalion as a “violent far-right paramilitary group.” Yet it failed to disclose that this fascist militia has been armed and advised by U.S. military officials in order to turn up the heat on Russia.

Publicly available photos show U.S. military advisers directly meeting with the Ukrainian neo-Nazi militia — but the complete lack of critical coverage from a compliant mainstream media has ensured that few Americans know about their government’s double game with fascists. 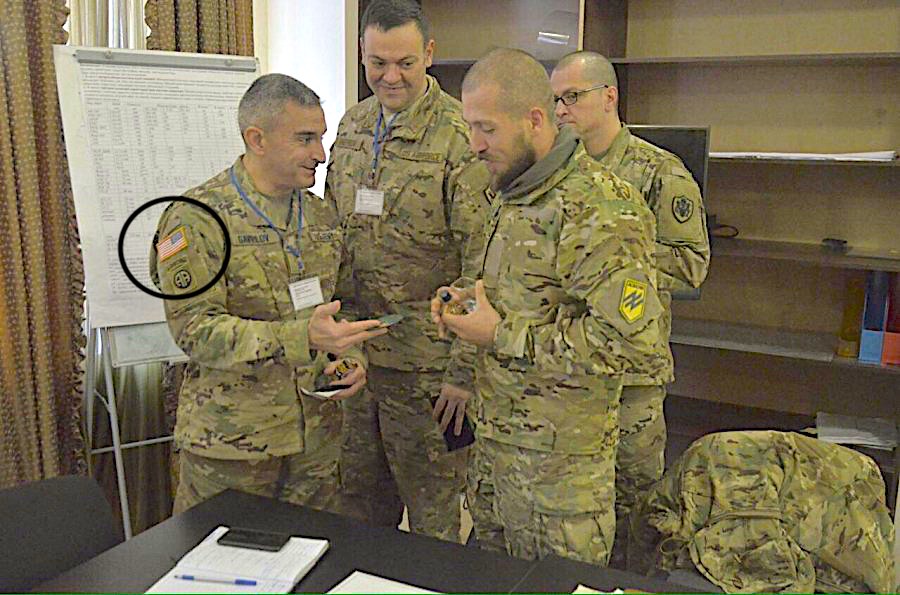 The U.S. soldier’s arrest is the latest in a long list of cases of what intelligence agencies refer to as “blowback,” when U.S. support for extremist foreign proxies fuels violent terrorism back at home.

Teaching Extremists How to Make Bombs

The FBI filed a criminal complaint in Kansas district court on Monday, Sept. 23, revealing that it had arrested U.S. Army infantry soldier Jarrett William Smith for the alleged crime of “distributing information relating to explosives, destructive devices, and weapons of mass destruction.”

In online messages with an FBI informant, Smith discussed carrying out terrorist attacks inside the U.S., and said he was looking for fellow far-right “radicals.” He also talked about killing members of Antifa, a decentralized anti-fascist group.

According to the filing, Smith had since at least 2016 been in regular communication with Craig Lang, an American far-right extremist who traveled to Ukraine to fight with the neo-fascist militia the Right Sector.

Smith had initially hoped that Lang could help screen him and get him approval to join Ukraine’s radical right.

Smith told Lang in June 2016, before he enlisted in the U.S. Army, “No former military experience, but if I cannot find a slot in Ukraine by October I’ll be going into the Army … To fight is what I want to do.”

Apparently unable to find an opportunity in Ukraine, Smith joined the U.S. Army in June 2017.

While in the U.S. military, Smith repeatedly shared tips and tricks with Lang and other right-wing extremists in social media chats on how to build bombs.

In a Facebook group with Lang and others in December 2018, Smith boasted of his ability to create improvised explosive devices (IEDs), writing, “I got knowledge of IEDs for days. We can make cell phone IEDs in the style of the Afghans. I can teach you that.”

Following the arrest of Jarrett William Smith, CBS reported that the U.S. Army soldiers had discussed “traveling to Ukraine to fight with a violent far-right group.” Like other corporate media outlets, CBS offered nothing more than a perfunctory account that failed to identify the specific extremist Ukrainian militia.

In its criminal complaint, however, the FBI wrote that Smith had “spoken about his desire to travel to Ukraine to fight with the Ukraine-based violent far-right paramilitary group, Azov Battalion.” 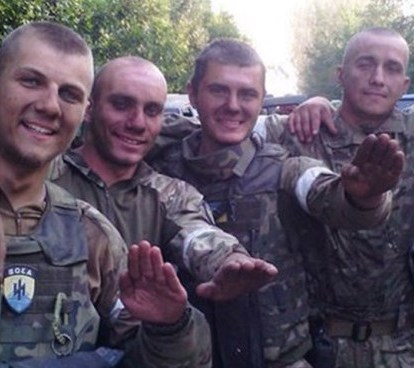 What the FBI did not mention is that the U.S. has for years supported the Azov Battalion as a proxy against Russia and its regional allies.

Since a U.S.-backed 2014 coup overthrew Ukraine’s democratically elected government and installed a viciously anti-Russian and pro-NATO right-wing government, Kiev has been battling pro-Russian separatists in the east of the country.

Neo-fascist Ukrainian groups like Right Sector and Svoboda played a major role in this Western-backed regime change operation. In the violence following the putsch, these forces cohered into neo-Nazi militias like the Azov Battalion and C14 (named after the white supremacist “14 words” slogan).

In 2014, the Azov Battalion was directly incorporated into Ukraine’s National Guard, merging the explicitly fascist militia with the Ukrainian Ministry of Interior and military.

The United States strongly backs Ukraine and has given it significant military support. Many of the weapons provided by Washington have ended up in the hands of avowed neo-Nazis.

The Grayzone has repeatedly reported on U.S. support for these neo-Nazis forces, including both Azov and C14.

In 2018, Grayzone Editor Max Blumenthal reported on a meeting between U.S. military advisers and the Azov Battalion.

The fascist Ukrainian militia had published photos on its website in November 2017 showing uniformed American and Canadian military officers shaking hands with an Azov officer, who was wearing a patch of the Nazi-inspired symbol the Wolfsangel.

In July 2018, Ukraine’s embassy in Israel attacked Blumenthal and The Grayzone for reporting factually on how the neo-Nazi Azov Battalion was also using Israeli weapons in the field.

In its report on the arrest of the extremist U.S.  Army soldier, Jarrett William Smith, the legal news website Law & Crime described the Avoz Battalion as a “violent far-right terrorist group.”

It failed to mention that the U.S. has directly supported this violent far-right terrorist group, however.

Smith is not the first far-right American extremist to have plotted violent attacks with U.S. -backed Ukrainian fascists.

In November, Gray-zone Editor Max Blumenthal reported on an FBI indictment of four American white supremacists from the violent neo-fascist Rise Above Movement (RAM), who had trained with Ukraine’s Azov Battalion.

The FBI said in its indictment that Azov “is believed to have participated in training and radicalizing United States-based white supremacy organizations.”

This is reminiscent of blowback from American support for far-right extremist Islamist groups in the Middle East and Latin America who subsequently carried out acts of terrorism inside the U.S.

While few corporate media outlets have been willing to acknowledge U.S. support for neo-Nazi groups like Azov, the growing danger of blowback has propelled a burst of critical reporting about the militias.

Back in 2014, Vice Media promoted the Ukrainian neo-Nazis, whitewashing and even directly embedding with them while they were fighting pro-Russian separatists.

But five years later, Vice has done a volte-face. This July, the news outlet published an article warning that battle-hardened far-right extremists who trained in Ukraine were returning home to the U.S. and Europe, with violence on their minds.

Ben Norton is a journalist and writer. He is a reporter for The Grayzone, and the producer of the “Moderate Rebels“ podcast, which he co-hosts with Max Blumenthal. His website is BenNorton.com, and he tweets at @BenjaminNorton.