Russophobic rhetoric persists in Washington, but a counter-argument is emerging.

Are Western democracies, the U.S. and France in the lead, rethinking the hostility toward Russia they conjured out of nothing since Moscow responded to the coup Washington cultivated in Ukraine five years ago? Will Trump eventually succeed in putting ties with Russia on a more productive path — triumphing over the hawks hovering around him? Have the Europeans at last grown weary of following the U.S. lead on Russia even as it is against their interests to do so?

In desultory fashion over the past month or so, we have had indications that the policy cliques in Washington are indeed reconsidering the Cold War II they set in motion during the Obama administration’s final years. And President Donald Trump, persistent in his effort to reconstruct relations with Russia, now finds an unlikely ally in Emmanuel Macron. This suggests a nascent momentum in a new direction.

“Pushing Russia away from Europe is a profound strategic mistake,” the French president asserted in a stunning series of remarks to European diplomats immediately after the Group of 7 summit in Biarritz late last month.

This alone is a bold if implicit attack on the hawkish Russophobes Trump now battles in Washington. Macron then outdid himself: “We are living the end of Western hegemony,” he told the assembled envoys.

It is difficult to recall when a Western leader last spoke so truthfully and insightfully of our 21stcentury realities, chief among them the inevitable rise of non–Western nations to positions of parity with the Atlantic world. You have nonetheless read no word of this occasion in our corporate media: Macron’s startling observations run entirely counter to the frayed triumphalism and nostalgia that grip Washington as its era of preeminence fades. 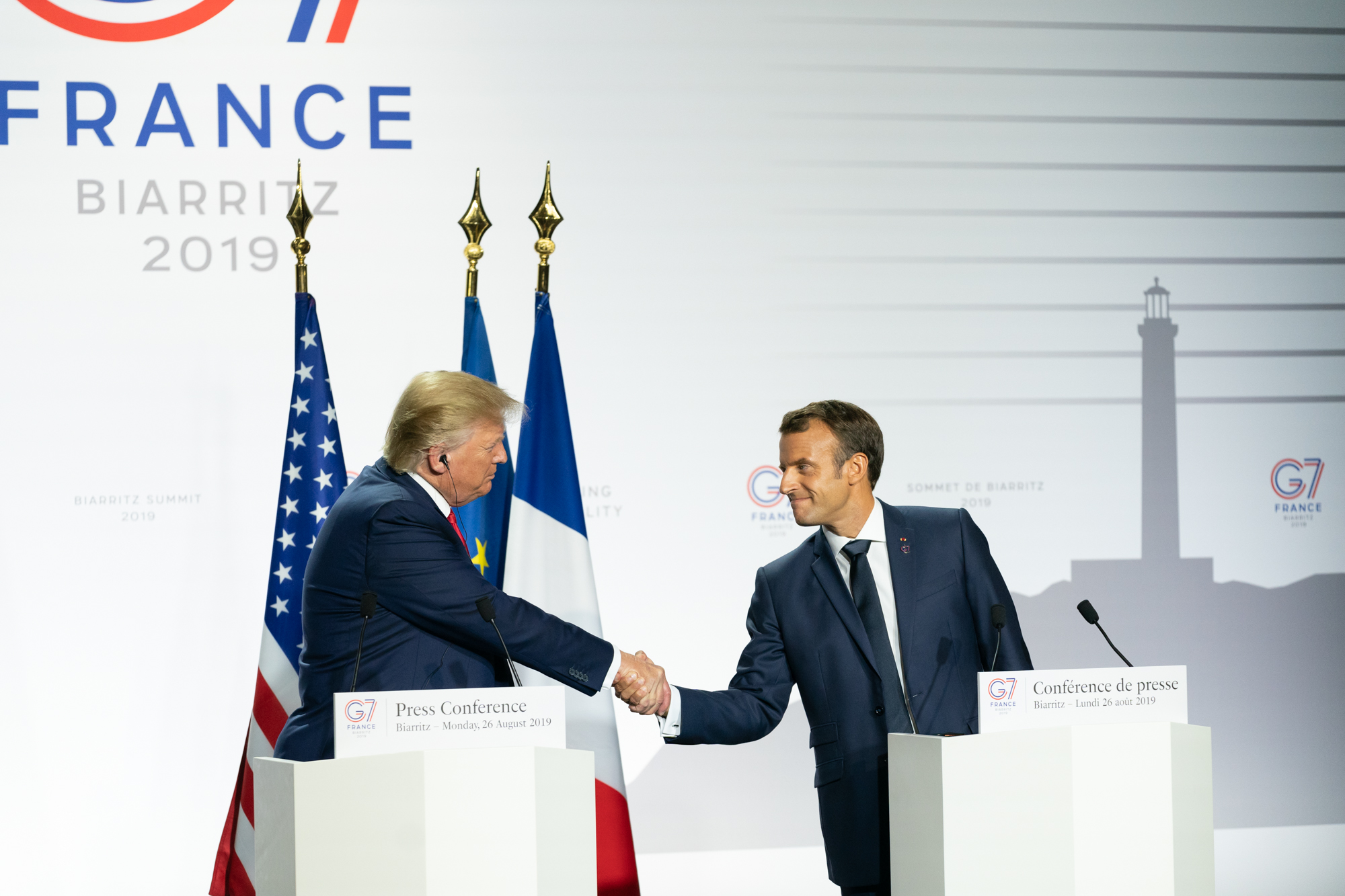 There is much to indicate that the West’s aggressively hostile posture toward Russia remains unchanged. The Russophobic rhetoric emanating from Washington and featured daily in our corporate television broadcasts continues unabated. Last month Washington formally abandoned the bilateral treaty limiting deployment of intermediate-range ballistic missiles, signed with Moscow in 1987. As anyone could have predicted, NATO now suggests it will upgrade its missile defense systems in Poland and Romania. This amounts to an engraved invitation to the Russian Federation to begin a new arms race.

But a counter-argument favoring a constructive relationship with Russia is now evident. This is not unlike the abrupt volte-face in Washington’s thinking on North Korea: It is now broadly accepted that the Korean crisis can be resolved only at the negotiating table.

The Times Are Changing

The New York Times seems to be on board with this this sharp turn in foreign policy. It reported the new consensus on North Korea in a news analysis on July 11. Ten days later it published another arguing that it’s time to put down the spear and make amends with Moscow. Here is the astonishing pith of the piece: “China, not Russia, represents by far the greater challenge to American objectives over the long term. That means President Trump is correct to try to establish a sounder relationship with Russia and peel it away from China.”

It is encouraging that the Times has at last discovered the well-elaborated alliance between Moscow and Beijing. It took the one-time newspaper of record long enough. But there is another feature of this article that is important to note: It was published as a lead editorial. This is not insignificant.

It is essential, when reading the Times, to understand the close — not to say corrupt — relations it has maintained with political power in Washington over many generations. This is well-documented in histories of the paper and of institutions such as the CIA. An editorial advancing a policy shift of this magnitude almost certainly reflects the paper’s close consultations, at senior levels of management, with policy-setting officials at the National Security Council, the State Department, or at the Pentagon. The editorial is wholly in keeping with Washington’s pronounced new campaign to designate China as America’s most dangerous threat.

It is impossible to say whether Trump is emboldened by an inchoate shift of opinion on Russia, but he flew his banner high at the Biarritz G–7. Prior to his departure for the summit in southwest France he asserted that Russia should be readmitted to the group when it convenes in the U.S. next year. Russia was excluded in 2014, following its annexation of Crimea in response to the coup in Kiev.

Trump repeated the thought in Biarritz, claiming there was support among other members for the restoration of the G–8. “I think it’s a work in progress,” he said. “We have a number of people that would like to see Russia back.”

Macron is plainly one of those people. It was just after Trump sounded his theme amid Biarritz’s faded grandeur — and what an excellent choice for a convention of the Western powers — that the French president made his own plea for repairing ties with Russia and for Europe to escape its fate as “a theater for strategic struggle between the U.S. and Russia.” 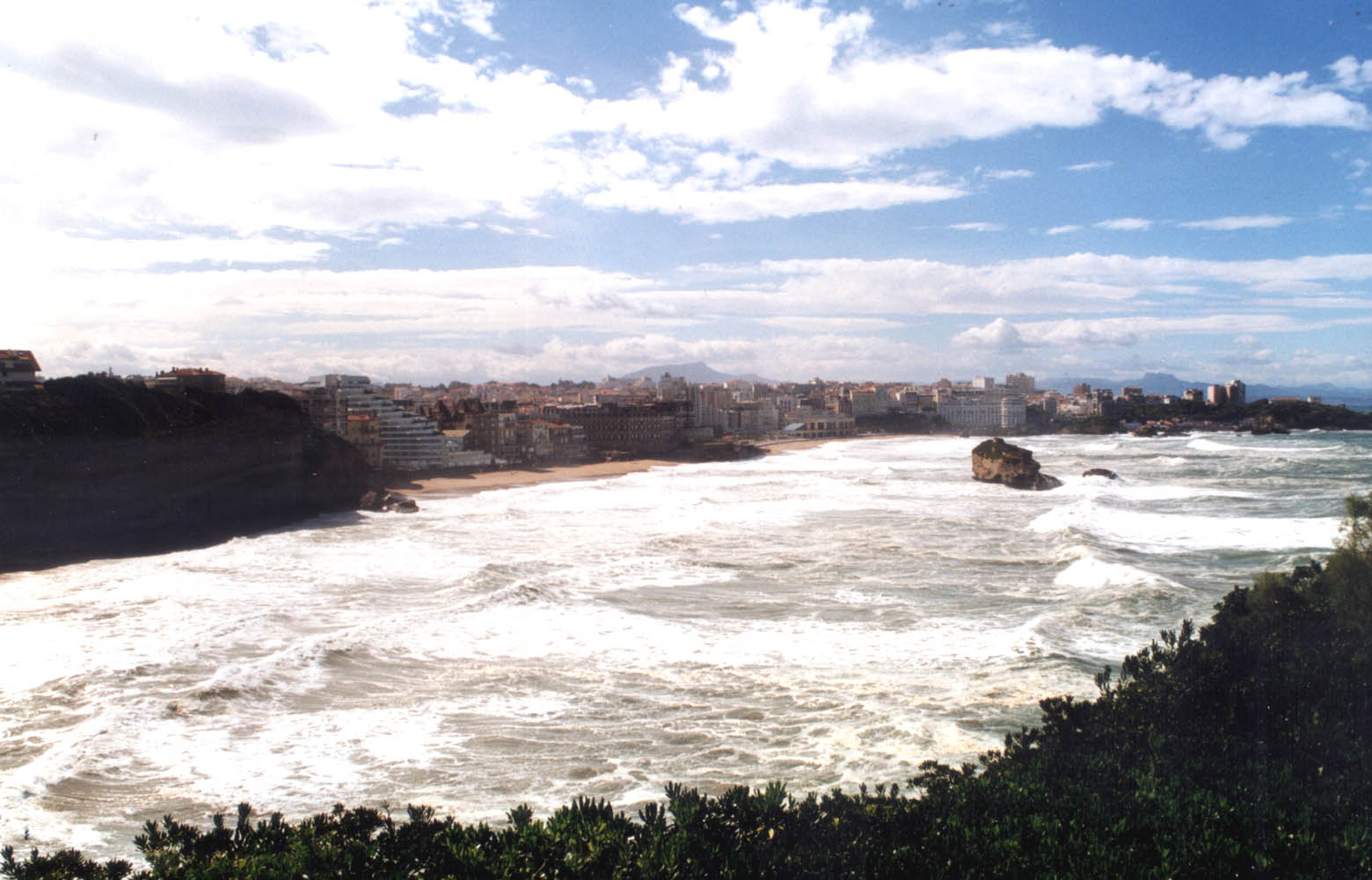 “The European continent will never be stable, will never be secure, if we don’t pacify and clarify our relations with Russia,” Macron said in his address to Western diplomats. Then came his flourish on the imminent end of the Atlantic world’s preeminence.

“The world order is being shaken like never before. It’s being shaken because of errors made by the West in certain crises, but also by the choices made by the United States in the past few years— and not just by the current administration.”

Macron is an opportunistic main-chancer in European politics, and it is not at all certain how far he can or will attempt to advance his new vision of either the West or Europe in the Continent’s councils of state. But as evidence of a new current in Western thinking about Russia, the non–West in general, and Europe’s long-nursed desire for greater independence from Washington, the importance of his comments is beyond dispute.

The question now is whether or how soon better ties with Moscow will translate into practical realities. At present, Trump and Macron share a good idea without much substance to it.

Better US-Russia Ties May Be in Pipeline

But Trump may have taken a step in the right direction. Within days of his return from Biarritz, he put a hold on the Ukraine Security Assistance Initiative, a military aid program that was to provide Kiev with $250 million in assistance during the 2019 fiscal year, which begins Oct. 1 and runs to Sept. 30, 2020. The funds are designated for weaponry, training and intelligence support.

Trump has asked his national security advisers to review the commitment. The delay, coming hard on his proposal to readmit Russia to a reconstituted G–8, cannot possibly be read as a coincidence.

There will be other things to watch for in months to come. High among these is Trump’s policy toward the Nord Stream 2 pipeline linking Russian gas fields to terminals in Western Europe, thereby cutting Ukraine out of the loop. Trump, his desire to improve ties with Moscow notwithstanding, has vigorously opposed this project. The Treasury Department has threatened sanctions against European contractors working on it. If Trump is serious about bringing Russia back into the fold, this policy will have to go. This may mean going up against the energy lobby in Washington and Ukraine’s many advocates on Capitol Hill.

To date, U.S. threats to retaliate against construction of Nord Stream 2 have done nothing but irritate Europeans, who have ignored them, while furthering the Continent’s desire to escape Washington’s suffocating embrace. This is precisely the kind of contradiction Macron addressed when he protested that Europeans need to begin acting in their own interests rather than acquiesce as Washington force-marches them on a never-ending anti–Russia crusade.

Macron may prove a pushover, or a would-be Gaullist who fails to make the grade. Or he may have just announced a long-awaited inflection point in trans–Atlantic ties. Either way, he has put highly significant questions on the table. It will be interesting to see what responses they may elicit, not least from the Trump White House.

63 comments for “PATRICK LAWRENCE: The Establishment is Changing its Tune on Russia”