By John Wight
in Edinburgh, Scotland
Special to Consortium

Trump’s otherworldly vice president, Mike Pence, has just said more in one short sentence to unravel the complexities of the Brexit crisis that continues to bedevil the UK, than the ocean of column inches that have been devoted to the subject since the referendum was held in 2016.

Speaking at a black tie event in London on Thursday night, attended by an array of business executives, Pence proclaimed, “The minute the UK is out, America is in.”

Pence, a man who stands as living proof that human evolution is not wedded to an ever upwards path, delivered these words with the bombast of a Roman proconsul addressing the notables of a soon-to-be client state.

Thus let there be no doubt that the hard no-deal Brexit advocated by the UK’s newly installed Prime Minister Boris Johnson and his supporters is to all intents a Trump Brexit – one that will see the UK economy opened up to the tender mercies of U.S. corporations on terms set not by London but Washington. 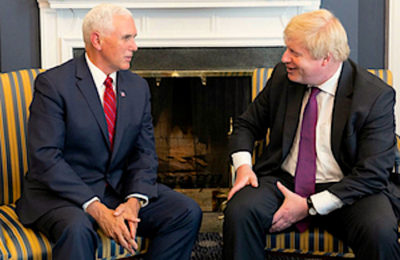 Pence meeting Johnson in Washington in May 2018. (Prime Minister’s office)

In other words, we’re talking disaster capitalism on steroids, bringing with it the likely prospect of the decimation of what’s left of the UK’s welfare state, including that most revered totem to social solidarity, the National Health Service (NHS), which since the end of WWII, when it was established, has provided generations of British citizens with free healthcare at the point of need, funded out of general taxation, regardless of social class or personal wealth.

The NHS is therefore a socialist institution in all but name, which Johnson and his privileged right wing establishment acolytes in the hard Brexit camp would sooner see broken up and sold off to U.S. insurance companies in sacrifice to their god, the market. This is regardless of any and all assurances given to the contrary.

“Believers in the shock doctrine [of disaster capitalism] are convinced that only a great rupture – a flood, a war, a terrorist attack – can generate the kind of vast, clean canvases they crave,” while earlier in the same passage, warning that “This desire for godlike powers of total creation is precisely why free market ideologues are so drawn to crises and disasters.”

A no deal Brexit, which means to say a complete break from the EU with no trade relationship in place, offers the perfect storm of economic shock, and, with it, vulnerability that would turn the UK, currently the fifth largest economy in the world, into a prized dripping roast offered up to U.S. corporations to feast upon. [Parliament on Friday passed a bill blocking a no-deal exit and it goes to Buckingham Palace on Monday for royal assent but it remains to be seen if Johnson will abide by it.]

As things stand, the EU is the UK’s largest single trading partner, the destination of 46 percent of British exports and from where 54 percent of British imports emanate. Three million jobs across the UK are directly dependant on this trade, not to mention supply chains and much of the country’s inward investment. 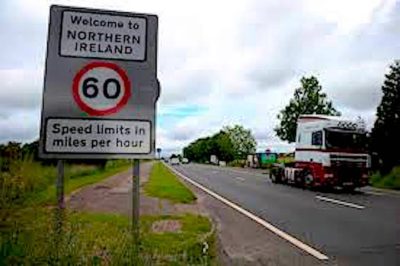 This is without factoring in the precarious peace in Northern Ireland, which has been extant since 1998 upon the passage of the Belfast Agreement (also known as the Good Friday Agreement) between the UK and Irish governments, along with the leaderships of the main republican and loyalist paramilitary groups that were engaged in the 30-year long conflict, known as the Troubles.

The spectre of the re-imposition of a hard border – removed as a condition of the Belfast Agreement, between the six counties that make up Northern Ireland and the 26-county Irish Republic – due to the new custom arrangements that would ensue, brings with it the very real prospect of a resumption of violence in the province. 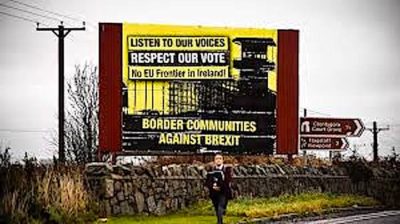 On this, be in no doubt that the reactionary wing of the British Tory establishment represented by Johnson and Jacob Rees-Mogg et al., has never fully reconciled itself to the Good Friday Agreement. To them, and much of the British security apparatus, it is tantamount to a surrender document, rooted in the appeasement of terrorism. As such the prospect of British troops reappearing on the streets of Belfast, Derry and other towns in Northern Ireland, is not one that they could not live with.

Even Closer to the Empire

The possibility of a hard no-deal Brexit does not only carry dire domestic consequences for the UK vis-à-vis Washington. It also guarantees that London will be dialed into U.S. geo-strategic objectives in such a way as to make the country’s subordination to the empire complete.

We have already been treated to an example of what this would be like when, at the behest of the Trump administration, British Royal Marines seized the Iranian oil tanker, Grace 1, in the Straits of Gibraltar and forced it to dock in the British-controlled territory.

It was an act of pure piracy undertaken in clear violation of international law, which only confirmed that in Washington the neocons have retaken control of the asylum.

Ultimately, a grim future beckons for the UK in the event of a hard no deal Brexit. It is why the crisis has reached its most critical point; the outcome of which will have ramifications and far reaching consequences for many years to come.

Indeed it is no exaggeration to assert that the day after a no-deal Brexit comes to pass, the train of Scottish independence will come hurtling down the track.

← Consortium News is Back Online After Five Days
PEPE ESCOBAR: On the Road to Interview Lula, Into a Brazilian Black Hole →

44 comments for “A Trump Brexit Threatens”