The closer we get to victory, the more politicians in the service of  profiteering industries will pitch marketing scams, write Kevin Zeese and  Margaret Flowers.

Some of the Democratic presidential candidates during a July primary debate.

In 1965, President Lyndon Johnson signed the Medicare Act. Within a year, and without the aid of computers, the United States provided more than 19 million seniors with health coverage. Before the law existed, over half of the elderly in the United States did not have health insurance. Medicare, which now includes people with disabilities, just celebrated its 54th birthday.

Today, the U.S. is on the verge of another transformation. Thirty million people do not have health insurance and thousands of people die annually because of that sad fact. The healthcare crisis is also demonstrated by the separate but unequal reality that wealthy people in the U.S. live 15 years longer than poor people.

National improved Medicare for All (NIMA) has become a litmus test issue in the Democratic Party primary for president. While corporate Democrats funded by Wall Street, the insurance and pharmaceutical industries are trying to stop progress, Democratic voters are showing the momentum may not be stoppable. 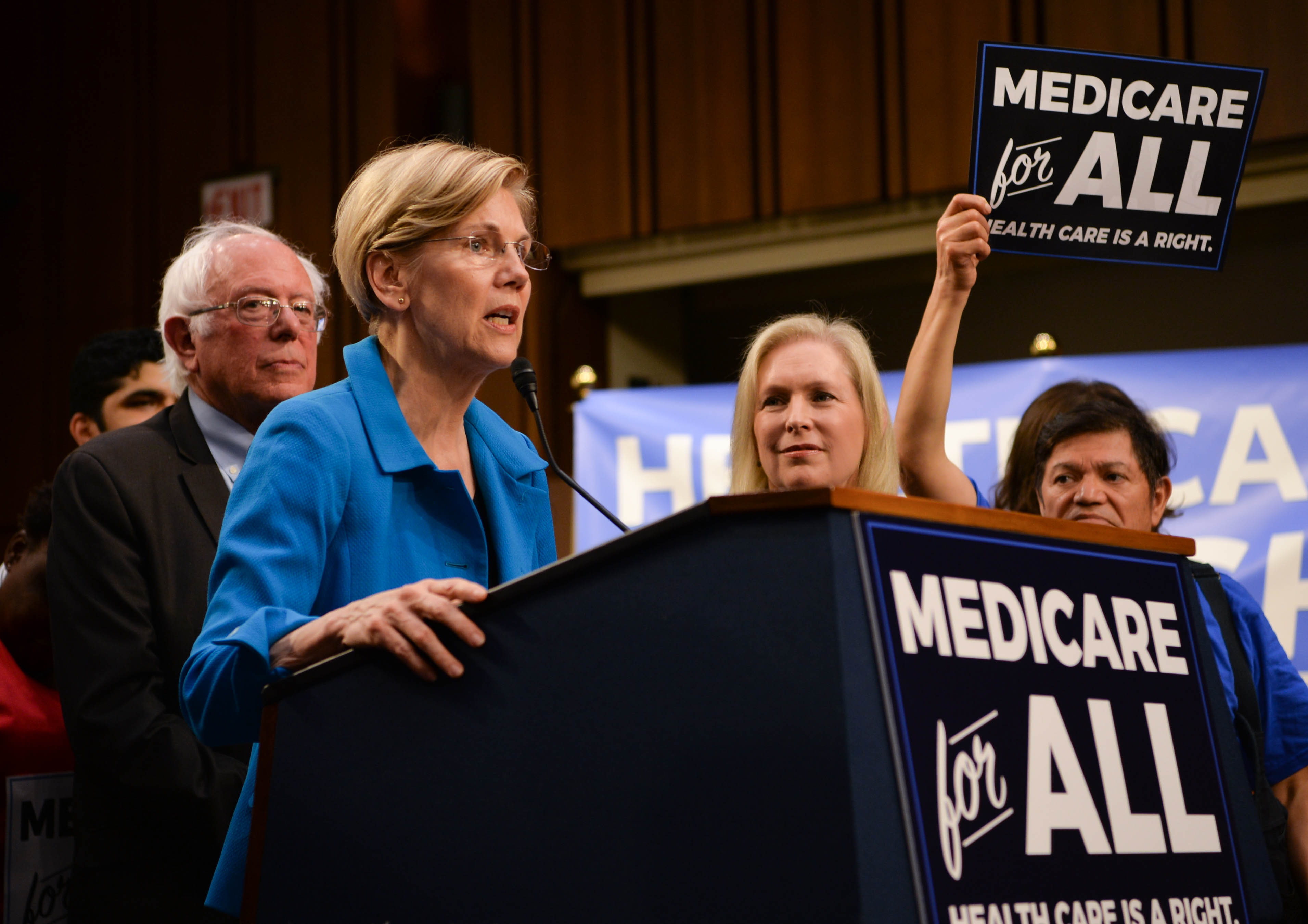 The two leading Medicare-for-All candidates, Sen. Bernie Sanders, and Sen. Elizabeth Warren, have received the most donations of all the other candidates. One-in-three donors to the Democratic primaries donated to Sanders. This broad base of support is consistent with polls that show Democratic voters have reached a consensus: NIMA is essential. These voters have the power to nominate candidates who support Medicare for All if they insist on it. This consensus is the result of years of work by single-payer advocates. This is a movement that will not compromise in support of false solutions.

The Medicare for All Act not only expands health coverage to everyone from birth to death, but also improves Medicare for seniors by including more benefits such as dental, vision, hearing and long-term care. And, it does this without requiring premiums, co-pays or deductibles, saving people more than $300 billion annually in out-of-pocket costs.

All doctors, hospitals and other providers will be in a Medicare for All system so people will have complete choice of health services. Patients will not be limited by the narrow insurance industry networks, which often exclude cancer and other specialty centers – places people go when they are ill – to avoid paying for health care. Medicare for All means complete coverage, complete choice and freedom to change jobs or quit a job without fear of losing health coverage.

Improved Medicare for All creates hundreds of billions of savings that more than offset the increased costs of covering everyone and eliminating out-of-pocket expenses. In addition to reducing administrative waste, Medicare for All allows the federal government to negotiate with pharmaceuticals and providers to bring down the prices of care.

There are many ways to pay for Medicare for All. Congress routinely goes into debt to fund wars and militarism, so it is strange that for something as essential as healthcare cost is an issue. If increased taxes are needed, there have been a variety of proposals for progressive taxes. These proposals show that all but the wealthiest will pay less for healthcare under improved Medicare for all. Households earning under $130,000 per year would save the most money.

Currently, the U.S. spends 18 percent of its GDP on healthcare and spending is rising faster than inflation and wages. This is an unsustainable expenditure that will be reduced with an improved Medicare for All system. Other wealthy countries with single-payer health systems generally spend less than 11.5 percent of their GDP on healthcare.

Medicare for All is good for businesses because they will no longer be subject to unpredictable increases in insurance costs. It is also good for the economy. Warren Buffett says our current healthcare system is a tapeworm on the U.S. economy and describes health care as a real problem for U.S. businesses.

The strategy of the industries that profit from healthcare is to confuse people with false information and false proposals that sound like Medicare for All. They create front groups to create the illusion of support for their proposals and donate to politicians who advocate for their interests.

These false proposals, like the one promoted by the so-called Center for American Progress, are designed to protect the industry, not fix the healthcare crisis. The Democratic leadership is addicted to insurance, pharmaceutical, and healthcare dollars. The people must be organized to defeat the industry and put in place the system we need.

Sen. Kamala Harris recently put forward a terrible policy proposal, which she called Medicare for All. The proposal has two major flaws. First, it requires a 10-year transition to improved Medicare for All. This is unnecessary as the Medicare system already exists and we are already spending enough on health care to cover everyone. There is no need for long delays. Second, she allows insurance industry theft of the Medicare for All system by including “Medicare Advantage” plans (these are private insurance plans).

Medicare Advantage is a heavily marketed scam on the elderly that costs the government more money than traditional Medicare and has the same flaws as private insurance. This proposal is bad policy and bad politics and should result in the defeat of Harris.

The most common false proposal is some form of a “public option.” Mayor Pete Buttigieg, one of Wall Street’s favorite candidates, calls this “Medicare for those who want it.” We call it “Medicare for some, not Medicare for all.”  A public option does not fix the system, it makes it worse by adding another insurance plan to an already too complex system. It foregoes 84 percent of the savings that a single-payer system would achieve.

Former Vice President Joe Biden, the biggest recipient of donations from the industry, is another who refuses to advocate for what Democratic voters want. Biden continues to put forward false arguments against Medicare for All. He is stuck in the past and focused on saving the Affordable Care Act, or ACA.

Neither Republicans nor Libertarians are putting forward any healthcare plan, which resulted in Republicans losing in 2018. The Green Party has advocated for single-payer health care since the start. Ralph Nader ran on a platform that included Medicare for All as early as 2000.

Congress Must Do More

In addition to stopping the false non-solution promoted by corporate Democrats, the movement must push to improve both the House and Senate Medicare for All bills.

The Senate bill, SB 1129, sponsored by Sanders and 14 senators, is flawed in very serious ways. It needs to expand coverage of long-term care, provide global budgeting for hospitals and end the massive insurance loopholes of managed care structures like Accountable Care Organizations (ACO’s), which function like insurance plans.

The House bill is better but still needs improvement. Both the House and Senate bills need to end commodification of health care by eliminating for-profit hospitals and other facilities. The for-profits can be purchased by the healthcare system using a Treasury Bill financed over 15 years at a cost of 1 percent of total health spending. If the for-profits are kept in and regulated, as the House bill does, it is likely the owners will sell them or convert them to profit-making entities like condominiums as is happening in Philadelphia. The House bill needs to shrink the transition from two years to one year, and the Senate bill needs to shrink the 4-year transition currently proposed.

On Verge of Winning 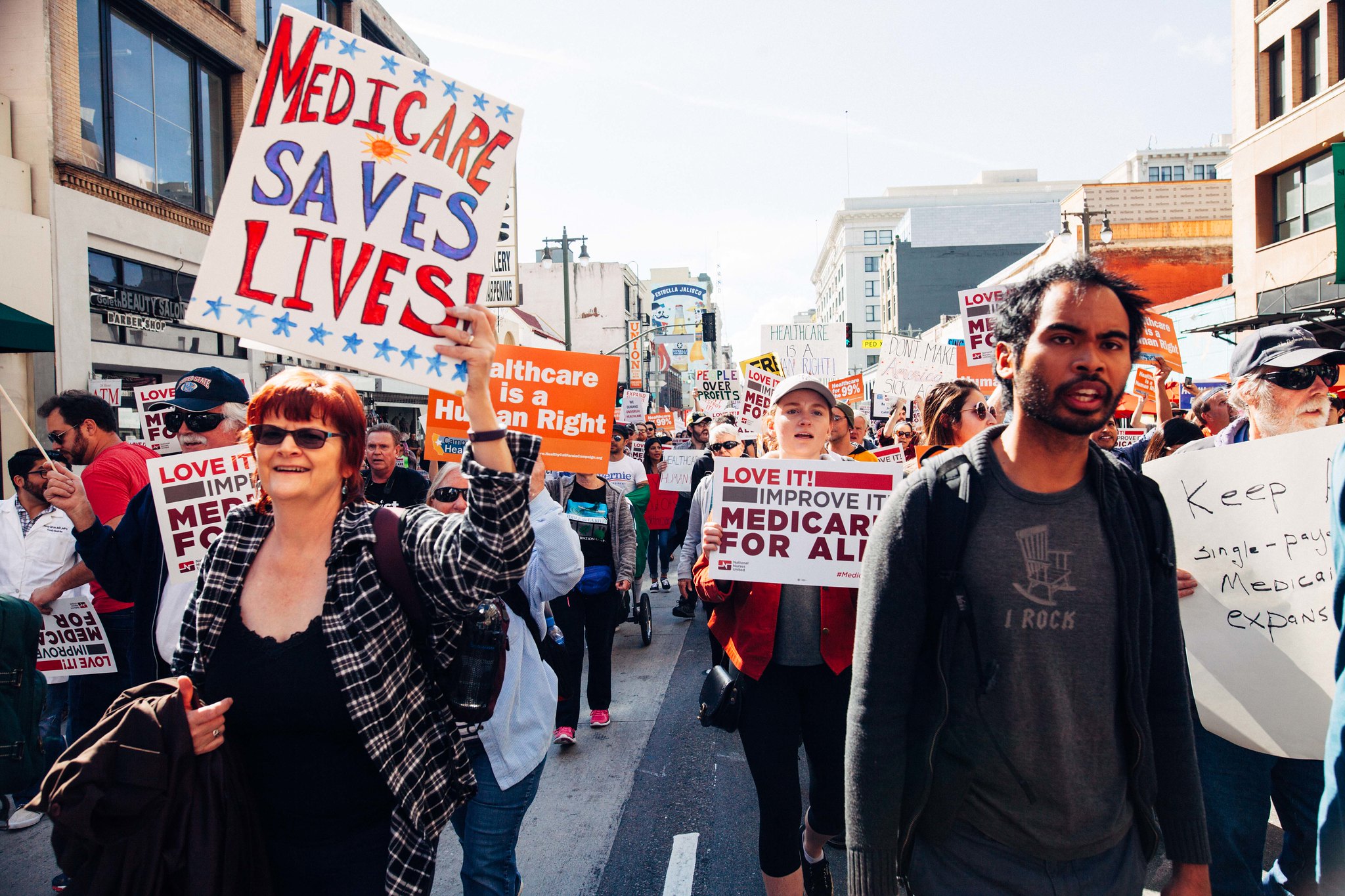 There are many signs that we are on the verge of winning the urgent and essential policy change of national improved Medicare for All.

The single payer movement has the power to win improved Medicare for All if it doesn’t back down. The closer we get to victory, the more the profiteering industries will fight us. In the Popular Resistance School for Social Transformation, we describe this push back as part of the process of winning, and we teach how movements can defeat the strategies of those who seek to maintain the status quo.

There are still hurdles before us, but if the movement continues to work to educate voters as well as to organize and mobilize, we will create a political environment where politicians across the political spectrum must support health care as a human right as embodied in an improved Medicare for All health system.

Medicare for All Facts: This resource provides facts and citations about the critical issues in the Medicare for all debate.

Health Over Profit Tools for Activists: This includes tools to educate people and take action, descriptions of the current bills, how to influence business leaders, conservatives, the public and more.

45 comments for “A Year Closer to Medicare for ‘All’”