Robert Mueller appeared to have difficulty understanding and answering questions during his day-long hearings on Wednesday but snapped to attention to make political points, says Joe Lauria.

Former Russiagate special counsel Robert Mueller’s appearance before the Democratic-controlled House Judiciary and Intelligence Committees on Wednesday was an exercise by the Democrats of trying to extract statements that would keep Russiagate alive and an attempt by the Republicans to finish off the story once and for all.

Appearing to be feigning, or actually suffering early signs of senility, the nearly 75-year old Mueller disappointed both parties and the public. He declined to answer 198 questions, according to a count by NBC News. When he did answer he was often barely intelligible and mostly stuck to what was in his final report, though he often had to fumble through pages to find passages he could not recall, eating into committee members’ five-minute time limit.

Mueller especially refused to comment on the process of his investigation, such as who he did or did not interview, what countries his investigators visited and he even dodged discussing some relevant points of law. It was an abdication of his responsibility to U.S. taxpayers who footed his roughly $30-million, 22-month probe.

But when it came to making political statements, the former FBI director suddenly rediscovered his mental acuity. He went way beyond his report to say, without prosecutorial evidence, that he agreed with the assessment of then CIA Director Mike Pompeo that WikiLeaks is a “non-state, hostile intelligence agency.”

Mueller called “illegal” WikiLeak‘s obtaining the Podesta and DNC emails, an act of journalism. In the 2016 election, the Espionage Act would not apply as the DNC and Podesta emails were not classified. Nor has WikiLeaks been accused by anyone of stealing the emails. And yet the foremost law enforcement figure in the U.S. accused WikiLeaks of breaking the law merely for publishing.

Though Mueller’s report makes no mention of The Guardian’s tale that former Trump campaign manager Paul Manafort visited WikiLeaks publisher Julian Assange in the Ecuadorian embassy, when questioned on this, Mueller refused to refute the story, for which there isn’t a scrap of evidence. That was another purely political and not legal intervention from the lawman. 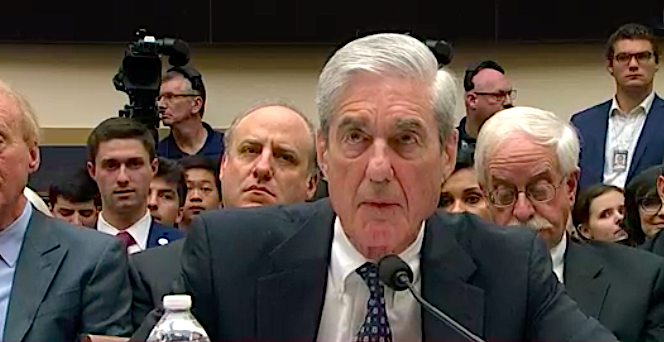 Mueller: Came to when he wanted to make a political point. (C-Span screenshot)

While Mueller concluded there was no evidence of a conspiracy between Russia and the Trump campaign to throw the 2016 election, he has not let up on the most politicized part of his message: that Russia interfered “massively” in “our democracy” and is still doing it. There was no waffling from Mueller when it came to this question.

He bases this on his indictment of 12 GRU Russian military intelligence agents whom he alleges hacked the DNC emails and transmitted them to WikiLeaks. Mueller knows those agents will never be arrested and brought to a courtroom to have his charges tested. In that sense the indictment was less a legal than a political document.

Among the inaccuracies about Russiagate that were recycled at the hearing is that the St. Petersburg-based Internet Research Agency spent $1.25 million in the United States to influence the election. That figure belonged to a unit that acted worldwide, not just in the U.S., according to Mueller’s indictment. In fact it only spent $100,000 on Facebook ads, half coming after the election, and as even Mueller pointed out, some were anti-Trump.

Cambridge Analytica, by contrast, had 5,000 data points on 240 million Americans, some of it bought from Facebook, that gave an enormous advantage for targeted ads to the Trump campaign, which says it put out 5.9 million Facebook ads based on this data. It paid at least $5.9 million to the company co-founded by Trump’s campaign strategist Steve Bannon. But we are supposed to believe that a comparatively paltry number of social media messages from the IRA threw the election. 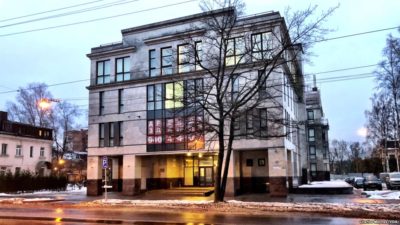 Mueller implied in his testimony that there was a link between the IRA and the Russian government despite an order from a judge for him to stop making that connection. In focusing again on Russia, no member of Congress from either party raised the content of the leaked emails.

For the Democrats especially, it is all about the source, who is irrelevant, since no one disputes the accuracy of the emails that exposed Hillary Clinton. (That the source of authentic documents is irrelevant is demonstrated by The Wall Street Journal and other major media using anonymous drop boxes pioneered by WikiLeaks.) Were a foreign power to spread disinformation about candidates in a U.S. election (something the candidates do to each other all the time) that would be sabotage. But the leaking and publication of the Clinton emails was information valuable to American voters. And WikiLeaks would have published Trump emails, but it never received any,  Editor-in-Chief Kristinn Hrafnsson told Consortium New‘s webcast CN Live!

No Power to Exonerate

With “collusion” off the table, the Democrats have been obsessed with Trump allegedly obstructing an investigation that found no underlying crime. That’s something like being arrested for resisting arrest when you’ve committed no other infraction.

In his morning testimony, Mueller amplified the misperception that the only reason he didn’t charge Trump with obstruction is because of a Justice Department Office of Legal Counsel policy that a sitting president can’t be indicted.

Instead of leaving it at that, Mueller said in his report and testimony that Trump was not “exonerated” of an obstruction charge. That led to blaring headlines Wednesday morning while the hearing was still going on. “Trump was not exonerated by my report, Robert Mueller tells Congress,” said the BBC. “Mueller Report Did Not Exonerate Trump, Mueller Says,” blared the HuffPost.

But in what may have been the most embarrassing moment for Mueller, Republican Congressman Michael Turner (R-OH) pointed out that a prosecutor does not have the power to exonerate anyone. A prosecutor  prosecutes. 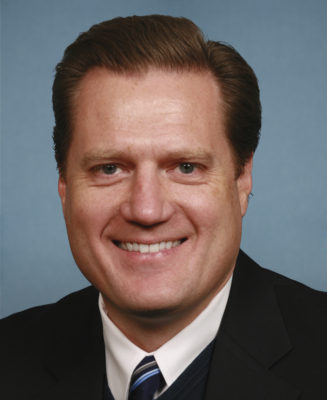 “I’m going to pass on that,” Mueller replied.

Turner said: “The statement about exoneration is misleading, and it’s meaningless. It colors this investigation— one word of out the entire portion of your report. And it’s a meaningless word that has no legal meaning, and it has colored your entire report.”

Who is a Spy for Whom?

Mueller also took a pass every time the Steele dossier was raised, which it first was by Rep. David Nunes (R-CA):

“Despite acknowledging dossier allegations as being salacious and unverified, former FBI Director James Comey briefed those allegations to President Obama and President-elect Trump. Those briefings conveniently leaked to the press, resulting in the publication of the dossier and launching thousands of false press stories based on the word of a foreign ex-spy, one who admitted he was desperate that Trump lose the election and who was eventually fired as an FBI source for leaking to the press.

“And the entire investigation was open based not on Five Eyes intelligence, but on a tip from a foreign politician about a conversation involving Joseph Mifsud. He’s a Maltese diplomat who’s widely portrayed as a Russian agent, but seems to have for more connections with Western governments, including our own FBI and our own State Department, than with Russia.”

Mueller admitted that though Mifsud lied to the FBI he never charged him as he had others. When Nunes pointed out to Mueller that Konstantin Kilimnik, a Manafort business associate, whom Mueller’s report identifies as having ties to Russian intelligence, was actually a U.S. State Department asset, Mueller refused to comment saying he was “loath” to get into it.

This Schiff Has Sailed

The chairman of the Intelligence Committee, Adam Schiff (D-CA) used the word “lies” 19 times in his opening statement, which contained at least that many.

The central one was this:

“Your investigation determined that the Trump campaign, including Donald Trump himself, knew that a foreign power was intervening in our election and welcomed it, built Russian meddling into their strategy and used it.

Disloyalty to country. Those are strong words, but how else are we to describe a presidential campaign which did not inform the authorities of a foreign offer of dirt on their opponent, which did not publicly shun it or turn it away, but which instead invited it, encouraged it and made full use of it?”

Schiff reluctantly admitted that no Trump conspiracy with Russia was uncovered, but said the “crime” of disloyalty was even worse.

“Disloyalty to country violates the very oath of citizenship, our devotion to a core principle on which our nation was founded that we, the people and not some foreign power that wishes us ill, we decide who governs us,” said Schiff.

It was pure fantasy.

Mueller should have taken a pass on that one too.

← The Great Reckoning
PEPE ESCOBAR: US and Iran Stuck on Negotiation Ground Zero →

144 comments for “Democrats Blowing on Embers With a Politicized Mueller”