On the third anniversary of the release by WikiLeaks of the DNC emails, Ray McGovern looks back at how the DNC diverted the damaging contents into a trumped up conspiracy blaming Russia with no evidence at all.

Three years ago Monday WikiLeaks published a trove of highly embarrassing emails that had been leaked from inside the Democratic National Committee. As has been the case with every leak revealed by WikiLeaks, the emails were authentic. These particular ones, however, could not have come at a worse time for top Democratic Party officials.

The emails made it unmistakably clear that the DNC had tipped the scales sharply against Democratic insurgent Bernie Sanders, giving him a snowball’s chance in hell for the nomination. The posting of the DNC emails is also widely seen as having harmed the the electoral prospects of Hillary Clinton, who could not escape responsibility completely, while a handful of the very top DNC officials were forced to immediately resign.

Relatively few Americans read the actual emails, their attention diverted to the incessant media-fostered question: Why Did the Russians Hack the DNC to Hurt Hillary? For the millions of once enthusiastic Democrats who favored Sanders, however, the disclosure that the nomination process had been fixed came as a bitter pill, leaving a sour taste in their mouths and a passive-aggressive reluctance to promote the candidacy of one they considered a usurper. Having had a huge stake in Bernie’s candidacy, they had little trouble seeing through the diversion of attention from the content of the emails.

A mere four days after the WikiLeaks release, a well orchestrated Democratic Convention nominated Clinton, while many Sanders supporters loudly objected. Thus, she began her campaign under a cloud, and as more and more Americans learned of the fraud that oozed through the DNC email correspondence — including the rigging of the Democratic primaries — the cloud grew larger and darker.

On June 12, 2016, six weeks before the convention, WikiLeaks publisher Julian Assange had announced in an interview on British TV, “We have upcoming leaks in relation to Hillary Clinton … We have emails pending publication.”

Independent forensic investigations demonstrated two years ago that the DNC emails were not hacked over the Internet, but had been copied onto an external storage device — probably a thumb drive. Additional work over recent months has yielded more evidence that the intrusion into the DNC computers was a copy, not a hack, and that it took place on May 23 and 25, 2016.

The DNC almost certainly knew what had happened — not only that someone with physical access to DNC computers had copied thousands of emails, but also which ones they had copied, and thus how prejudicial to the Clinton campaign they would be when they saw the light of day.

And so, candidate Clinton, the DNC, and the mainstream media (forever quoting anonymous “current and former intelligence officials”) appear to have colluded, deciding the best defense would be a good offense. No one knew how soon WikiLeaks would publish the emails, but the DNC offense/defense would surely have to be put in place before the convention scheduled to begin on July 25. That meant there were, at most, six weeks to react.  On July 24, about 48 hours after the leaks were published, and a day before the convention, the DNC first blamed Russia for hacking their emails and giving them to WikiLeaks to sabotage Clinton. 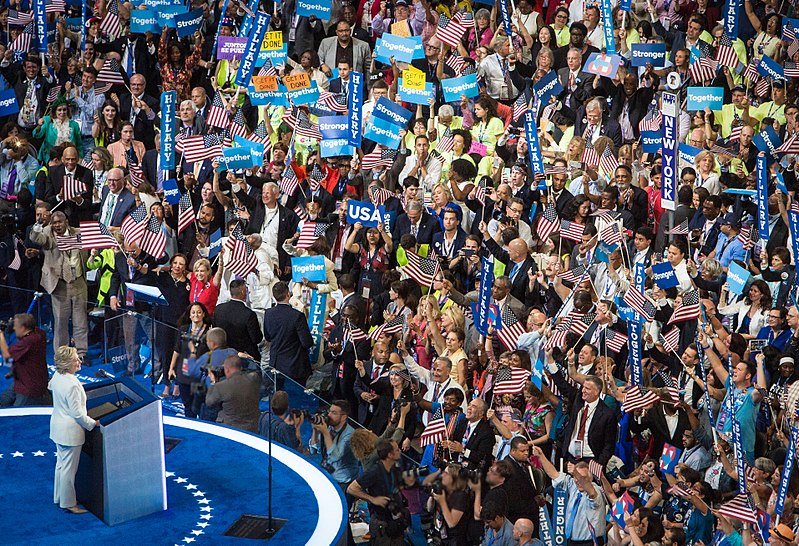 Granted, it was a stretch — and the DNC would have to hire a pliable cybersecurity firm to back up their claim. But they had good reason to believe that CrowdStrike would perform that service. It was the best Clinton campaign manager Robbie Mook and associates could apparently come up with. If they hurried, there would be just enough time to prepare a PR campaign before the convention and, best of all, there was little doubt that the media could be counted on to support the effort full bore.

When WikiLeaks published the emails on July 22, 2016, just three days before the Democratic convention, the propagandists were ready to deflect attention from the damning content of the DNC emails by repeating incessantly that the Russians hacked the emails and gave them to WikiLeaks to hurt Clinton.

It pretty much worked like a charm. The late Senator John McCain and others were quick to call the Russian “hack” an “an act of war.” Evidence? None. For icing on the cake, then-FBI Director James Comey decided not to seize and inspect the DNC computers. Nor, as we now know, did Comey even require a final report from CrowdStrike.

Eight months after the convention, in remarks at the Clinton/Podesta Center for American Progress on April 6, 2017, Clinton’s PR director, Jennifer Palmieri, could scarcely contain her pride that, after a difficult start, she was ultimately successful in keeping the Russian bear front and center.

Transcribed below (verbatim) are some of Palmieri’s more telling remarks when asked to comment, from her insider perspective, on “what was actually going on in late summer/early fall.”

“…I did appreciate that for the press to absorb … the idea that behind the stage that the Trump campaign was coordinating with Russia to defeat Hillary Clinton was too fantastic for people to, um, for the press to process, to absorb…. But then we go back to Brooklyn and heard from the — mostly our sources were other intelligence, with the press who work in the intelligence sphere, and that’s where we heard things and that’s where we learned about the dossier and the other story lines that were swirling about … And along the way the administration started confirming various pieces of what they were concerned about what Russia was doing. … [Emphasis added.]

“And we did finally get to the point on October 7, when the administration came out with a very stunning [memorandum]. How stunning it was for both the Director of National Intelligence and the Director of Homeland Security to put out a statement – a long statement – that said with high confidence that Russia was interfering in the election and they were also directing the timing of the leaks. And it named the institutions – WikiLeaks, DC Leaks, and Guccifer – as being Russian-led, and how stunning that was to be that certain and that public. … So I do think that the answer for the Democrats now … in both the House and the Senate is to talk about it more and make it more real ….”

And so, the Magnificent Diversion worked as intended. 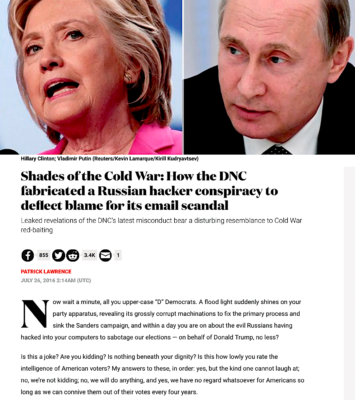 But not all journalists fell for it. Patrick Lawrence (once of The Nation, now of Consortium News) was onto the ruse from the start. He says he had “fire in the belly” on the morning of July 25, 2016, the day the Democratic convention began, and that he dashed off an article “in one long, furious exhale” within 12 hours of when the media started really pushing the “the Russians-did-it” narrative. The title of his article, pointed out to me a few months ago by VIPS member Todd Pierce, was “How the DNC fabricated a Russian hacker conspiracy to deflect blame for its email scandal … a disturbing resemblance to Cold War red-baiting.”

Lawrence’s off-the-cuff ruminations, which Salon published the next day are extraordinarily prescient and worth reading in full. He instinctively recognized the email disclosure-cum-media-obfuscation campaign as a liminal event. Here are some excerpts, reprinted here with Lawrence’s permission:

”Now wait a minute, all you upper-case “D” Democrats. A flood light suddenly shines on your party apparatus, revealing its grossly corrupt machinations to fix the primary process and sink the Sanders campaign, and within a day you are on about the evil Russians having hacked into your computers to sabotage our elections … Is this how lowly you rate the intelligence of American voters? …

The Sanders people have long charged that the DNC has had its fingers on the scale … in favor of Hillary Clinton’s nomination. The prints were everywhere … Last Friday WikiLeaks published nearly 20,000 DNC email messages providing abundant proof that Sanders and his staff were right all along. The worst of these, involving senior DNC officers, proposed Nixon-esque smears having to do with everything from ineptitude within the Sanders campaign to Sanders as a Jew in name only and an atheist by conviction. …

The caker came on Sunday, when Robby Mook … appeared on ABC’s “This Week” and … CNN’s “State of the Union” to assert that the D.N.C.’s mail was hacked “by the Russians for the purpose of helping Donald Trump.” He knows this … because “experts” — experts he will never name — have told him so.

…the Clinton campaign now goes for a twofer. Watch as it advances the Russians-did-it thesis on the basis of nothing, then shoots the messenger, then associates Trump with its own mess — and, finally, gets to ignore the nature of its transgression (which any paying-attention person must consider grave). Preposterous, readers. Join me, please, in having absolutely none of it. There is no “Russian actor” at the bottom of this swamp, to put my position bluntly. You will never, ever be offered persuasive evidence otherwise. …[Emphasis added.]

Trump, to make this work, must be blamed for his willingness to negotiate with Moscow. This is now among his sins. Got that? Anyone who says he will talk to the Russians has transgressed the American code. … I am developing nitrogen bends … Which way for a breath of air?”

A year later Lawrence was commissioned by The Nation to write an investigative report on the so-called “Russian hack.” On August 9, 2017, after he interviewed several Veteran Intelligence Professionals for Sanity, among others, The Nation published his findings in an article entitled “A New Report Raises Big Questions About Last Year’s DNC Hack.” Lawrence wrote, “Former NSA experts, now members of Veteran Intelligence Professionals for Sanity (VIPS), say it wasn’t a hack at all, but a leak—an inside job by someone with access to the DNC’s system.”

Again, Lawrence got it right — this time relying less on his own experience and intuition than on applied science as practiced by real technical experts with no axes to grind. But, sadly, that cut across the grain of the acceptable Russia-gate narrative, and a furor erupted among Hillary followers still licking their wounds over her loss. It proved simply too much for them to entertain the notion that Clinton was quite capable, with help from the likes of Mook, to snatch defeat out of the jaws of victory — without any help from Vladimir Putin.

Ray McGovern works with Tell the Word, a publishing arm of the ecumenical Church of the Saviour in inner-city Washington. An ex-CIA analyst, his expertise on Russia goes back a half-century. He prepared and briefed The President’s Daily Brieffor Presidents Nixon, Ford, and Reagan, and in retirement he co-founded Veteran Intelligence Professionals for Sanity (VIPS).

106 comments for “RAY McGOVERN: A Non-Hack That Raised Hillary’s Hackles”