Edward Curtin contemplates the longstanding and savage complicity between church and state. 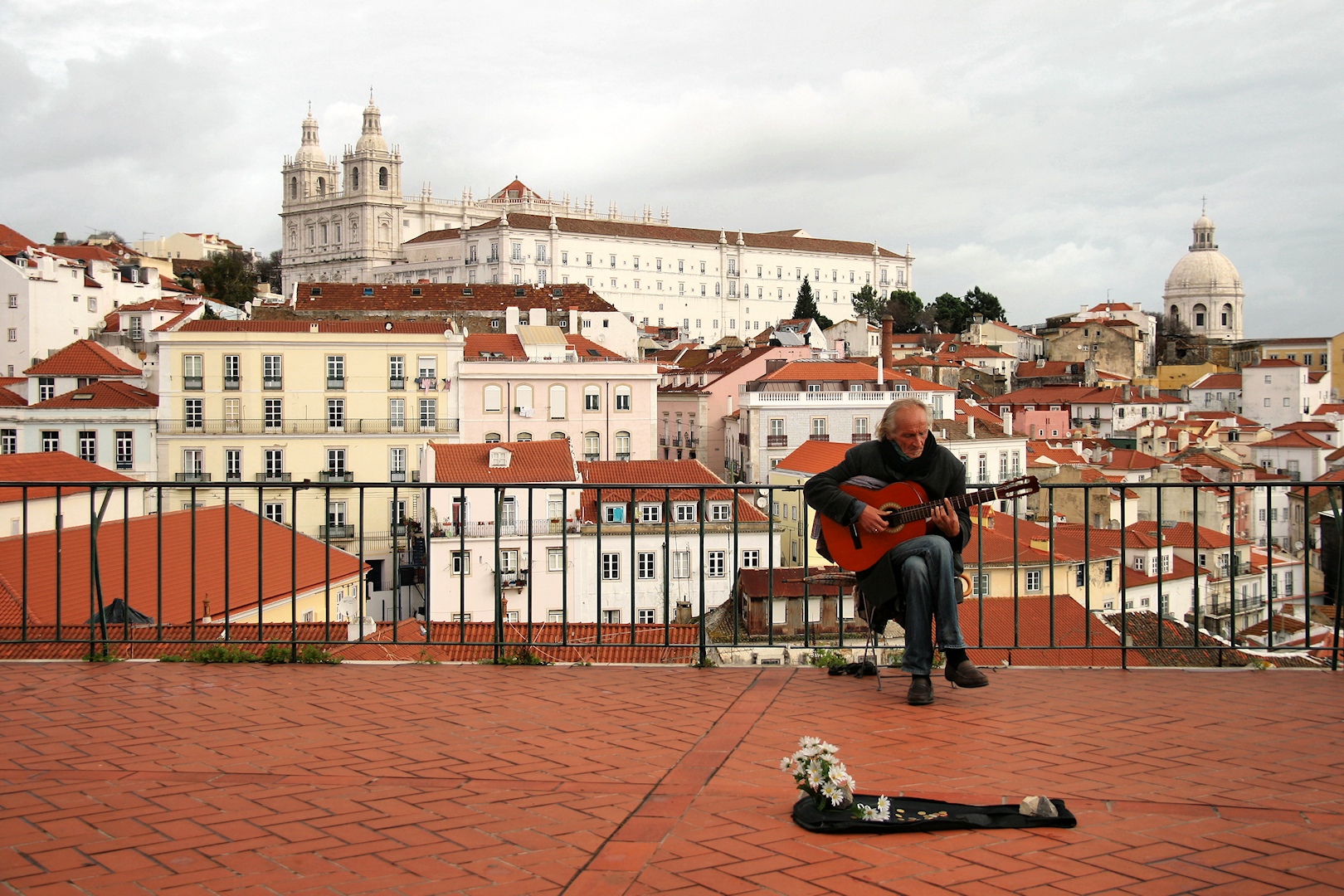 By Edward Curtin
in Lisbon
edwardcurtin.com

As I sit on the small balcony on the top floor of an old house in the working-class neighborhood of Alfama in Lisbon, Portugal, it is early evening, the time for wine and voices wafting on the fragrant breeze through the twisting cobble-stoned streets. The National Pantheon (Panteao Nacional) stares me in the face.  I stare back, and then look up to the heavens and to the cross that is silhouetted against the blue sky.  It crowns the Pantheon’s massive dome.  On its façade stand three statues, only one of which I can see clearly.  She is Santa Engracia, a Christian martyr from before the period when the Roman Emperor Constantine legalized and legitimatized Christianity, transforming the cross into a sword. It was her church before the state found it acceptable to convert it into a space to glorify its secular saints and its military and political prowess.

Rome never dies, although it falls in different guises but is resurrected by the human urge to dominate others.  The savage complicity between church and state perdures through the ages.

Wherever you go, the monuments and statues glorifying humanity’s violent history are always presented as a form of liberation. Tourist attractions. Generals, princes, and kings atop horses, brandishing swords and guns, “grace” squares and monuments as a reminder to the common folk of who is looking down on them and to whom they should look up, or look out.  Yet even when they do show obeisance to their “masters” who rule them from the heights, the commoners are left out of the spoils of empire, and if they object, they are taken out without hesitation.

On a clothesline outside the windows of the house across the street where a woman peeks out, the pants and underwear humbly sway to a different tune, a sad Fado moan that seems to ask: What has happened?  Has it always been like this?

I am tempted to tell the underwear it has but realize its job is to cover-up, not expose the truth. 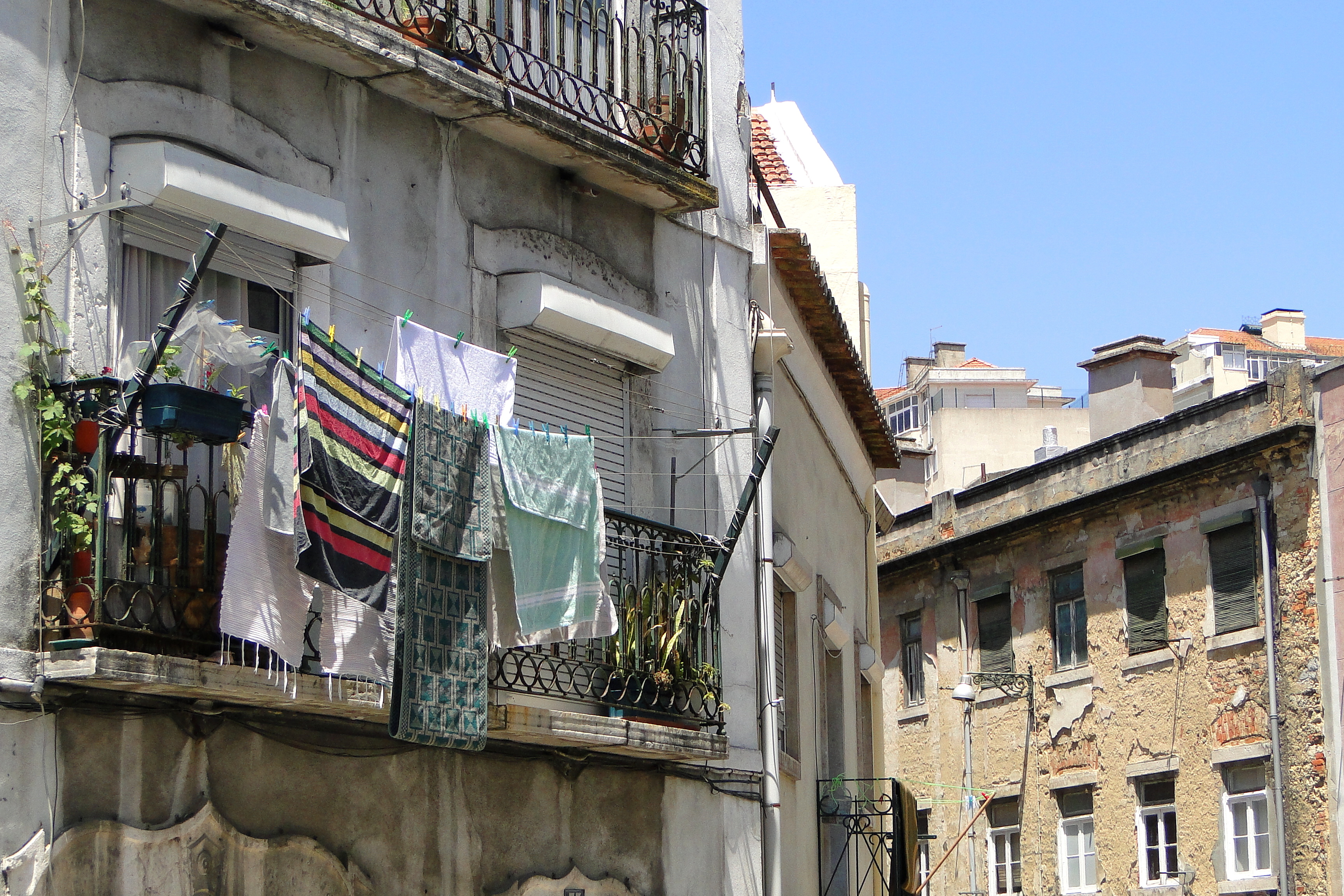 Rainer Maria Rilke, the German language poet of most delicate sensibilities, asked from one of his castle abodes provided by one of his many rich lady friends:

“Who, if I cried out, would hear me

Among the angels’ hierarchies?

And even if one of them

Pressed me against his heart

I would be consumed in that

But down below, the omnipresent graffiti on the walls is a bit less circumspect.  It shouts: “Fuck the elites!” (Translation provided.)

The old poor murmur their prayers and the angry young spray their rage on every canvas they can find. Both seek hope outside the museums and mausoleums erected by the wealthy to glorify themselves.

And fate answers: It’s the same old story, a fight for love and glory.  Those seeking glory, the rich elites, the powerful with the guns in all the countries across the planet, with a few exceptions, smash the lovers and the humble people as they struggle to keep faith and hope alive. Who will liberate them?

Who among the elites will hold the arm of the old Portuguese woman on the one crutch as she teeters on her struggle up the steep hill to the little grocery store?  “Orbrigada – Deus te abinçoe” (Thank you, God bless you) is her response to a stranger, whose heart aches.

Here in Lisbon there is a famous tourist attraction, Castelo De S. Jorge, a massive hilltop castle and fortress overlooking the city.  Built by the Moors in the 11th century, it was conquered by Dom Afonso Henriques, who became the first king of Portugal, and began what is so nobly described as “its golden age as a home for the royalty.”  Royals are always noble, and castles and mythic saint/soldiers like St. George intimate friends.  It is a marriage made in hell.

The Spaniard, Ignatius of Loyola, was a soldier seriously wounded in war at the age of 30.  He subsequently underwent a religious conversion. He founded the Jesuit order 18 years later and was sainted in 1556, 66 years after his death. Having been educated by the Jesuits, I vividly recall the motto of my Jesuit high school that adorns the school seal, “Deo et Patriae,”a not so subtle reminder of how my priorities should be linked.  I have failed that test, just as I failed a freshman mathematics exam, probably because I couldn’t figure out what two plus two equaled, since I was reading Fyodor Dostoevsky’s “Notes from Underground” at the time and might have thought it was five because I believed I was free and not what Ignatius urged Jesuits to be – “as if a dead body” in obedience to the Pope.

The so-called rational ones have brought the Earth to the point of extinction with their instrumental rationality and their diseased souls.  We are living in the Crystal Palace that Dostoevsky so mocked long before the crystal turned digital. One plus zero may equal one in such a glass house, but such counting will not protect us from the whirlwind we have conjured from the smart man’s equation of E=mc2

Only a spiritual equivalent will save us, as James Douglass has so eloquently argued in his slim but powerful book, “Lightning East to West: Jesus, Gandhi, and the Nuclear Age,” where, taking up Gandhi’s suggestion, he argues that there is a spiritual equivalent to Einstein’s law of physical change that we must discover that will allow for a radical transformation of society and the world. Douglass’s country is the world.

I, however, am reminded of a very different Jesuit-trained American (one among many), who has passed the American indoctrination exam “admirably” and who has worked assiduously for God and country and followed that American motto of “In God We Trust” when  he recently led the CIA in its holy wars under President Barack Obama, the Nobel Peace Prize winner – John Brennan. Was his excuse he was just following orders, “as if a dead body”?

I think the dead children in Afghanistan, Libya, Syria, Yemen and so many other places he helped to destroy would not buy that excuse. Yet Fordham University thought to honor him. Is this what the Jesuit motto means: “Ad maiorem Dei gloriam inque hominum salute” (for the greater glory of God and the salvation of humanity)?

Has Fordham ever heard of the Nuremberg Trials?

In the men’s room of St. George’s Castle, there is a wall dispenser selling M&Ms.  Imperialism and colonialism take many forms.

It is hard to say what’s new since humanity’s savage history just rolls along.  The technology changes, but people do not. Spray paint is about 75 years old, about the same age as nuclear weapons, both products of World War II. One leads to “Fuck the elites,” while the other says, “We are the elites and see what we can do to the Japanese.”

War spurs technological development like nothing else, and as the brilliant French social thinker Paul Virilio has shown with his war model, “history progresses at the speed of its weapons systems.” Modern societies, with increased technological speed, the administration of fear (terror), and digital gadgetry, are engaged in a battle for people’s minds through technological perception management. Virilio makes it clear, following on the work of his fellow countryman Jacques Ellul, that built into the technology is the “integral accident,” by which he means that every new technology creates its own potential “accident.”

While most people welcome new technology because they have been conditioned to think only in scientific and positivistic terms, they fail to see the price to be paid.  The nuclear bomb, nicknamed “The Gadget” by its one-dimensional, sick scientific inventors, is an accident waiting to happen, unless human madness first leads to its intended use once again.

Or unless we can first discover the spiritual power to eliminate what we have created.

Now we have what Virilio calls the “information bomb,” the glut of information that overloads people’s ability to think clearly or to concentrate, but a boom to the elites who think they are in full control of people’s minds and the technology they promote.

On the ramparts of Castelo De S. Jorge, the tourists snap photo after photo with their cell phones, failing to realize that these memories they are “shooting” from the heights where canons once shot the infidels, have imprisoned them in a dungeon as deep and dark as the one in the castle below their feet.

Visiting castles, like so many trips into the past, can awaken one to the truth of human history or put one to sleep.  It is usually the latter.

The Spanish philosopher Ortega y Gassett, who lived here in Lisbon for a year after fleeing Franco’s Spain, said it best: “The only genuine ideas are the ideas of the shipwrecked. All the rest is rhetoric, farce.”

We are all shipwrecked now, not just the Portuguese sailors long lost at sea never to return to home despite the lament of the Fado singers.

If we are to make this Earth our home again, we had better learn to sing a different tune.  If not, we will be eliminated by accident or intent, and no one will be singing for our return.  It is a harsh truth, but quite simple.

In the Foz district of Porto, Portugal on the Atlantic, in the park and on the beaches, children play and laugh and the music of their voices rises into the air to remind me that they are our hope on this dark and tempestuous sea on which we are shipwrecked, hoping to find our way home.

Dostoevsky said it well: “The soul is healed by being with children.”

Can we hear their voices, singing?

11 comments for “When Warriors Become Saints”