The aerial parade of military aircraft was a chilling display of rampant killing machinery, write Medea Benjamin and Ann Wright.

President Donald Trump’s order to the Pentagon to have an aerial parade of military aircraft over Washington, D.C., on July 4 provided a history lesson of America’s war mongering in the past two decades, and a terrifying view of what might appear in the skies of Iran if National Security Advisor John Bolton gets his way.

The combat aircraft that were cheered by Trump’s supporters as they flew low over the monuments in the nation’s capital have not been cheered by people in Afghanistan, Iraq, Pakistan, Libya, Syria, Yemen and Palestine as the same type of planes fly over their homes — terrifying and killing their children and wreaking havoc on their lives. 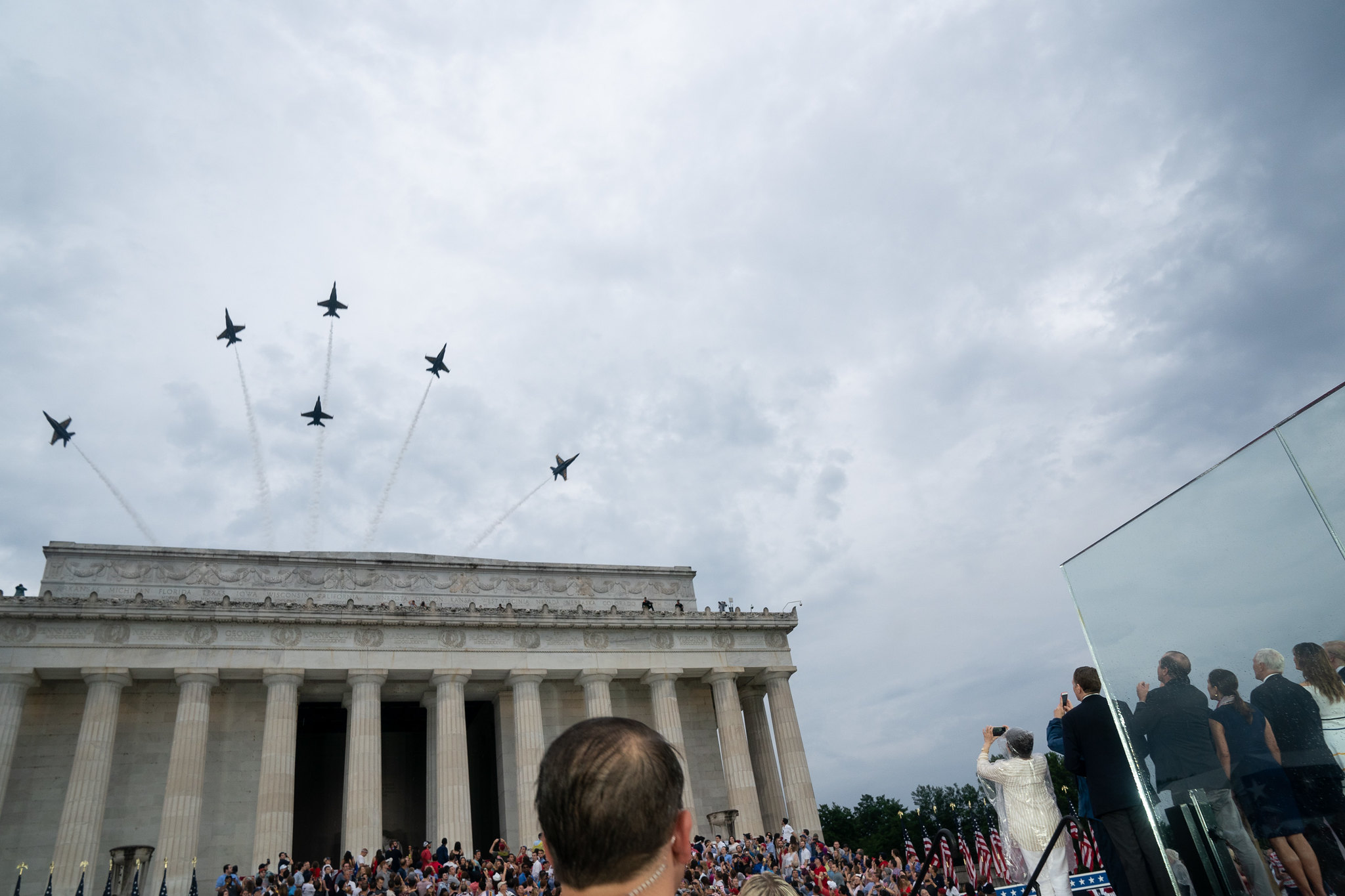 Military aircraft fly above the Lincoln Memorial in D.C. during Trump’s “Salute to America” on July 4, 2019. (White House/D. Myles Cullen)

Over those countries, Air Force B-2 Spirit, Air Force F-22 Raptor,  Navy F-35C Joint Strike Fighter and F/A-18 Hornet stealth fighters and bombers fly so high they are not seen or heard — until the massive explosions from their 500- to 2,000-pound bombs hit and obliterate everything and everyone in their radius. The blast radius of a 2,000-pound bomb is 82 feet, but the lethal fragmentation reaches 1,200 feet. In 2017, the Trump administration dropped the most massive non-nuclear bomb in its inventory, the 21,000 pound “mother of all bombs,” on a cave tunnel complex in Afghanistan.

While most Americans have probably forgotten we are still at war in Afghanistan, the Trump administration “eased” the rules of engagement, allowing the military to drop more bombs in 2018 than in any other year since the war began in 2001.  The 7,632 bombs dropped by American aircraft in 2018 made U.S. weapons makers rich, but hit 1,015 Afghan civilians.

The Boeing-made combat attack Apache helicopters, a crowd pleaser on July 4, have been used by the US Army to blow up homes and cars filled with civilians in Afghanistan and Iraq. The Israeli military uses them to kill Palestinian civilians in Gaza and the Saudi military has killed children in Yemen with these death machines.

Billions of dollars worth of U.S. planes and bombs sold to Saudi Arabia raked in record profits for weapons manufacturers such as Raytheon and Lockheed Martin. But they pummeled Yemeni civilians since the air war started in 2015, killing people in marketplaces, weddings, funerals, and 40 children on a summer outing in a school bus. Radhya al-Mutawakel, chairwoman of the Yemeni human rights organization Mwatana, says the U.S. has legal and moral responsibility for selling weapons to the Saudi-led coalition. “Yemeni civilians are dying every day because of this war and you (America) are fueling this war. It is a shame that financial interests are worth more than the blood of innocent people.”

One notorious vehicle of death that was not flown above Washington was America’s assassin drone.  Perhaps it was too dangerous for an unmanned aerial vehicle (UAV) to be flown close to the president of the United States and a crowd of American citizens with its history of numerous inexplicable crashes and intelligence failures that have caused the deaths of hundreds of innocent civilians in Afghanistan, Pakistan, Yemen and Iraq.

B-2 Spirit bomber is prepared for a training mission at Joint Base Pearl Harbor-Hickam, Hawaii, Jan. 17, 2019. (Air Force/Thomas Barley)

John Bolton, who has the ear of the president every day, wrote in an op-ed in 2015 that in order to stop Iran from getting a nuclear weapon, the U.S. should bomb Iran. Now that he has goaded Iran into stepping up its enrichment of uranium as a result of the U.S. reneging on the nuclear deal and European signatories bailing out on their responsibilities in the agreement, Bolton is itching to start the bombing. So are Israeli Prime Minister Benjamin Netanyahu and Mohammad Bin Salman, crown prince of Saudi Arabia. Both Israel and Saudi Arabia have been trying for years to drag the U.S. into a war with Iran. Colleagues in the humanitarian and refugee arenas in the Middle East tell us a war is coming and are preparing for its nightmarish consequences throughout the region.

With the U.S. political and media dogs of war howling again for blood in Iran, Trump’s decision to showcase America’s aerial firepower must have been cheered by the war hawks in the administration and Congress, and their friends in the weapons industry. But to those of us who want peaceful resolutions to international disputes, the Fourth of July display was a chilling reminder of the horrific deaths caused by successive Administrations’ propensity for war and the terror that might soon be raining down on the people of Iran if John Bolton gets his way.

Medea Benjamin is the co-founder of CODEPINK: Women for Peace and the author of numerous books including “Inside Iran,”  “Kingdom of the Unjust: Saudia Arabia” and “Killing by Remote Control-Drones.”

Ann Wright is a retired U.S. Army Colonel and a former U.S. diplomat who resigned in 2003 in opposition to Bush’s war on Iraq. She is the co-author of “Dissent: Voices of Conscience.”