‘A Relentless and Unrestrained Campaign of
Public Mobbing, Intimidation and Defamation’

Warns of ‘Criminalization of Journalism’

The UN special rapporteur on torture has issued a stinging rebuke to the United States, Great Britain, Sweden and Ecuador for “deliberately” exposing WikiLeaks founder Julian Assange to years of “cruel, inhuman or degrading treatment or punishment,” which can only be described as “psychological torture.”

“In 20 years of work with victims of war, violence and political persecution I have never seen a group of democratic States ganging up to deliberately isolate, demonise and abuse a single individual for such a long time and with so little regard for human dignity and the rule of law,” Nils Melzer said in a statement published on the UN High Commissioner for Human Right’s website on Friday. “The collective persecution of Julian Assange must end here and now!”

“The evidence is overwhelming and clear,” Melzer  said. “Mr. Assange has been deliberately exposed, for a period of several years, to progressively severe forms of cruel, inhuman or degrading treatment or punishment, the cumulative effects of which can only be described as psychological torture.”

“In the course of the past nine years, Mr. Assange has been exposed to persistent, progressively severe abuse ranging from systematic judicial persecution and arbitrary confinement in the Ecuadorian embassy, to his oppressive isolation, harassment and surveillance inside the embassy, and from deliberate collective ridicule, insults and humiliation, to open instigation of violence and even repeated calls for his assassination.”

Melzer visited Assange at Belmarsh prison in London on May 9 with two doctors, expert in recognizing potential torture victims, who examined the WikiLeaks founder. Melzer’s statement makes no mention of Assange having been hospitalized in the prison after he was unable to converse with his Swedish lawyer.

“It was obvious that Mr. Assange’s health has been seriously affected by the extremely hostile and arbitrary environment he has been exposed to for many years. Most importantly, in addition to physical ailments, Mr. Assange showed all symptoms typical for prolonged exposure to psychological torture, including extreme stress, chronic anxiety and intense psychological trauma.”

The UN rapporteur said Assange’s human rights could be further threatened with extradition to the United States to face 18 charges, including 17 under the Espionage Act.

“My most urgent concern is that, in the United States, Mr. Assange would be exposed to a real risk of serious violations of his human rights, including his freedom of expression, his right to a fair trial and the prohibition of torture and other cruel, inhuman or degrading treatment or punishment,” said Melzer.

He said he was “particularly alarmed” by the Espionage Act charges. “This may well result in a life sentence without parole, or possibly even the death penalty, if further charges were to be added in the future,” said Melzer.

The rapporteur expressed deep concern that the Trump administration is criminalizing journalism.

“Since 2010, when Wikileaks started publishing evidence of war crimes and torture committed by US forces, we have seen a sustained and concerted effort by several States towards getting Mr. Assange extradited to the United States for prosecution, raising serious concern over the criminalisation of investigative journalism in violation of both the US Constitution and international human rights law,” the rapporteur said.

The Sydney Morning Herald, quoting from the confidential report that Melzer sent to the British government on Monday as well as from an interview with the rapporteur, reported :

“[Assange] is really something I’ve never seen in 20 years,” Melzer said. “I’ve seen atrocities in war areas that were physically more horrible but I’ve never seen a single person pursued so relentlessly and with so little foundation.

“[When I saw him] I immediately compared him to some of the graver cases in interrogation prisons in terms of his psychological reaction patterns. That’s what alarmed me so much.” He said Assange’s treatment was “very close to the intentional, purposeful infliction of coercive measures to try to break him”.

He appeared “extremely agitated and preoccupied,” Melzer said. “He asked a lot of questions and he would jump around, he was so preoccupied with everything he can’t even compute my answers any more.

“There were episodes of this, then he was part of the conversation as normal, then again he would enter into this agitated state. I have seen with other victims of psychological torture that would happen.”

Melzer also blasted the government of Assange’s native Australia. He told the newspaper, “Australia is a glaring absence in this case. They’re just not around, as if Assange was not an Australian citizen. That is not the correct way of dealing with that.”

A spokesperson for the Australian Department of Foreign Affairs and Trade told the Herald: “We reject any suggestion by the UN Special Rapporteur on Torture that the Australian Government is complicit in psychological torture or has shown a lack of consular support for Mr Assange.”

Britain’s foreign secretary, Jeremy Hunt, condemned Melzer for his report. Hunt said it was “wrong” for the UN rapporteur to interfere with British justice by uttering “inflammatory accusations.”

This is wrong. Assange chose to hide in the embassy and was always free to leave and face justice. The UN Special Rapporteur should allow British courts to make their judgements without his interference or inflammatory accusations. https://t.co/s0UtMN5pU0 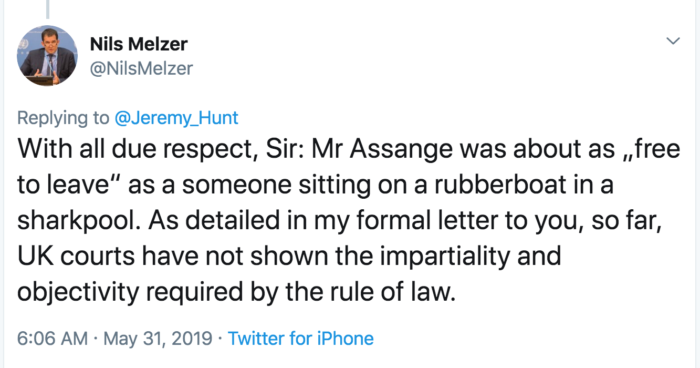