WikiLeaks on Wednesday said it was gravely concerned for the health of its publisher, Julian Assange, and questioned Britain’s “standing as a human-rights abiding nation.”

WikiLeaks has condemned Britain for its treatment of Julian Assange, expressing “grave concerns” for the health of its publisher who has been transferred to the health ward of Belmarsh prison in London.

In a statement released on Twitter on Wednesday, the publication also condemned Ecuador for having created conditions “incompatible with basic human rights” for Assange, who had been granted asylum in its London embassy and remained there for seven years. He was cutoff the last year from the internet with only minimal visits permitted.

Assange is serving a 50-week sentence in the maximum-security prison for skipping bail in 2012 when he was wanted for questioning by Sweden on sexual assault allegations. That year he entered Ecuador’s embassy and remained there until British police were invited in to arrest Assange on April 11.

Britain had twice ignored rulings by the United Nations working group on arbitrary detention that the UK should let Assange free and pay him compensation. “The UK’s refusal to abide by UN rulings, and its subsequent treatment of Mr. Assange since his arrest, presents serious questions about the UK’s standing as a human rights-abiding nation,” WikiLeaks said in its statement.

Assange has been kept in isolation for 23 hours a day at Belmarsh, and has been allowed only a handful of visits from his lawyers. The UN’s special rapporteur for torture visited him with a doctor, who examined Assange, earlier this month. The rapporteur’s report has not yet been released.

“During the seven weeks in Belmarsh his health has continued to deteriorate and he has dramatically lost weight,” WikiLeaks said.

News that Assange’s health had declined to the point that he had to be transferred to the prison hospital was first reported by the Swedish daily  Upsala Nya Tidning, which quoted Assange’s Swedish lawyer, Per Samuelson, saying that his client was so ill that “a normal conversation with him was not possible.”

Samuelson had requested therefor that Swedish authorities postpone a June 3 hearing on a renewed Swedish extradition request to the UK on the sexual assault allegations, a request that was denied.

“We strongly condemn the refusal by the Swedish court to postpone a hearing on 3rd June on the basis of Mr. Assange’s health condition,” WikiLeaks said.

Here is the full statement from WikiLeaks. 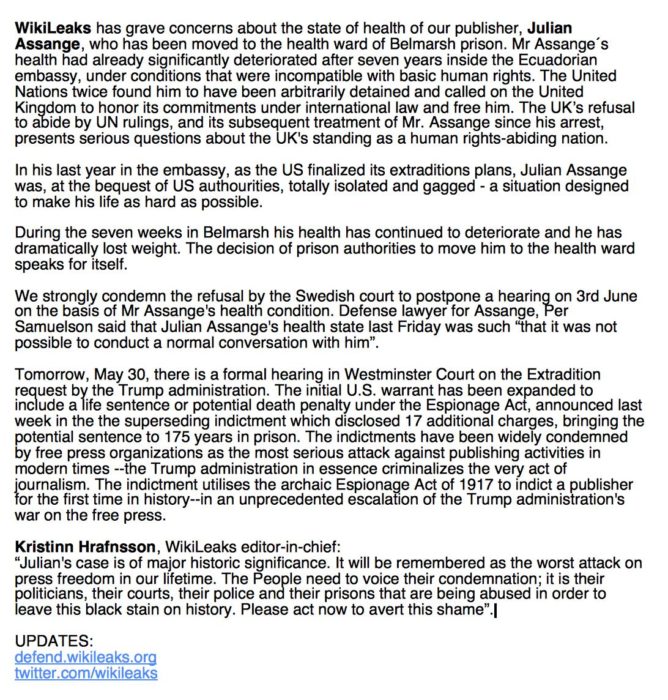