The leak undermines the fundamental assumptions behind many years of Western reporting, writes Caitlin Johnstone.

The Organization for the Prohibition of Chemical Weapons (OPCW) has begun responding to queries by the press about a leaked document that contradicts official OPCW findings on an alleged chemical weapons attack last year in Douma, Syria. The prepared statement they’ve been using in response to these queries confirms the authenticity of the document.

To recap, a few days ago the Working Group on Syria, Propaganda and Media (WGSPM) published a document signed by a man named Ian Henderson, whose name is seen listed in expert leadership positions on OPCW documents from as far back as 1998 and as recently as 2018. It’s unknown who leaked the document and what other media organizations may have received it. 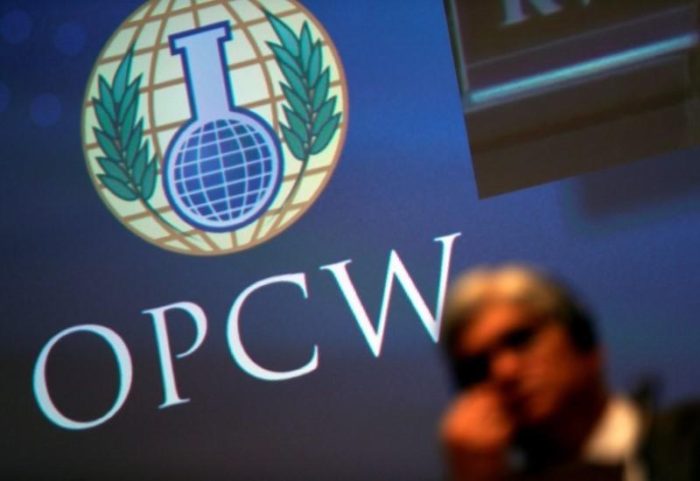 The report picks apart the extremely shaky physics and narratives of the official OPCW analysis on the gas cylinders allegedly dropped from Syrian government aircraft in the Douma attack, and concludes that “The dimensions, characteristics and appearance of the cylinders, and the surrounding scene of the incidents, were inconsistent with what would have been expected in the case of either cylinder being delivered from an aircraft,” saying instead that manual placement of the cylinders in the locations investigators found them in is “the only plausible explanation for observations at the scene.”

Cylinders Did Not Arrive by Air

To be clear, this means that according to the assessment signed by an OPCW-trained expert, the cylinders alleged to have dispensed poison gas which killed dozens of people in Douma did not arrive in the locations that they were alleged to have arrived at via aircraft dropped by the Syrian government, but via manual placement by people on the ground, where photographs were then taken and circulated around the world as evidence against the Syrian government which was used to justify air strikes by the U.S., U.K. and France. There were swift military consequences meted out on what appears now to be a lie. At the time, the people on the ground were the Al Qaeda-linked Jaysh Al-Islam, who had at that point nothing to lose and everything to gain by staging a false flag attack in a last-ditch attempt to get NATO powers to function as their air force, since they’d already effectively lost the battle against the Syrian government.

"If you still believe at this point that the Syrian government dropped poison gas on #Douma last year, then I’ve got some Iraqi WMDs to sell you."#Syriahttps://t.co/hFIbBF0J9x

We now have confirmation that, for whatever the reason may be, this assessment was hidden from the public by the OPCW.

British journalists Peter Hitchens and Brian Whitaker have both published matching statements from the OPCW on this report. Hitchens has been an outspoken critic of the establishment Syria narrative; Whittaker has been a virulent promulgator of it. The statement begins as a very mundane and obvious assertion that it takes information from numerous sources and then publishes its conclusions, but concludes with an admission that it is “conducting an internal investigation about the unauthorised release of the document in question.” This constitutes an admission that the document is authentic.

Here is the text of the statement in full; the portion I’m drawing attention to is in the second-to-last paragraph:

The OPCW establishes facts surrounding allegations of the use of toxic chemicals for hostile purposes in the Syrian Arab Republic through the Fact-Finding Mission (FFM), which was set up in 2014.

The OPCW Technical Secretariat reaffirms that the FFM complies with established methodologies and practices to ensure the integrity of its findings. The FFM takes into account all available, relevant, and reliable information and analysis within the scope of its mandate to determine its findings.

Per standard practice, the FFM draws expertise from different divisions across the Technical Secretariat as needed. All information was taken into account, deliberated, and weighed when formulating the final report regarding the incident in Douma, Syrian Arab Republic, on 7 April 2018. On 1 March 2019, the OPCW issued its final report on this incident, signed by the Director-General.

Per OPCW rules and regulations, and in order to ensure the privacy, safety, and security of personnel, the OPCW does not provide information about individual staff members of the Technical Secretariat

Pursuant to its established policies and practices, the OPCW Technical Secretariat is conducting an internal investigation about the unauthorised release of the document in question.

At this time, there is no further public information on this matter and the OPCW is unable to accommodate requests for interviews.

Should Be Major Global News

This should be a major news headline all around the world, but of course it is not. As of this writing the mass media have remained deadly silent about the document despite its enormous relevance to an international headline story last year which occupied many days of air time. It not only debunks a major news story that had military consequences, it casts doubt on a most esteemed international independent investigative body and undermines the fundamental assumptions behind many years of Western reporting in the area. People get lazy about letting the media tell them what’s important and they assume if it’s not in the news, it’s not a big deal. This is a big deal, this is a major story and it is going unreported, which makes the media’s silence a part of the story as well.

Also conspicuously absent from discussion has been the war propaganda firm Bellingcat, which is usually the first to put the most establishment-friendly spin possible on any development in this area. If Eliot Higgins can’t even work out how to polish this turd, you know it’s a steamer.

As near as I can tell the kindest possible interpretation of these revelations is that an expert who has worked with the OPCW for decades gave an engineering assessment which directly contradicted the official findings of the OPCW on Douma, but OPCW officials didn’t find his assessment convincing for whatever reason and hid every trace of it from public view. That’s the least sinister possibility: that a sharp dissent from a distinguished expert within the OPCW’s own investigation was completely hidden from the public because the people calling the shots at the OPCW didn’t want to confuse us with a perspective they didn’t find credible. This most charitable interpretation possible is damningly unacceptable by itself, because the public should obviously be kept informed of any possible evidence which may contradict the reasons they were fed to justify an act of war by powerful governments.

And there are many far less charitable interpretations. It is not in the slightest bit unreasonable to speculate that the ostensibly independent OPCW in fact serves the interests of the U.S.-centralized power alliance, and that it suppressed the Henderson report because it pokes holes in the narratives that are used to demonize a longtime target for imperialist regime change. That is a perfectly reasonable possibility for us to wonder about, and the onus is now on the OPCW to prove to us that it is not the case.

Either way, the fact that the OPCW kept Henderson’s findings from receiving not a whisper of attention severely undermines the organization’s credibility, not just with regard to Douma but with regard to everything, including the establishment Syria narrative as a whole and the Skripal case in the UK. Everything the OPCW has ever concluded about alleged chemical usage around the world is now subject to very legitimate skepticism.

“The leaked OPCW engineers’ assessment is confirmed as genuine, which means the final report actively concealed evidence that the Douma chemical attack was staged by jihadists and the White Helmets,” tweeted British journalist Jonathan Cook. “The OPCW’s other Syria reports must now be treated as worthless too.”

In light of the new evidence from an OPCW engineers report, leaked to 'Working Group on Syria, Propaganda and Media’, previously suppressed by the OPCW themselves, about the alleged chemical in Douma…

When I first reported on the Henderson document the other day, I received a fair criticism from a Medium user that I was actually far too charitable in my reporting on just how thoroughly the official Douma narrative was rejected.

“This article doesn’t really express just how damning the report actually is,” the user said. “It’s much more than just on balance their observations are inconsistent with the cylinders being dropped from aircraft. Just about everything about the official narrative is shown to be plain impossible, from the angles of the broken rebar in the roof, through the damage to the gas cylinders, to the pile of fins on the balcony that couldn’t have been attached to the cylinder, and more. There’s simply no way they were dropped from helicopters.”

I strongly encourage readers to check out the 15-page document for themselves to understand its claims and make up their own minds, and then sit a bit to really digest the possible implications. We may have just discovered a major piece of the puzzle explaining how seemingly independent international organizations help deceive us into consenting to wars and regime change interventionism around the world.

The narrative that Syrian President Bashar al-Assad is a monster who gasses his own people has been used to justify Western interventionism in that nation which has included arming actual terrorist groups, enabling them to leave a trail of blood and chaos across Syria, as well as an illegal occupation of Syrian land and sanctions against the Syrian economy. This narrative is being used currently to maintain support for continuing to uphold the crippling sanctions that are making life hell for the average Syrian, today. This is not in the past, this is happening now, and there is no telling when these siege efforts towards regime change will be ramped up further into more overt forms of military action. The violence, displacement and economic hardship that is being inflicted upon the Syrian people by this interventionism is causing incalculably immense suffering, and it is all made possible by false narratives sold to the public.

Remember, they wouldn’t work so hard to manufacture your consent if they didn’t require that consent. So don’t give it to them. The first step to ending the suffering caused by Western interventionism is to help free public consciousness from the incredibly complex and well-oiled propaganda machine which manufactures the consent of the governed for unconscionable acts of violence and devastation. Wake people up to what’s going on so we can all cease consenting.