Colonel Ann Wright reports on the life in limbo for people along the southern border who are applying for refuge in the U.S.

The U.S.-Mexico border at the Pacific Ocean is composed of two very tall fences, with a no man’s land of about 30 feet in between. Sensors and cameras alert U.S Border Patrol guards of any activity on or between the fences.

Thousands of people hoping for asylum in the U.S. are waiting for hearings in tents, shelters and detention facilities in cities on both sides of the border.  Rev. John, a Methodist pastor, has been working for the past 25 years with immigrants and refugees both in Mexico and in the United States.  He said that each U.S. administration has tried to use fences and walls to stem the flow of newcomers.

Despite the double fence, people keep coming. Most, Rev. John said, are turning themselves into U.S. Border Patrol rather than enter illegally.  While still in Central America, many speak by phone with U.S. friends and relatives and develop leads on work and housing before they leave home.  He noted that documenting the violence that many are trying to escape — the beatings, murders, burning of businesses and homes — is much easier now that cellphone cameras are prevalent. This can be used as evidence in asylum hearings. 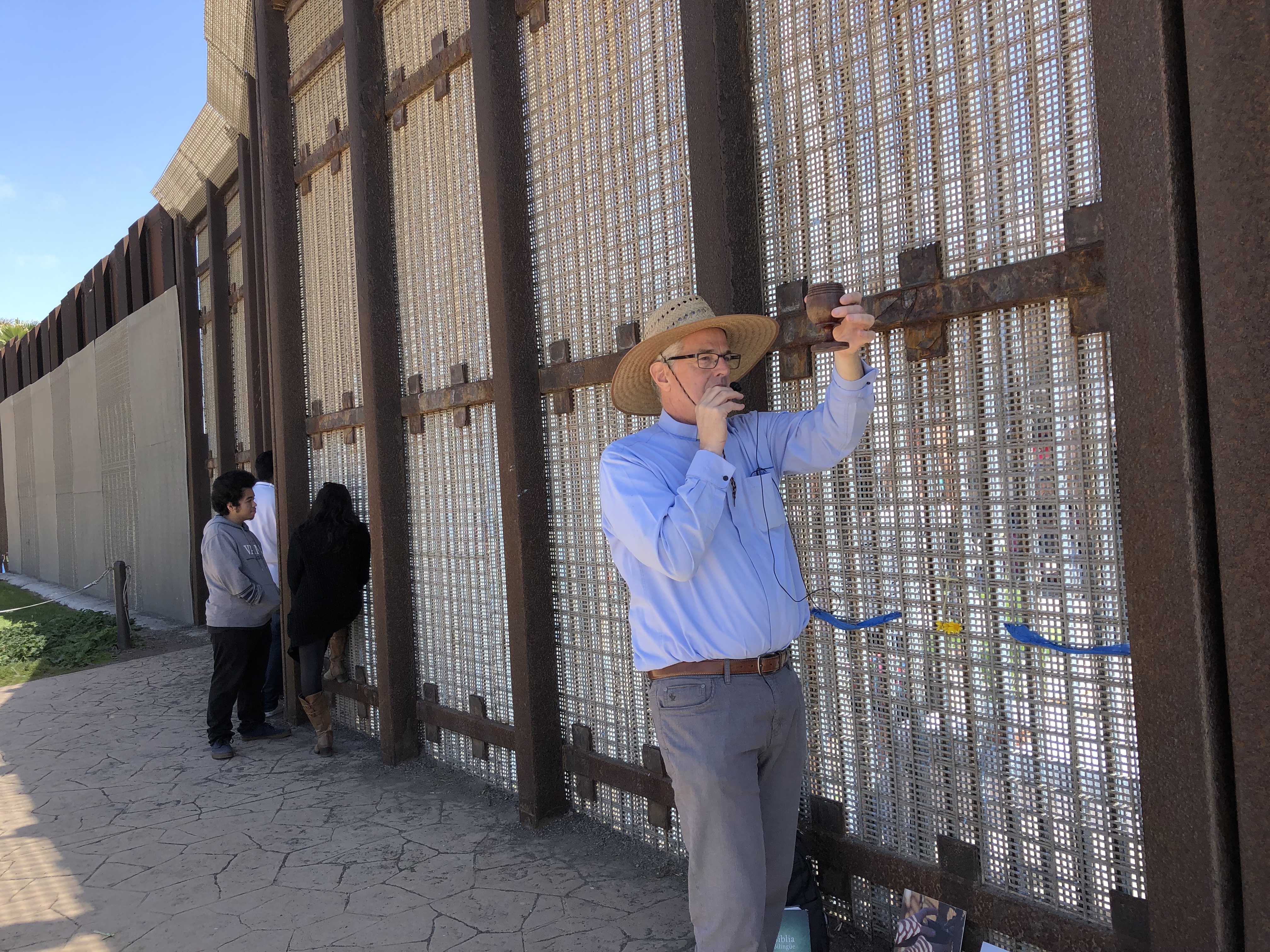 Each Sunday, U.S. Border Patrol opens up an area called Friendship Circle in the binational International Friendship Park, which separates the U.S. side in San Diego from the Mexican side in Tijuana. The circle gives families an opportunity to communicate directly through the fence with relatives on the other side.  Ten people at a time are allowed to pass through a gate into this area, which is about a hundred feet long and where the wall is at least 20 feet high.  Slatted fencing is covered by  several layers of tightly woven steel mesh. Only finger tips can reach through and touch. Small holes in the mesh create a pixilated view of the person on the other side.

The predicament of families and friends divided by U.S. immigration policies is particularly poignant at holidays. This past Easter, while President Donald Trump was in Florida, at his luxurious spread in Mar-a-Lago, people were making their way to both sides of the beach fence at International Friendship Park.

Some on the Mexican side sang for the crowd. Members of a support group for deported U.S. military veterans served food.

On the Mexican side it’s possible to park along the beach and quickly reach the fence by foot. Reaching the U.S. side, however, involves parking a mile and a half inland and walking the rest of the way. On Easter weekend yellow, red and blue spring flowers covered the marshlands and small hills along the rutted road. While the Mexican side of the beach was full of people, the U.S. side was empty except for Border Patrol vehicles and occasional family groups, many with baby strollers. 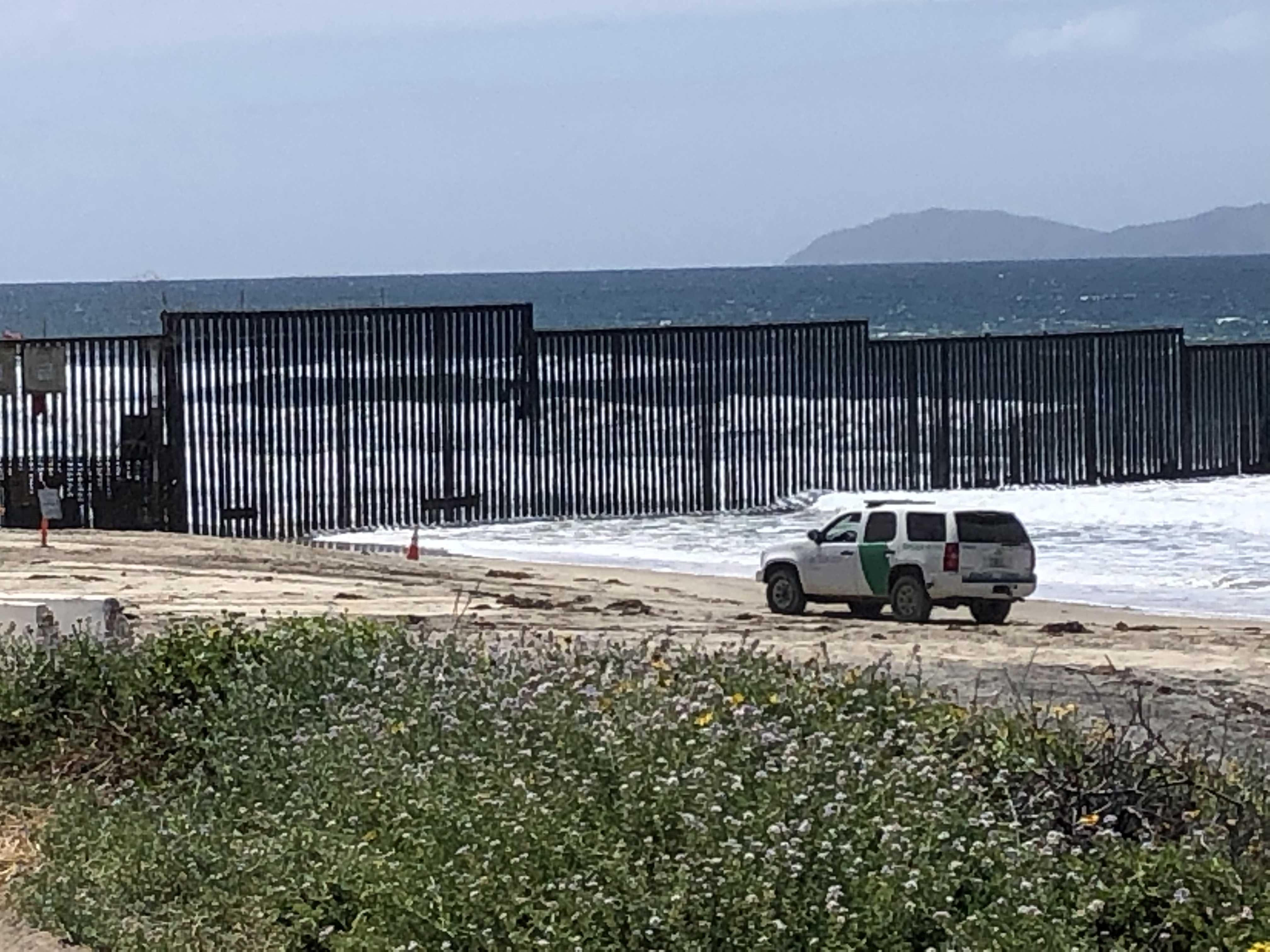 Two families on the U.S. side were talking with members of their extended family from Honduras who, like many others, were waiting in Mexico for their numbers to be called by U.S. Immigration and Customs Enforcement, or ICE, so they could be interviewed. One family has been waiting for weeks for an interview in San Diego.  In the meantime, they are living in shelters in Tijuana.

On the Mexican Side

I had been on the other side of the border several days earlier after entering Mexico at the Tijuana-San Yisidro crossing. After emerging from Mexican immigration and the fenced border-crossing passageway I  entered a large plaza.

Each morning this plaza fills with people waiting for U.S. Customs and Border Protection to arrive to give out numbers for asylum application hearings. After receiving their numbers, the people leave the plaza and a second group begins arriving — those who expect their numbers to be called that day by ICE.  Days or weeks can pass between getting a number and getting called. During that time, individuals and families must find someplace to stay in Mexico.

When a number is called, the corresponding individual or group is transported into San Diego where a hearing officer makes a preliminary decision on the asylum claim. Then things can get confusing.

In some cases, if a claim is approved for a final court appearance the person gets taken to a detention facility in the San Diego area. A few are released with an ankle bracelet and are allowed to stay in the U.S. with a sponsoring host family. But most, under a new U.S. policy called “Return to Mexico,” are sent back to await the second interview.

Since applicants have no way of knowing which of these three options will pan out, they take their belongings with them, to be ready for anything. The shelter in Mexico where they have been staying may not have a space if they are sent back. One U.S. judge reportedly told an applicant: “If I return you to Mexico, the issue of where you are going (to stay in Mexico) is not before the court.”

In a particularly inconsiderate arrangement, people who have received numbers at the Mexicali-Calexico crossing do not have hearings in Calexico, the closet U.S. town, but must travel to Tijuana, a two-and-a-half hour drive away. Local churches and civic organizations that lodge applicants in Mexicali organize buses and vans. Missing the calling of a number is the end of the line. The case will not be heard later.

On the Mexican side of the border, churches and other assistance groups are filled to capacity with those waiting for their numbers to be called.  A Catholic Church, Igelsia Embajadores de Jesus (Church of Jesus’s Ambassadors), is one of the places in Tijuana that provides shelter. The unpaved road leading to the church has large potholes and is impassible by vehicle during the rain.  Gustavo Banda, the pastor of the church for the past 25, said that the church is currently housing 250 people, but has held over 500 at times.

Approximately 100 Haitians and 150 Central Americans are living in small tents inside the church.  Each family has one or two tents depending on its size. Cooking is done by residents; one kitchen is for spicy Haitian food and another for Central American cuisine. Mexico allows applicants to work while they are waiting and several people have found daily/hourly low paid work. Each morning, they walk up a winding paved road on the last hill that leads up to the four-lane road to Tijuana to get to work.  Pastor Banda said that those working proudly contribute what they can to the purchase of food for the kitchens. 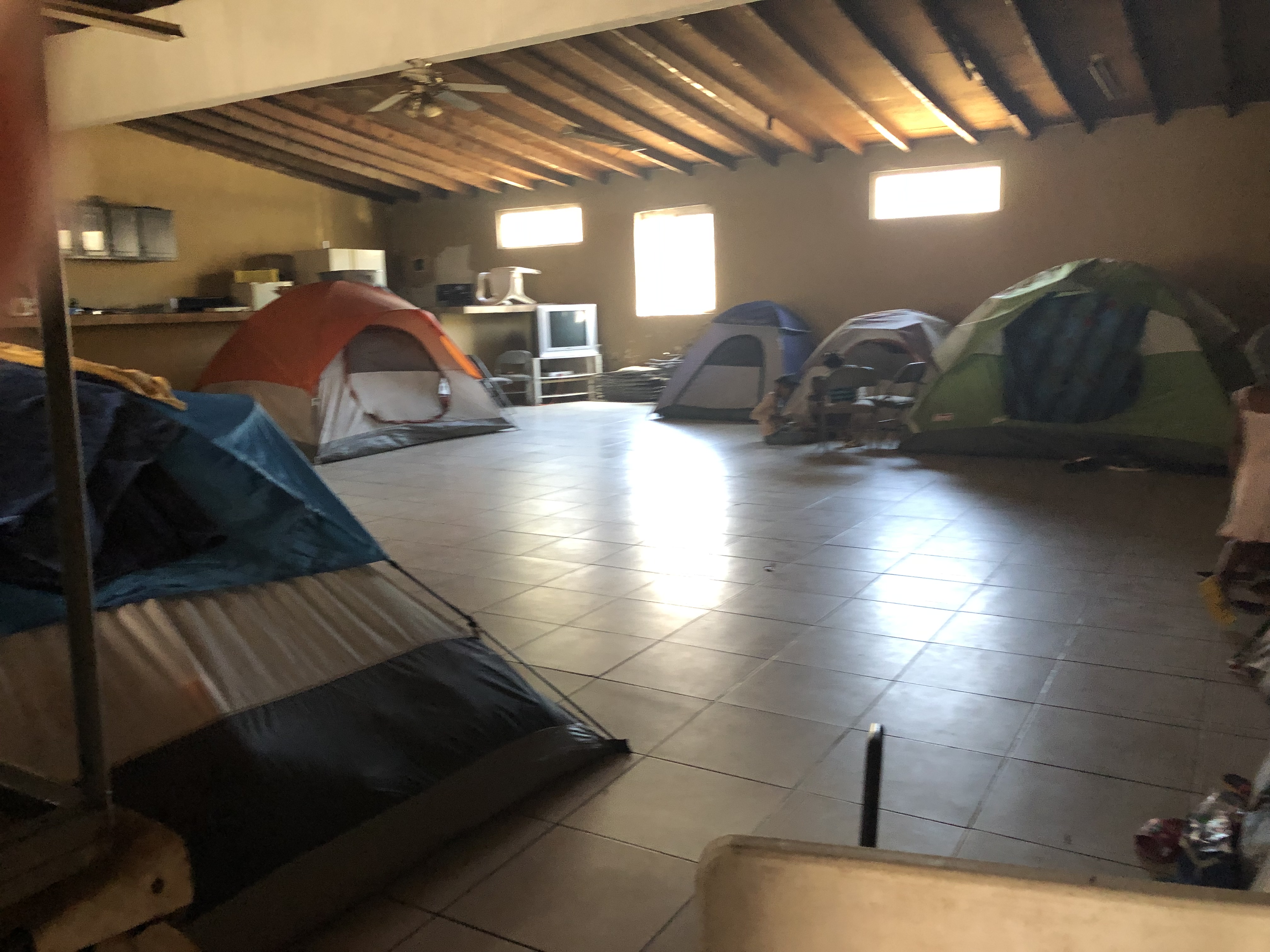 On the U.S. side of the border, organizations in San Diego have a rapid response team that gets daily calls from ICE saying they are releasing people from detention facilities. These people need assistance finding  places to stay during the final adjudication of their cases, which may take many months.

The detention facilities, meanwhile, are reportedly overcrowded, frigidly cold and very unfriendly.  In response, a local coalition of nonprofit organizations, the San Diego Rapid Response Network, provides short-term shelter. Members of this network include Jewish Family Service; the American Civil Liberties Union of San Diego and Imperial Counties and  Safe Harbors Network, a coalition of religious and other groups.

Last month, a family in San Diego was hosting a family awaiting adjudication of their asylum application.  The father, mother and teenage son are Jehovah Witnesses from Russia. After waiting for six months in Mexico, they were allowed into the U.S. and put in a detention facility.  They were placed in the private home through Safe Harbors. Both parents wear ankle bracelets and are waiting for a hearing on whether they can work in the U.S. while they wait for the final adjudication. The Rapid Response Network is sheltering 11 more Russians.

ICE has used Safe Harbors as its drop-off location for pregnant women or for women who have just given birth in San Diego hospitals.  The ministry’s founder, Pastor Bill Jenkins, said that in 2018, 24 babies were born to women seeking asylum and living in the church — about one every two weeks.  “Sometimes I wonder if I’m running a shelter or a maternity ward,” Jenkins said.

Last autumn while in McAllen, Texas, a group of us with Veterans for Peace witnessed buses arriving from detention facilities in south Texas.  The local branch of Catholic Charities, the anti-poverty network based in Alexandria, Virginia, meets buses that arrives each afternoon with people released from detention. The buses let the people off three blocks from the bus station and they are told to “walk straight ahead for three blocks.”

Volunteers greet them at the station and help get them get bus tickets to the cities of their sponsors.  If they arrive so late in the afternoon or evening that they have missed their bus, Catholic Charities houses them in a nearby shelter for one night.  These people are not free. Everyone who is 16 or older wears ankle “bracelets” until they are either awarded a status or deported to their home country.

in Tijuana, Al Otro Lado (On the Other Side) is a legal collective that includes U.S. immigration lawyers who help applicants prepare for the hearing in the U.S.  ICE, apparently, frowns on Al Otro Lado as a group that coaches applicants on what to say to make their claim more believable.  Al Otro Lado lawyers say that most asylees have no idea what the hearings entail and they are merely explaining what to expect.  Al Otro Lado is one of many organizations trying to make the application process more humane.

Ann Wright served 29 years in the U.S. Army/Army Reserves and retired as a colonel.   She was a U.S. diplomat for 16 years and served in U.S. embassies in Nicaragua, Grenada, Somalia, Uzbekistan, Kyrgyzstan, Micronesia, Afghanistan and Mongolia.  She resigned from the U.S. government in March 2003 in opposition to President George W. Bush’s war on Iraq. She is co-author of “Dissent: Voices of Conscience.” A version of this  article was first published by Roots Action.

13 comments for “Waiting for Your Asylum Number to Get Called”