From Paris, Léa Bouchoucha reports for Consortium News on two sets of demonstrators, some of whom are mingling while others keep a distance.

Some had hoped the two marches in Paris last Saturday— one focused on global warming and the other representing the 18th straight weekend of Yellow Vest protests  — would join forces and help unite environmental activism with social equity.

On March 8, Cyril Dion, a well-known documentary film maker and environmental writer, gave a joint interview to Le Parisien with Priscillia Ludosky, considered one of the founders of the Yellow Vest movement, in which they  both encouraged protesters to march together.

To an extent that happened. Yellow vests were a common sight in the climate demonstrations on Saturday. And nongovernmental groups — Greenpeace France, the Nicolas Hulot Foundation, SOS Racisme, Friends of the Earth, 350.org and Alternatiba — voiced a fusion of environmental and economic demands. “Time to change industrial, political and economic systems, to protect the environment, society and individuals,” was a typical message expressed on one banner. 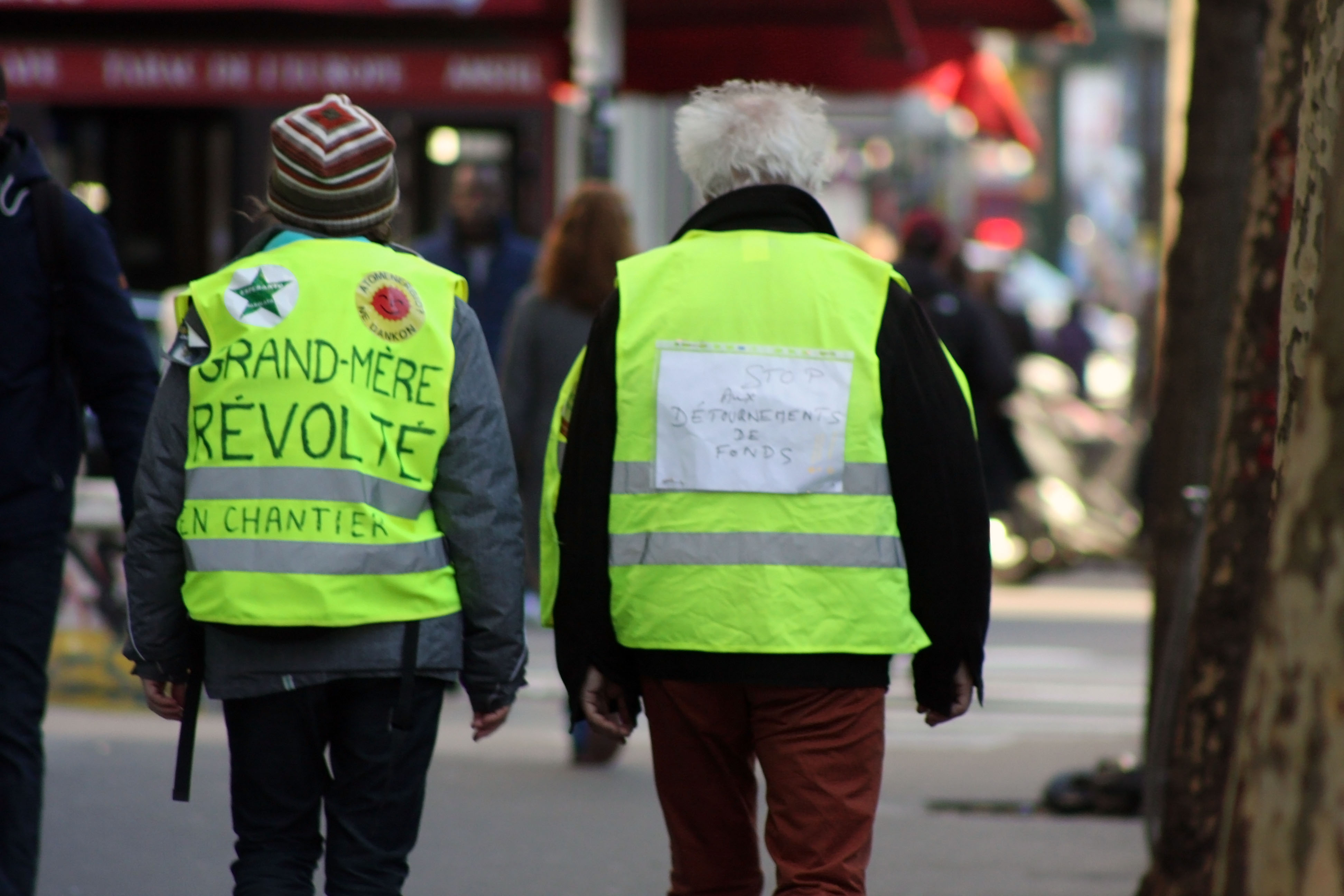 The contrasts between the two demonstrations, however, wound up drawing the main press attention. Coverage by outlets such as Reuters and the Associated Press emphasized how the march on climate change — which drew around 45,000 in Paris, according to media estimates — was peaceful and included movie stars. The smaller Yellow Vest demonstration in the capital, estimated at around 10,000, was marked by rioting and vandalism.

Some Yellow Vests disagree with violence in demonstrations. But plenty of images have spread on social media that show a few protesters posing proudly in front of vandalized, expensive restaurants and luxury shops along the Champs-Elysées Avenue.

A strong majority of French — 84 percent of those polled — condemned the violence in a survey released March 20 by Elabe, an independent consultancy.

‘Part of the Game’

Stephanie Albinet, who wore a yellow vest to Saturday’s climate demonstration, would have been in the minority of that polling group. She was sanguine about the looting and police confrontations she’d personally witnessed at another point that day along Champs-Elysées. “That’s part of the game I would say. At some point we should stop treating the people like fools.”

Consortium News asked Albinet about another criticism of Yellow Vests: that they are too tolerant of xenophobia and bigotry.

“Yellow vests are not all anti-Semitic, racist, violent people,” Albinet responded. “They are people like me who for the past four months have finally found hope in seeing the population wake up. For the past 25 years I did not give a crap about France, but now I feel like a patriot for the first time.”

Francois Amadieu, a professor at Pantheon Sorbonne University who studies social movements, noted in a phone interview from his Paris office that protest violence can achieve results. “It’s classical and always an issue in France,” he told Consortium News. “In terms of timing. French executive power has often made concessions under pressure. It was for instance the case on Dec. 10 when the government announced some measures after two very violent Saturday protests.”

France24 reports that the government has attributed the violence to extreme elements – so-called casseurs – who have infiltrated the movement from both the left and right. The episode is drawing public attention to “black bloc” anarchists who have been associated with the most extreme violence.

Amadieu said that black bloc militants aren’t acting out of spontaneous emotions. “They have long theorized that violence and vandalism will launch a state reaction by the police. This repression, in the form of tear gas and so on will gradually cause protestors to become more radicalized and understand this violence. Black bloc theory also assumes that people become bored in authorized protests and when there is spillover [into criminal behavior] people stop being bored and become motivated to reclaim the streets, and so forth.”

Despite some mingling of climate and Yellow Vest protesters, Amadieu said it was significant that a core of Yellow Vests refrained from joining the climate march. “Usually, this convergence does not work out as it is not the same sociology,” he said.

Corentin Durand, a 26-year-old physics post-graduate student who wore a yellow vest to the climate march, hopes the two movements are merging. “We should fight a battle on two fronts,” he said Saturday as the climate protest moved through the city’s Grands Boulevard neighborhood. “I can’t deal with the fact that our society is fully dependent on people who work very hard every day to make ends meet. It’s intolerable,” Durand said. ‘I hope that fighting climate change will bring social justice for everybody.” 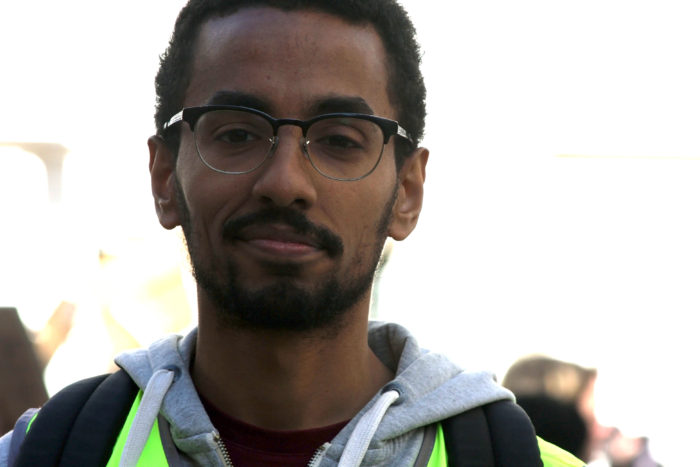 Durand said his apprehensions about global warming affect his everyday routine. “All day long, in each of my actions; when I turned on the light or the tap, I’m wondering how it would impact the environment. I never ride in elevators, always take public transit and bike and never get on a plane.”

Public transit, however, is patchy in rural France. And when President Emanuel Macron tried to initiate his climate-protection agenda by raising fuel prices, he notoriously ignited the Yellow Vest movement, which sent a loud message not to expect low-income people, already struggling to pay their bills, to pay a disproportionate price for climate mitigation.

In response to Yellow Vest pressure, Macron on Jan. 15. launched a two-month-long “big debate” of listening tours and town halls and citizen input via booklets of complaints.  Some thought the process had been lulling the Yellow Vests into complacency, but Saturday’s protests countered that impression.

Attempts to make climate policy more socially equitable are coinciding with  Yellow Vest pressures on the Macron government.  On March 5 in the context of the “big debate,” 19 nongovernmental organizations presented the government with 66 proposals as part of a new ecology and social compact to ensure the country’s environmental transition program is done more equitably.

One champion of this effort is Nicolas Hulot, a former environment minister and longtime campaigner who resigned on live radio on Aug. 28 out of impatience with the government’s foot dragging on climate and other goals.

Laurent Berger, a prominent unionist, is also aligned with the effort. “There is no contradiction between social consciousness and the respect of the environment,” Berger told Le Monde. “In our pact, we find environmental organizations, unions, anti-poverty, housing, youth associations and popular education movements.”

In the same article, Hulot promoted “big bang” reform of a tax system skewed in favor of the affluent. “The current system is unfair, and the burden is not equally shared,” Hulot is quoted as saying.

Stéphane Cuttaïa lives in rural France, the stronghold of the anti-system Yellow Vest movement that generally regards the Macron government as indifferent to its concerns and preoccupied with European Union affairs and urban centers of wealth.

“We’re very interested in revitalizing the local economy,” Cuttaïa said by phone this week from his home in the Île-de-France region. “The Yellow Vests speak to this. What we see today in France is that there are large cities —Paris, Lyon, Bordeaux, Marseille — and then there are many rural and semi-rural territories where public services and trade have disappeared. Residents here are forced to go long distances to shop, see a doctor. It is generating many energy costs.” 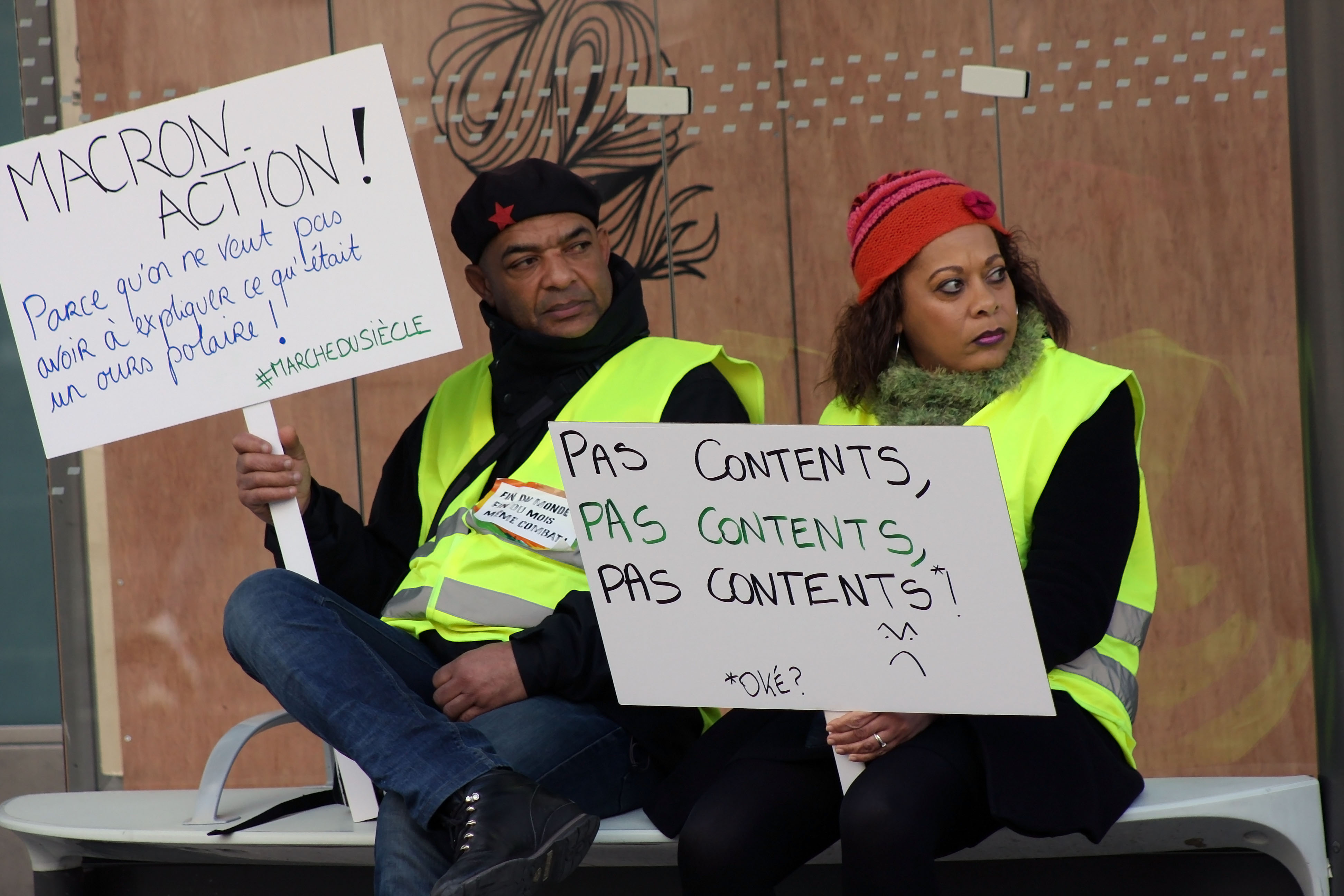 Cuttaïa runs C’est déjà ça — a café that he describes as providing a community center in the small town of Saâcy-sur-Marne, around 75 kilometers from Paris. In November, he used social media networks to launch Green Vests, a largely citizen initiative that hopes to mix Yellow-Vest and “green” environmental issues. The Green Vests are now circulating an online petition with 30 proposals. One of those proposals is free public transportation in rural areas; a more equitable approach to reducing emissions than Macron’s attempt to raise fuel prices.

“We recognize our social concerns in the Yellow Vest movement, but we think that measures regarding ecological emergency are very limited,” Cuttaïa said. “We want to create a bridge between the different organizations mobilized on behalf of climate deregulations, biological exterminations and social claims.”

Bernard Guericolas, a 75-year-old retiree who joined the environment protests in Paris on Saturday, regrets the years that have been lost to inattention and inaction on global warming. “When I was young, I was happy to take a plane ride,” Guericolas said. “I wouId have loved to own a big car had I been able to afford one. But I had it all wrong. We were not aware of what we did. In my mind, it’s the role of politicians to anticipate and it is what they are paid to do. At the end, we (our generation) are guilty, but we are not accountable.” 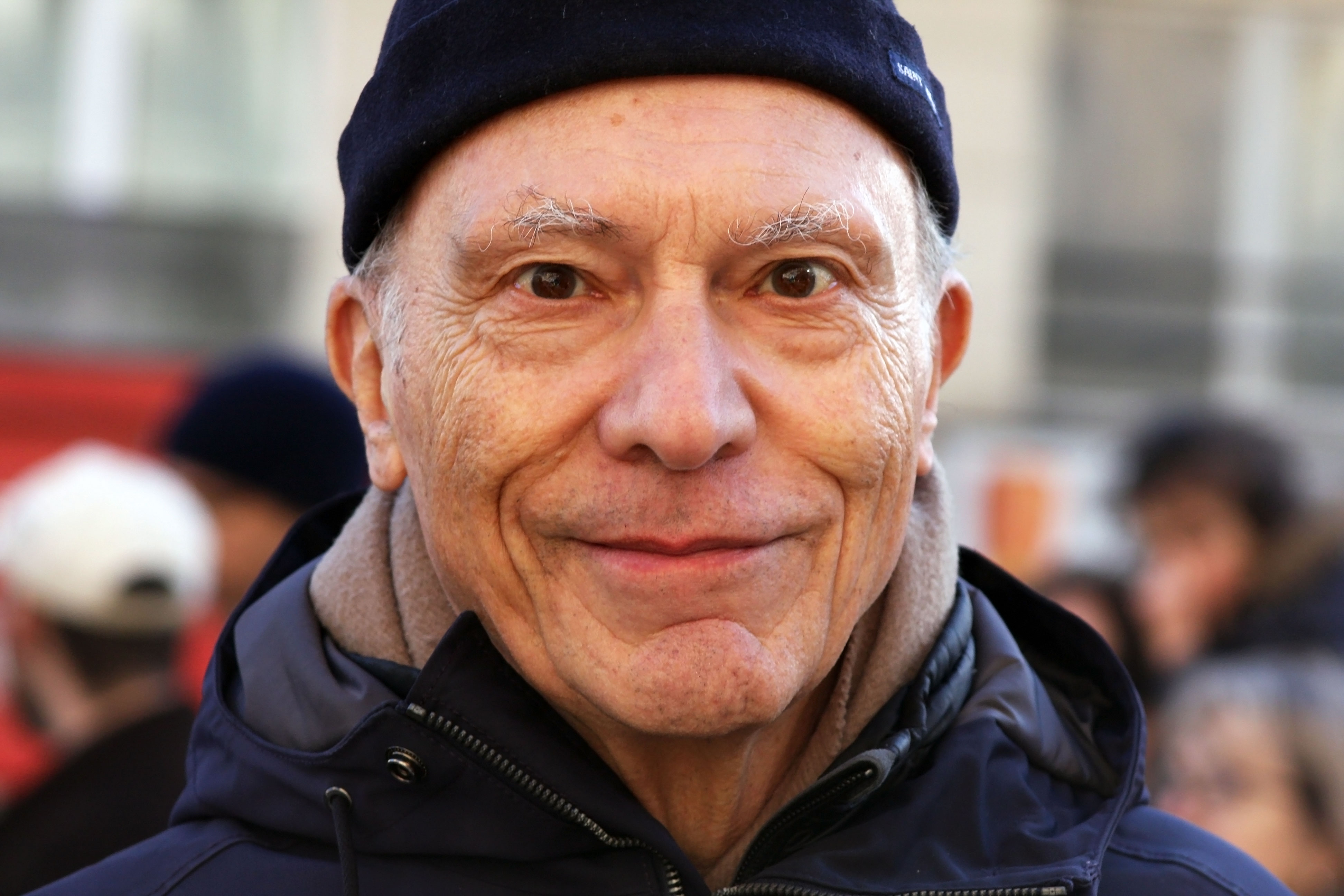 Bernard Guericolas: “My generation guilty, but not accountable.” (Lea Bouchoucha)

Along with 2 million other French people so far, Guericolas signed an online petition in support of the lawsuit that several nongovernmental groups filed on March 14 against the government for climate inaction.

The lawsuit, which is similar to litigation confronting several other governments around the world, is probably more important politically than legally, says Arnaud Gossement, a professor at Sorbonne University in Paris who specializes in environmental law and spoke by phone. “The lawsuit helped to stir the mass mobilization we saw this weekend, but from a legal point of view, it’s more complicated.” For one thing, Gossement said, a judge could dismiss the case. And if the case goes forward, it could take several years. “And we do not have time to wait.”

That sense of urgency — long pent up among climate activists — is motivating young people worldwide to follow the lead of the 16-year-old Swedish activist Greta Thunberg, who last year began cutting school, holding solitary demonstrations outside the Swedish parliament and questioning the point of schoolwork when the future of humanity looked so uncertain.

In a scathing speech at a UN climate conference — during which she told participants “our civilization is being sacrificed so a very small number of people can continue making enormous amounts of money”—she became an international sensation and role model.

On Friday, March 15, Eponine Bob was one of them as she joined the Global Student Strike march in Paris. “I’m here because our generation is going to live with the effects of global warming, ” the teenager told Consortium News. “People are afraid.”

Bob said she tries to do her best to consider her personal effect on the environment in everyday life. “But in the end, it’s not families that pollute the most. It’s [corporate] lobbies and big companies,” she said. “I don’t think that there is enough regulation and it’s become a real issue.”