Christine Assange, the mother of WikiLeaks founder and publisher Julian Assange, had her Twitter account restored more than 24 hours after it was abruptly restricted by the social media company.

Hundreds of tweets were sent to the San Francisco-based company by supporters demanding that she regain access to her account.

Ms. Assange tweeted at 10:33 p.m. U.S. Eastern time on Wednesday: “Back on deck! Many thanks to everyone contacting @Twitter on my behalf. Thanks to @Twitter for responding with a reconnect.”

Ms. Assange told Consortium News by phone that she has had no contact with Twitter and still does not know why her account was restricted and precisely why it was restored. She was unable to post new Tweets or read anyone else’s while the restriction was in place.

Outrage at the restriction was expressed by many Assange supporters in tweets to Twitter and its CEO, Jack Dorsey.

Another supporter wrote: “The only unusual activity is not seeing a mother fight for her child. It’s unnatural and cowardly to think that her tweets are unusual.”

On Thursday, @TelesurEnglish, the Venezuelan state broadcaster’s English service, was hit with the same restrictions by Twitter as had Ms. Assange, who tweeted a complaint about it: 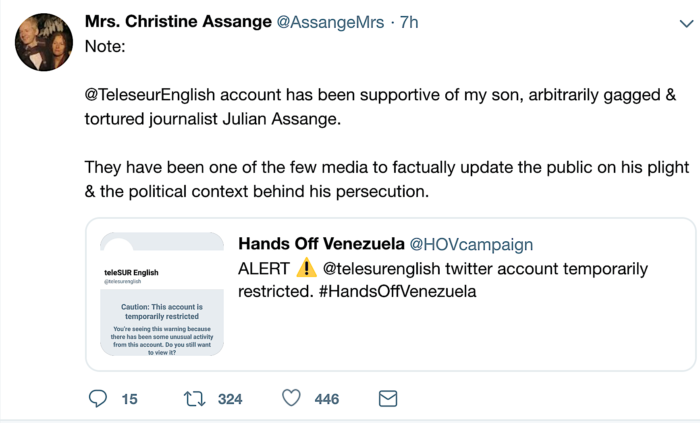 ← Yellow Vest Movement Not Yet Changing Its Color to Green
Whose Blood, Whose Treasure? →