The social media giant has given no reason to Christine Assange who had turned to Twitter to campaign for the liberty of her son.

The Twitter account of Christine Assange, the mother of the arbitrarily detained founder of WikiLeaks, has been restricted, she told Consortium News on Tuesday.

“My Twitter account has been ‘blocked due to ‘unusual activity,'” Ms. Assange wrote in a text message. Twitter, however, has provided her no reason for its action.

Ms. Assange is a prolific user of Twitter in her campaign to free her son who has been a refugee in the Ecuador embassy in London since 2012.

Twitter has posted the following message on her page: 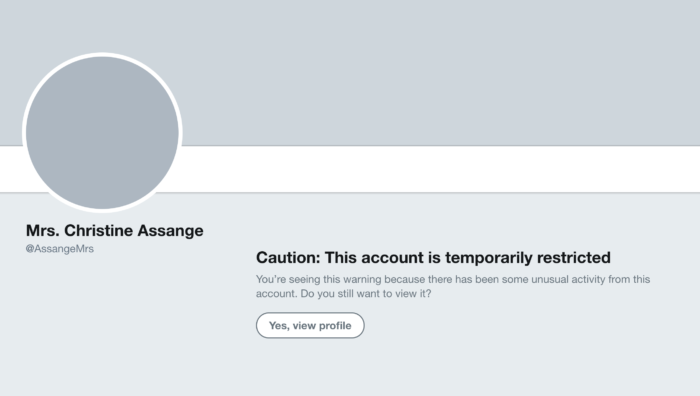 While a user can access her page by agreeing to view her profile, Ms. Assange told Consortium News she is unable to post new Tweets to her account nor see anyone else’s.

Her last post, at 11:55 am on Tuesday in Australia, where she lives, is a retweet of an article published about her son. She posted 12 tweets in the past 24 hours. “Interesting that it followed on from a day of my tweets about free speech and calling on journalists globally to stand up for Julian,” Ms. Assange said in a text message.

In the past ten days, Ms. Assange tweeted direct replies to Hillary Clinton and John Bolton, the U.S. national security adviser. Bolton had tweeted on March 9: “US military should use #Wikileaks for cyber warfare target practice. Take down their capabilities & prevent further harm to nat’l security.”

Ms. Assange’s reply to Bolton is no longer visible under his tweet.  Nine replies to Bolton are now “unavailable.” Ms. Assange said in a text message that her reply began by calling Bolton’s tweet, “Fascist talk!” 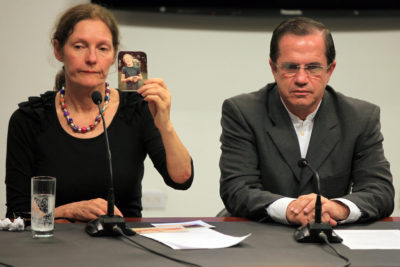 In response to the New Zealand massacre, Clinton tweeted on March 15: “My heart breaks for New Zealand & the global Muslim community. We must continue to fight the perpetuation and normalization of Islamophobia and racism in all its forms.”

Ms. Assange directly replied to Clinton: “Hang on Hillary! My son, published your pre Presidential run bragsheet ‘Tick Tock’ (email) on #Libya! As a result of your trophy War in Libya, you were responsible for 40,000 deaths, ISIS expansion, womens slave market in Libya, & the subsequent refugee crisis in Europe!”

Clinton was “in nauseating false sympathy,” Ms. Assange said in a text message.

Twitter uses algorithms unknown to the public to remove, block, suspend or restrict accounts of its users. Like other social media companies, Twitter has also come under intense U.S. congressional pressure to censor accounts deemed hostile to U.S. interests.

Julian Assange has remained in the embassy to avoid arrest by British authorities for skipping bail from an investigation by Sweden that has since been dropped. He has not been charged with a crime by either Sweden or Britain.

Assange was granted political asylum by the previous government of Ecuador seven years ago. The current government, however, has made it known it wants him to leave and has made various moves to force him out.  His contact with the outside world has been restricted.  Twitter deleted his account on March 28, 2018. British authorities have not permitted him to leave the embassy for urgent medical treatment without being arrested.

Assange fears that if he is arrested by London police once he leaves the embassy that he will be extradited to the United States where a secret grand jury is preparing an indictment against him, most likely under the Espionage Act. Grand jury proceedings are still underway in an Alexandria, Virginia courtroom.

← 60 Years Ago, Racists in Congress Nearly Cost Hawaii Statehood
Yellow Vest Movement Not Yet Changing Its Color to Green →