Whether Biden can win the 2020 Democratic presidential nomination will largely depend on how little voters know about his actual record, writes Norman Solomon.

Biden is No Friend of the Working Class;
Solidly Backed Invasion of Iraq in 2003

When The New York Times front-paged its latest anti-left polemic masquerading as a news article, the March 9 piece declared: “Should former Vice President Joseph R. Biden Jr. enter the race, as his top advisers vow he soon will, he would have the best immediate shot at the moderate mantle.”

On the verge of relaunching, Biden is poised to come to the rescue of the corporate political establishment — at a time when, in the words of the Times, “the sharp left turn in the Democratic Party and the rise of progressive presidential candidates are unnerving moderate Democrats.” After 36 years in the Senate and eight as vice president, Biden is by far the most seasoned servant of corporate power with a prayer of becoming the next president.

When Biden read this paragraph in a recent Politico article, his ears must have been burning: “Early support from deep-pocketed financial executives could give Democrats seeking to break out of the pack an important fundraising boost. But any association with bankers also opens presidential hopefuls to sharp attacks from an ascendant left.”

The direct prey of Biden’s five-decade “association with bankers” include millions of current and former college students now struggling under avalanches of debt; they can thank Biden for his prodigious services to the lending industry. Andrew Cockburn identifies an array of victims in his devastating profile of Biden in the March issue of Harper’s magazine. For instance:

Media mythology about “Lunch Bucket Joe” cannot stand up to scrutiny. His bona fides as a pal of working people are about as solid and believable as those of the last Democratic nominee for president. 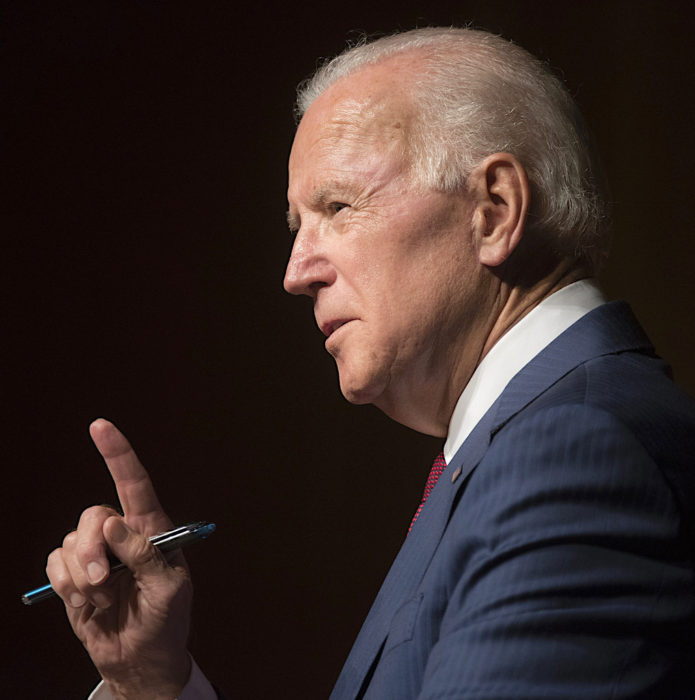 But Biden’s fealty to corporate power has been only one aspect of his many-faceted record that progressives will widely find repugnant to the extent they learn about it.

Since the #MeToo movement began, some retrospective media coverage has assessed Biden’s highly problematic role in chairing the Clarence Thomas—Anita Hill hearings of the Senate Judiciary Committee. And in recent days, Washington Post reporting has brought into focus his backstory of pandering to white racism against African-Americans during much of his Senate career.

As a 32-year-old senator in 1975, Biden commented: “I do not buy the concept, popular in the ’60s, which said, ‘We have suppressed the black man for 300 years and the white man is now far ahead in the race for everything our society offers. In order to even the score, we must now give the black man a head start, or even hold the white man back, to even the race.’ I don’t buy that.”

More attention is also needed to Biden’s role as Judiciary Committee chair pushing through the now-notorious landmark 1994 crime bill. In the process of championing the bill, Biden warned of “predators on our streets” during a 1993 speech on the Senate floor.

Now, a new Iowa poll shows Biden and Bernie Sanders neck and neck in the first-in-the-nation contest for the nomination, with the rest of the candidates far behind in the state. For quite a while, Biden has been sharpening his hatchet to swing at progressive populism in general — and Bernie in particular.

In typical Biden style, the former vice president is eager to stake out the middle of the road, between ultra-predatory capitalism and solidarity with working-class people. At an October 2017 gathering in Alabama, he said: “Guys, the wealthy are as patriotic as the poor. I know Bernie doesn’t like me saying that, but they are.” Later, Biden elaborated on the theme when he told an audience at the Brookings Institution, “I don’t think five hundred billionaires are the reason we’re in trouble. The folks at the top aren’t bad guys.”

As Branko Marcetic pointed out in Jacobin last summer, “at a time when left-wing populism is increasingly accepted as the antidote to Trump and the GOP’s nativist and corporate-friendly pitch, Biden stands as a remnant of precisely the sort of left-averse, triangulating Democratic politics that Hillary Clinton was relentlessly criticized for personifying.”

Biden makes clear his distaste for the current progressive populist wave. “I know some want to single out big corporations for all the blame,” he wrote in a blog post. “It is true that the balance has shifted too much in favor of corporations and against workers. But consumers, workers, and leaders have the power to hold every corporation to a higher standard, not simply cast business as the enemy or let industry off the hook.”

Supports the Business of War 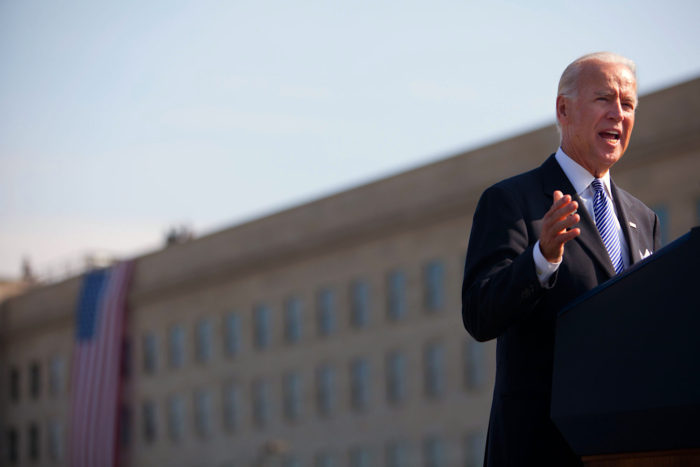 One of the many industries that Biden has a long record of letting “off the hook” is the war business. In that mode, Biden did more than any other Democratic senator to greenlight the March 2003 invasion of Iraq.

It wasn’t just that Biden voted for the Iraq war on the Senate floor five months before it began. During the lead-up to that vote, in August 2002, as chairman of the Foreign Relations Committee, he presided over sham hearings — refusing to allow experts who opposed an invasion to get any words in edgewise — while a cavalcade of war hawks testified in the national spotlight.

“It is difficult to over-estimate the critical role Biden played in making the tragedy of the Iraq war possible,” Middle East studies professor Stephen Zunes wrote. “More than two months prior to the 2002 war resolution even being introduced, in what was widely interpreted as the first sign that Congress would endorse a U.S. invasion of Iraq, Biden declared on August 4 that the United States was probably going to war. In his powerful position as chair of the Senate Foreign Relations Committee, he orchestrated a propaganda show designed to sell the war to skeptical colleagues and the America public by ensuring that dissenting voices would not get a fair hearing.”

Joe Biden’s friendly TV persona appeals to many. He smiles well and has a gift of gab. Most political journalists in the mass media like him. He’s an apt frontrunner for the military-industry complex and the corporate power structure that it serves. Whether Biden can win the 2020 Democratic presidential nomination will largely depend on how many voters don’t know much about his actual record.

Norman Solomon is cofounder and national coordinator of RootsAction.org. He was a Bernie Sanders delegate from California to the 2016 Democratic National Convention and is currently a coordinator of the relaunched Bernie Delegates Network. Solomon is the author of a dozen books include War Made Easy: How Presidents and Pundits Keep Spinning Us to Death.

← Is War With Iran on the Horizon?
A Tale of Two Incarcerated Women →

63 comments for “Joe Biden on the Relaunch Pad”