By Max Blumenthal
in Caracas
Grayzone

The trucks failed to reach the other side — but that was never really the point of the stunt. As Father Sergio Munoz, a right-wing Venezuelan activist posted on the Colombian side of the border, explained to journalist Dan Cohen, the humanitarian “aid” was a purely symbolic provocation aimed at discrediting Venezuelan President Nicolás Maduro in international eyes and generating waves of destabilizing violence.

By the end of the day, the trucks lined up on the Francisca de Paula Santander bridge were flanked by gangs of guarimberos. 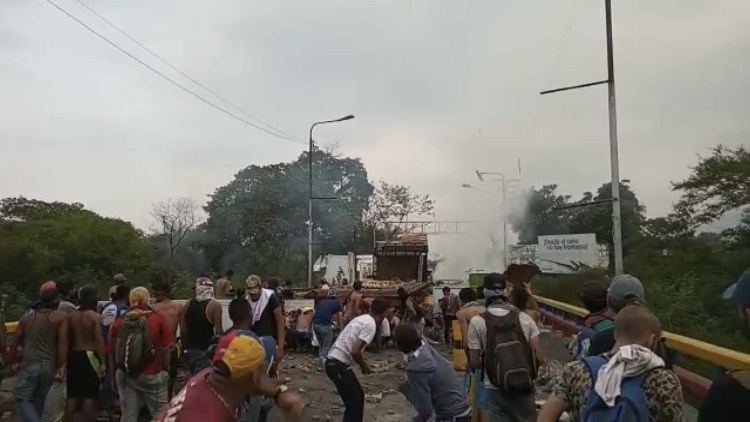 These were the nihilistic masked youth who form the shock troops of the right-wing opposition, and who placed Caracas under siege with violent barricade protests, known as guarimbas, at several points between 2014 and 2017. A mob of guarimberos burned to death Orlando Figuera, a 22-year old black Venezuelan accused of supporting Maduro, on an eastern Caracas street in broad daylight, back in June 2017.

On the Santander bridge this Feb. 23, the guarimberos rained down a hail of rocks and molotov cocktails on Venezuelan national guardsmen holding the line against the USAID trucks. Suddenly, the trucks caught fire and the masked youth began unloading boxes of aid before they burned. Within minutes, pro-opposition media reported that the Venezuelan national guard forces were responsible for the fires.

A reporter for the private anti-government channel NTN24 claimed without evidence that the Venezuelan security forces had caused the fires with tear gas:

Another false flag at the border with Colombia. A "reporter" from @NTN24ve (opposition tv known for fake news) said a truck went on fire because the Venezuelan police launched tear gas. Let me know if you've seen tear gas burn a truck before#Venezuela #HandsOfVenezuela pic.twitter.com/P5uRWEBgCd

The claim was absurd on its face. I have personally witnessed tear gas canisters hit every kind of vehicle imaginable in the occupied Palestinian West Bank, and I have never seen a fire like the one that erupted on the Santander bridge.

In 2013, the San Bernadino Sheriff’s Department deployed special incendiary teargas canisters (“burners”) to torch the house where fugitive cop killer Chris Dorner had holed up. But it is highly unlikely that the Venezuelan national guardsmen had anything like this weapon in their arsenal when they confronted the rioters on Feb. 23.

The total lack of evidence of Venezuelan culpability did not stop Cuban-American Sen. Marco Rubio from tweeting this accusation from nearby in Cucuta, Colombia:

They may not realize it yet but today the Maduro Regime made it easier to isolate them internationally.

After today it will be difficult for nations to remain neutral. And for their allies to continue to support it defend them. (Cont)

Sen. Dianne Feinstein, who is facing calls for her own resignation after video appeared of her condescendingly browbeating a group of environmentalist children, repeated Rubio’s baseless allegation, using it to call for Maduro to step down.

By blaming the Venezuelan government for burning the USAID trucks, Rubio was clearly attempting to establish the casus belli he had been seeking. Yet neither he nor anyone in the “whole world” had seen the national guard set the fire, as he claimed. In fact, the evidence pointed in the exact opposite direction, suggesting that the masked opposition youth had torched the trucks themselves.

Colombian writer Humberto Ortiz produced footage from a pro-opposition channel showing what appears to be the exact moment when a guarimbero sets the aid on fire with a molotov cocktail:

Telesur reporter Madelein Garcia published photographs showing a guarimbero with a gas canister next to one of the burning trucks:

Drone footage also published by Garcia shows how far away the trucks were from Venezuelan national guardsmen when they caught fire, and demonstrates that they were clearly on the Colombian side of the border:

Even Bloomberg News, which has run a relentless stream of pro-opposition reports, published video showing guarimberos on the bridge making molotov cocktails, which could easily set a truck cabin or its cargo alight:

MORE: A member of the Venezuelan army defects during clashes at the Simon Bolívar border bridge. The defector was dragged to a building of the Colombian Migration office and protected by the Colombian police #tictocnews pic.twitter.com/NJkPxlN4Lq

Meanwhile, the International Red Cross issued a statement condemning Venezuelan opposition activists disguising themselves as Red Cross workers – a blatant breach of humanitarian protocol. A screenshot from pro-opposition NTN24 coverage shows a fake Red Cross worker near one of the burning trucks:

The International Red Cross condemns yet another deception by the Venezuelan opposition https://t.co/3NhQfGjtTP

Days ago, self-proclaimed interim president Juan Guaidó announced that he would lead a “human wave” across the bridge and into Venezuela. But as darkness fell on Feb. 23, Guaido found himself at a stormy press conference with other right-wing, U.S.-aligned Latin American leaders. By his side was Colombian President Ivan Duque, who repeated the evidence-free allegation that Venezuelan security forces had burned the aid trucks.

Having failed miserably at every phase of the coup he had attempted to engineer, Rubio ended the day with a Twitter tantrum that peaked with a call for “multilateral actions” against Venezuela’s government. What form that action could take is still unclear, but it will certainly be justified by a series of baseless claims about what took place on the Santander bridge.

← THE ANGRY ARAB: Camp David and the Ongoing Crisis of Palestine
JOHN KIRIAKOU: Washington Insider Taken Down a Peg →