Recently published book by Carter official says the president was initially hostile to Sadat’s initiative toward Israel because Carter saw it as “the end of any hope of a comprehensive peace,” says As’ad AbuKhalil in this review.

One would think there isn’t anything new to be said about the Camp David negotiations of 1978. There are enough books about the accords and about Egyptian-Israeli peace to fill a book case.

But the recent book by Stuart Eizenstat, President Carter: the White House Years (Thomas Dunne Books, 2018), adds information and insights to the plethora of works on the subject. It’s clear Eizenstat, a domestic policy advisor to Jimmy Carter, kept copious notes (as detailed as the notes of H. R. Haldeman in Nixon’s White House) during his years of service. And he supplemented his account by conducting interviews with Carter and other U.S. and foreign officials.

This book could emerge as one of the definitive accounts (in over a 1000 pages) of the Carter White House years, as far as the Middle East is concerned. Eizenstat was heavily involved in Mideast policy making though he wasn’t a specialist in foreign policy. But the administration relied on him as a liaison with U.S. Jewish organizations and as a back channel to the Israeli government.

Eizenstat admits “there is no other issue in American foreign policy where domestic politics intrudes more directly than the Middle East” (p. 409). While Eizenstat has a record of staunch support for Israel and hostility to its enemies—whoever they are—he does offer a few criticisms of the Israeli lobby and of the Israeli government. 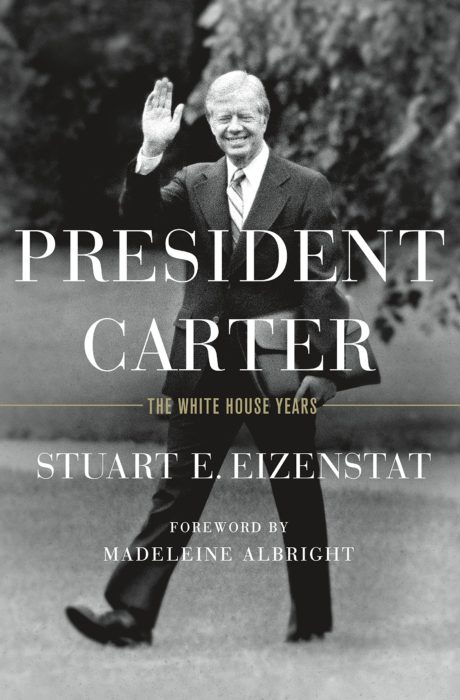 At a time when Rep. Ilhan Omar has been accused of anti-Semitism merely for suggesting that AIPAC uses its financial muscle to promote its congressional agenda, Eizenstat’s statements in this regard would have been characterized as anti-Semitic if articulated by Omar or her other fellow Muslim representative, Rashida Tlaib.

He says he helped draft a speech on Arab-Israeli issues to be delivered in “New Jersey,” he wrote, “because it would be crucial to Jews in key northeastern states, as well as Florida and California” (p. 412). Of course, one can’t today speak of a “Jewish lobby.” It could be perceived as anti-Semitic. It’s also inaccurate because the pro-Israeli lobby extends far beyond the Jewish community.

Evangelical Christians, on the whole, appear to be more fanatical supporters of Israel than Jewish Americans. On the subject of Israel, there is more diversity of opinion inside the Jewish community than there is among Southern Baptists.

The book explains clearly that the administration was divided between two camps: National Security Advisor Zbigniew Brzezinski and Secretary of State Cyrus Vance. Vance was motivated more by human rights while Brzezinski spoke for a less pro-Israeli foreign policy, largely from the standpoint of securing Arab support against the USSR.

Domestic policy advisors were solidly in support of the traditional pro-Israel line because they feared the impact on Carter’s prospects for re-election. Carter wavered between the two groups, Eisenstat writes. But he eventually surrendered to Israeli dictates in the negotiations. Even that wasn’t sufficient politically: Carter was perceived as hostile to Israeli interests and his support among Jewish voters, according to the author, plummeted to 40 percent in 1980.

Eizenstat reveals that Carter was initially hostile to Sadat’s initiative toward Israel in November 1977 because the president saw it as “the end of any hope of a comprehensive peace and will result only at best in a bilateral agreement between Egypt and Israel.” (p. 472). Carter was right but he went along with the initiative anyway.

Eizenstat’s account reflects the typical American bias of favoring pro-U.S. despots over despots who are not aligned with the U.S. Egyptian dictator, Anwar Sadat, receives glowing treatment by the author—who bizarrely insists on referring to him as “general” (p. 430) when Sadat never commanded troops in his life and his military role in his youth was rather minimal. It is possible that Eizenstat was deceived by Sadat’s fancy and elaborate military uniform, which was designed for him by Pierre Cardin.

Worse, he glosses over, or ignores, the anti-Semitism of Sadat, who referred to the Israeli lobby as “US Jews lobby” (p. 482), and who designed his overture toward Israel purely out of his “perception of the political influence of American Jews.” (p. 471) But what is disturbing is that Eizenstat justifies Sadat’s famous admiration for Hitler by maintaining that it was “less for his violent anti-Semitism than his opposition to the British.” (p. 430).

But that lame excuse could apply to the meeting between Hajj Amin Husseini (leader of the Palestinian national movement prior to the founding of the state of Israel) and Hitler, which has been used for decades to discredit the Palestinian national movement and to frame it as anti-Semitic. If the opposition to the British was the motive for Sadat’s admiration for Hitler, could that factor not also apply to Hajj Amin too? Surely, Hajj Amin could not admire the Nazi ideology where Arabs were perceived as an inferior race, described by Hitler as “painted half-apes.” And if the author describes Hafidh Al-Asad of Syria as a “brutal dictator”—which he was—he should have used the same term for Sadat.

The author does not shy away from underlining the role of the Israeli lobby. He refers to the “special triangular relationship among Israel, the American Jewish leadership, and the Congress in effectively applying pressure on the presidency to modify U.S. policy to Israel’s benefit.” (p. 437). If Ilhan Omar or another Arab member of Congress were to offer such an explanation of the role of the lobby there would have been a hue and cry and calls for resignation. And Eisenstat was wrong in referring exclusively to the Jewish leadership in this regard when Evangelical Christians have become the guardians of Likud interests in the Republican Party.

Eisenstat, however, does not shy away from expressing outrage at Israeli interference in U.S. domestic politics; he writes about Moshe Dayan’s offer to help Carter with his domestic problems, “This was an amazing intrusion into domestic politics by a foreign minister, even from a friendly country,” Eisenstat writes (p. 466).

The author reinforces the view that then Israeli prime minister, Menachem Begin fiercely defended the interests of the occupation state during the Camp David negotiations, while Sadat was casual about the whole process and disregarded his own advisors when they tried to defend Egyptian interests and sovereignty.

It also becomes clear that the PLO’s stance against Sadat and the talks was correct and that neither Sadat nor Begin were serious about offering meaningful sovereignty to the Palestinian people. While Carter initially sought to offer political rights to the Palestinians, he quickly abandoned the goal once he saw that Sadat and Begin were only interested in a bilateral agreement.

Eisenstat confirms that Begin did indeed lie to Carter: that he initially offered a settlement freeze for 5 years not for 3 months—as Begin later claimed. The author says that Carter took this lie as a personal insult and it affected his view of Israel, although he never spoke about that while president. What is disturbing about this book is that Eisenstat confirms what we have known all along: that the idea of a Holocaust museum (which came out of the office of Eisenstat during Carter’s administration) was not motivated by a desire to inform Americans of the horrific tragedy, but was instead a cynical manipulation of “Jewish American voters” who were disenchanted with Carter(p. 487).

This book underlines the devastation that the Camp David accords afflicted on the Middle East region. The U.S. secured the withdrawal of Egypt and its army from the Arab-Israeli conflict in order to permit Israel to commit more aggression and occupation against a variety of Arab territories without worrying about retribution from the Egyptian army. Far from being proud of his peace achievement, Carter should be ashamed of his role in brokering an expensive bilateral treaty—against the wishes of the Egyptian people, and contrary to the vision of a Palestinian “homeland”–which Carter had promised back in March 1977.

23 comments for “THE ANGRY ARAB: Camp David and the Ongoing Crisis of Palestine”