The most obvious and significant culprit in ‘Trump Anxiety Disorder’ is the mass media, which has been fanning the flames of panic, writes Caitlin Johnstone.

A new, updated data set is now available on a psychological phenomenon that has been labeled “Trump Anxiety Disorder” or “Trump Hypersensitive Unexplained Disorder,” and it says that the phenomenon only got worse in 2018. The disorder is described as a specific type of anxiety in which symptoms “were specific to the election of Trump and the resultant unpredictable sociopolitical climate,” and according to the 2018 surveys Americans are feeling significantly more stressed by the future of their country and the current political environment than they were last year.

Two years later, the physiological effects of the Trump administration aren’t going away. A growing body of research has tracked the detrimental impacts of Trump-related stress on broad segments of the American population, from young adults to women, to racial and LGBT communities. 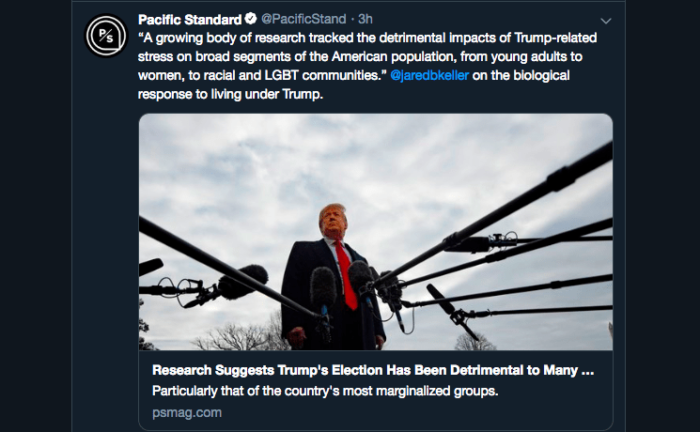 I do not for one second doubt that Americans are feeling more stressed and suffering more health-degrading symptoms as a result than they were prior to Trump’s election. But Pacific Standard and its “growing body of research” ignore the most obvious and significant culprit behind this phenomenon which is tearing people’s health to shreds: the mass media which has been deliberately fanning the flames of Trump panic.

The always excellent Moon of Alabama blog has just published a sarcasm-laden piece documenting the many, many aggressive maneuvers that this administration has made against the interests of Russia, from pushing for more NATO funding to undermining Russia’s natural gas interests to bombing Syria to sanctioning Russian oligarchs to dangerous military posturing.

New on MoA:
Putin Asks And Trump Delivers –
A List Of All The Good Things Trump Did For Russiahttps://t.co/6p6NldXfmE pic.twitter.com/uUP0xS8GEX

And yet the trending, most high-profile stories about Trump today all involve painting him as a Putin puppet who is working to destroy America by taking a weak stance against an alarming geopolitical threat. This has had the effect of manufacturing demand for even more dangerous escalations against a nuclear superpower that just so happens to be a longtime target of U.S. intelligence agencies.

Trump is clearly not a Russian asset, he’s a facilitator of America’s permanent unelected government just like his predecessors, and indeed as far as actual policies and administration behavior goes he’s not that much different from Barack Obama and George W Bush. Hell, for all his demagogic anti-immigrant speech Trump hasn’t even caught up to Obama’s peak ICE deportation years. If the mass media were in the business of reporting facts, people would be no more worried about this administration than they were about the previous ones, because when it comes to his administration’s actual behavior, he’s just as reliable an upholder of the establishment-friendly status quo as his predecessors.

Used to be that the U.S. mass media only killed people indirectly, by facilitating establishment war agendas in repeating government agency propaganda as objective fact and promulgating narratives that manufacture support for a status quo which won’t even give Americans health insurance or safe drinking water. Now they’re skipping the middle man and killing them directly by psychologically brutalizing them so aggressively that it ruins their health, all to ensure that Democrats support war and adore the U.S. intelligence community.

They do this for a reason, of course. The Yellow Vests protests in France have continued unabated for their ninth consecutive week, a decentralized populist uprising resulting from ordinary French citizens losing trust in their institutions and the official narratives which uphold them. The social engineers responsible for controlling the populace of the greatest military power on the planet are watching France closely, and understand deeply what is at stake should they fail to control the narrative and herd ordinary Americans into supporting U.S. government institutions. Right now they’ve got Republicans cheering on the White House and Democrats cheering on the U.S. intelligence community, but that could all change should something happen which causes them to lose control over the thoughts that Americans think about their rulers.

Propaganda is the single most-overlooked and under-appreciated aspect of human society. The ability of those in power to manipulate the ways ordinary people think, act and vote has allowed for an inverted totalitarianism which turns the citizenry into their own prison wardens, allowing those with real power to continue doing as they please unhindered by the interests of the common man.

The only thing that will lead to real change is the people losing trust in corrupt institutions and rising like lions against them. That gets increasingly likely as those institutions lose control of the narrative, and with trust in the mass media at an all-time low, populist uprisings restoring power to the people in France, and media corporations acting increasingly weird and insecure, that looks more and more likely by the day.