As each timeline emerged in the story, it seemed to offer a correction to an earlier version that muddied the moral of the story in its rush to judgement, says Corinna Barnard.

Consumers of news via social media knew their faces before their names. One was older, wore glasses and was chanting and striking a hand-held drum. The younger man’s complexion was lighter. He wore a red MAGA, or “make America great again,” cap. The younger one stared and smiled in a way that seemed, to many, arrogant and derisive.

They were both in Washington, D.C., in a stone-paved plaza where people gather for protests, or for sightseeing. What was instantly striking was the juxtaposition of their faces. They were too close to one another, in each others’ way somehow.

The video clip spread far and wide, generating discordant shards of outrage, arguments over which of the men was actually intimidating or disrespecting which. A big lingering question is: Did you see the “whole” video? Did you see what really happened? 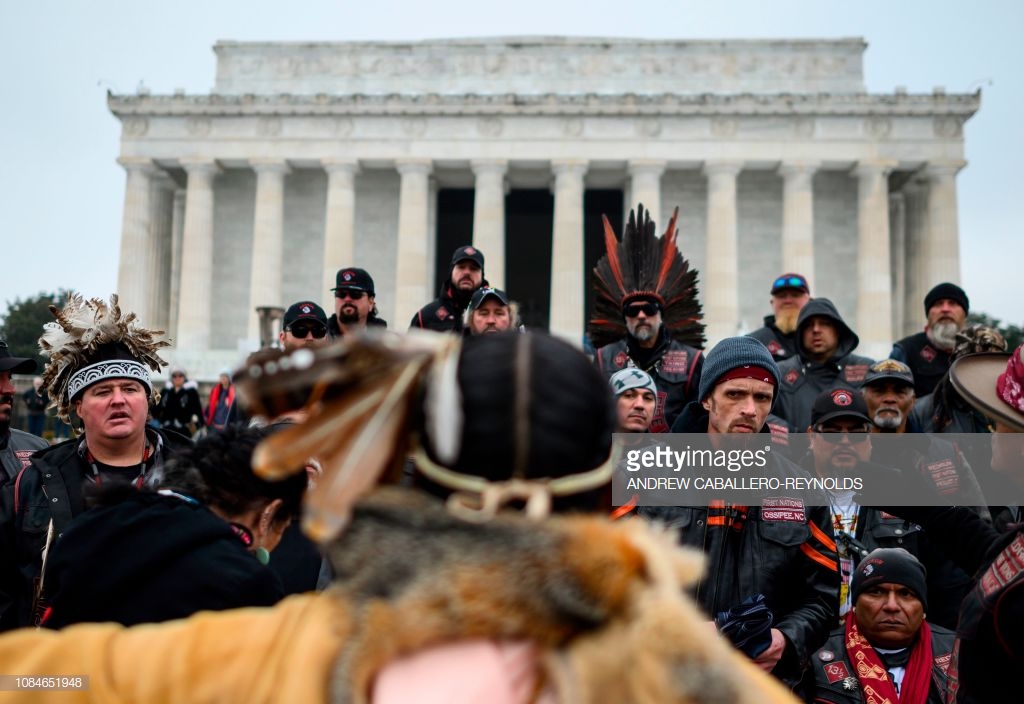 By the time the editors and reporters showed up, they worked, quite helpfully, to generate “tick-tock” timelines. By establishing the beginning of the story, there would be a middle and then an end. Only this story, like so many, resisted tidy narrative packaging.

The timelines started getting tangled with each other, catching flak from an audience that felt closer to the primary source; from people who had seen the “whole” video, (which was over an hour long and painfully boring and repetitive in parts).

As each timeline emerged, it seemed to offer a correction to an earlier version that muddied the moral of the story in its rush to judgement (the chronic predicament of journalism overall, which is in the business of producing the first, not last, draft of history).

Here’s the introduction that BuzzFeed offered on its chronology:

“Nick Sandmann, a junior at Kentucky’s Covington Catholic High, denounced what he called ‘outright lies’ about his conduct toward attendees at the Indigenous Peoples March.”

The Daily Caller headlined its timeline in angry bold, all-capital letters: “YOUR COMPLETE GUIDE TO HOW THE MEDIA TRIED RUINING THE LIVES OF INNOCENT TEENAGERS.”

One of the most comprehensive retroactive timelines was put together by Indian Country Today. Its series of clips take you through a procession of taunting, heckling and baiting scenes. Scrolling through produces the sense of a nightmarish piece of Cinéma vérité.

Scenes of young men jumping up and down, chanting school fight songs in unison and egging each other on, teeter on a boundary between juvenile and terrifying, inducing something like the feeling of reading or watching “Lord of the Flies.” It all took place, apparently, at the steps of the Lincoln Memorial.

The story began as a video clip. The first words heard, in reaction to what had happened, came from Nathan Phillips, who is widely described as an Omaha elder and Vietnam-era veteran.

“These are indigenous lands, we never had walls,” Phillips said.

There was lamentation in his tone.

A Reuters story echoed the remark in its headline: “ ‘These Are Indigenous Lands, We’re Not Supposed to Have Walls,’ Says Native Elder Nathan Phillips.”

But the article, while headlining the remark, did not seem to know what to do it with it after that. The comment was treated as something that spoke for itself, with nothing further to say or ask; a conversation stopper. Aside from the headline, the story went on to report that Covington High School and and the Diocese of Covington had condemned the actions of the students “towards Nathan Phillips specifically, and Native Americans in general.”

By Monday, the incident had spread across the ocean. By then Britain’s Daily Mail had turned it into the kind of divisive, polarizing story of sufficient standing to attract a celebrity. The headline it ran was this: “Alyssa Milano is slammed for saying MAGA hats are ‘the new white hood’ after watching viral video of Trump-supporting teenagers taunting Native American veteran.”

Looking like Nick Sandman & Covington Catholic students were treated unfairly with early judgements proving out to be false – smeared by media. Not good, but making big comeback! “New footage shows that media was wrong about teen’s encounter with Native American” @TuckerCarlson

Sandmann, the high school student, claims that, contrary to the impression created by the video clip, he was not invading Phillips’ space. He says Phillips locked eyes with him and moved in his direction, and that he merely stood his ground.

Phillips, on the other hand, told CNN that yes, he did move towards the students, intent on defusing tensions that had been building between them and an altogether different group that has been described as affiliated with the Black Hebrew Israelite movement. But then Sandmann blocked his way. “If I moved I would be in his presence, in his space,” Phillips said.

Whatever else had been going on, the issue of space and territory was always pertinent. It was visible from the start, in the awkward juxtaposition of the faces of the two men. If nothing else was clear, everyone could agree they were too close for comfort.

‘These Are Indigenous Lands’ 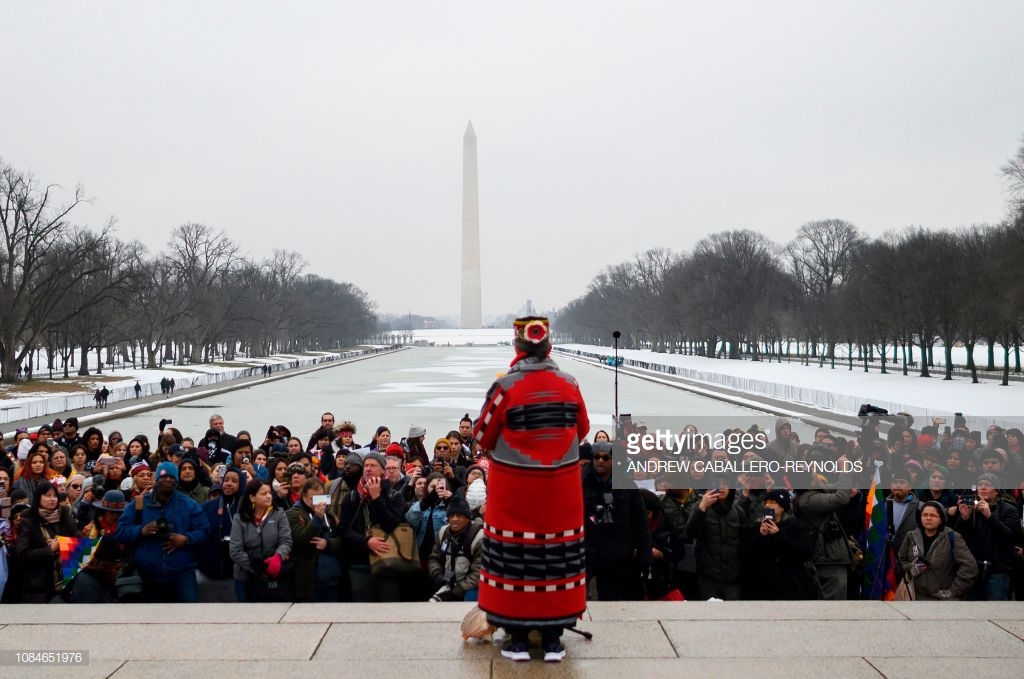 A woman speaks during the Indigenous People’s March on the National Mall at the Lincoln Memorial in Washington, DC, on January 18, 2019. (ANDREW CABALLERO-REYNOLDS/AFP/Getty Images)

When Phillips said “these are indigenous lands” he was not strident or militant. His tone was low keyed, as though expressing a common and obvious truth. It’s easy to understand why reporters chasing a dragon of a story, didn’t dwell on it.

But the comment is worth going back to for insight into what makes the incident incendiary.

An echo of Phillips’ “indigenous land” comment can be found in an online tool that some people share with each other, as a matter of curiosity, or in some cases, by teachers, who might use it as a piece of curriculum.

Open the Native Land link in your browser and you instantly contemplate a rendering of the North American continent covered in overlapping blankets of color, each one representing a different group of traditional inhabitants. You can put in your address or zip code to see what tribe lived where your house now stands.

Search “Washington, D.C.,” where the Phillips-Sandmann incident just took place and you will get a better sense of what Phillips meant when he said “this is indigenous land.”

“You are in the land of the Pamunkey and Piscataway,” the search engine tells you.

The message does not say “you are in the ‘former’ land of the Pamunkey and Piscataway.” It speaks in the present tense.

Looking up your own city or town causes an eerie sense of displacement. You thought you knew where you lived. You thought your own address, at least, was a fact about which you could be confident. But someone else, you learn, considers it intrinsic to their ancestry. You suddenly sense yourself as an interloper, someone from somewhere else. An invader.

Along with the seizure of their territory, indigenous Americans cope with a dolorous loss of continuity and context, through genocides; generations of injustice. More of this is known and discussed than years ago. But there has been no truth and reconciliation, no healing or compensation.

Centuries after Spanish and Portuguese explorers arrived in the “New World,” assured of their right to all that they could seize under the “Doctrine of Discovery,” the question of whose land this is, remains deeply unsettled.

The American novelist William Faulkner said: “The past isn’t dead. It’s not even past.” That’s particularly true, of course, when great wrongs are left unattended. They don’t tend to go away. Instead they smolder. And from time to time, they blow up out of seemingly nowhere.

Corinna Barnard is a writer and freelance editor for Consortium News who has worked as a news editor for Dow Jones Newswires, WSJ.com, The Wall Street Journal and Women’s eNews.