On Thursday BuzzFeedNews delivered the latest “bombshell” Russia-gate report to fizzle within 24 hours of its publication, one in a long series of wrong Russia-gate stories that have the media begging for forgiveness, says Caitlin Johnstone.

Following what The Washington Post has described as “the highest-profile misstep yet for a news organization during a period of heightened and intense scrutiny of the press,” mass media representatives are now flailing desperately for an argument as to why people should continue to place their trust in mainstream news outlets.

On Thursday BuzzFeedNews delivered the latest “bombshell” Russiagate report to fizzle within 24 hours of its publication, a pattern that is now so consistent that I’ve personally made a practice of declining to comment on such stories until a day or two after their release. “BOOM!” tweets were issued by #Resistance pundits on Twitter, “If true this means X, Y and Z” bloviations were made on mass media punditry panels, and for about 20 hours Russiagaters everywhere were riding the high of their lives, giddy with the news that President Trump had committed an impeachable felony by ordering Michael Cohen to lie to Congress about a proposed Trump office tower in Moscow, a proposal which died within weeks and the Kremlin never touched.

There was reason enough already for any reasonable person to refrain from frenzied celebration, including the fact that the story’s two authors, Jason Leopold and Anthony Cormier, were giving the press two very different accounts of the information they’d based it on, with Cormier telling CNN that he had not personally seen the evidence underlying his report and Leopold telling MSNBC that he had. Both Leopold and Cormier, for the record, have already previously suffered a Russiagate faceplant with the clickbait viral story that Russia had financed the 2016 election, burying the fact that it was a Russian election. 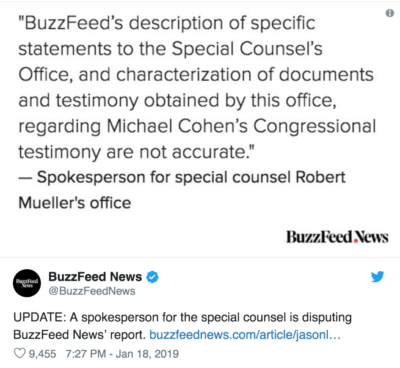 Then the entire story came crashing down when Mueller’s office took the extremely rare step of issuing an unequivocal statement that the Buzzfeed story was wrong, writing simply, “BuzzFeed’s description of specific statements to the special counsel’s office, and characterization of documents and testimony obtained by this office, regarding Michael Cohen’s congressional testimony are not accurate.”

According to journalist and economic analyst Doug Henwood, the print New York Times covered the BuzzFeedNews report on its front page when the story broke, but the report on Mueller’s correction the next day was shoved back to page 11. This appalling journalistic malpractice makes it very funny that the NYT’s Wajahat Ali had the gall to tweet, “Unlike the Trump administration, journalists are fact checking and willing to correct the record if the Buzzfeed story is found inaccurate. Not really the actions of a deep state and enemy of the people, right?”

This is the behavior of a media class that is interested in selling narratives, not reporting truth. And yet the mass media talking heads are all telling us today that we must continue to trust them.

“Those trying to tar all media today aren’t interested in improving journalism but protecting themselves,” tweeted NBC’s Chuck Todd. “There’s a lot more accountability in media these days than in our politics. We know we live in a glass house, we hope the folks we cover are as self aware.”

More accountability in media than in politics, Chuck? Really? Accountability to whom? Your advertisers? Your plutocratic owners? Certainly not to the people whose minds you are paid exorbitant sums to influence; there are no public elections for the leadership of the mass media.

“The larger message that a lot of people are going to take from this story is that the news media are a bunch of leftist liars who are dying to get the president, and they’re willing to lie to do it, and I don’t think that’s true” said Jeffrey Toobin on a CNN panel, adding “I just think this is a bad day for us.” 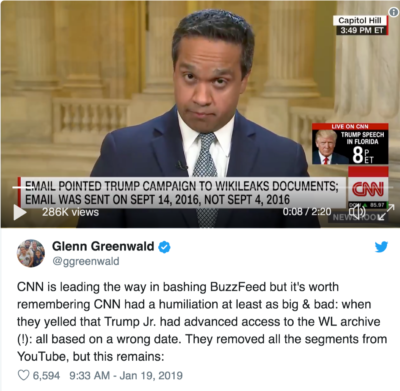 “It does reinforce bad stereotypes about the news media,” said Brian Stelter on the same CNN panel. “I am desperate as a media reporter to always say to the audience, judge folks individually and judge brands individually. Don’t fall for what these politicians out there want you to do. They want you to think we’re all crooked. We’re not. But Buzzfeed now, now the onus is on Buzzfeed.”

CNN, for the record, has been guilty of an arguably even more embarrassing Russiagate flub than BuzzFeedNews’s when they wrongly reported that Donald Trump Jr had had access to WikiLeaks’ DNC email archives prior to their 2016 publication, an error that was hilariously due to to the simple misreading of an email date by multiple people.

The mass media, including pro-Trump mass media like Fox News, absolutely deserves to be distrusted. It has earned that distrust. It had earned that distrust already with its constant promotion of imperialist wars and an oligarch-friendly status quo, and it has earned it even more with its frenzied promotion of a narrative engineered to manufacture consent for a preexisting agenda to shove Russia off the world stage.

The mainstream media absolutely is the enemy of the people; just because Trump says it doesn’t mean it’s not true. The only reason people don’t rise up and use the power of their numbers to force the much-needed changes that need to happen in our world is because they are being propagandized to accept the status quo day in and day out by the mass media’s endless cultural engineering project. They are the reason why wars go unopposed, why third parties never gain traction, why people consent to money hemorrhaging upward to the wealthiest of the wealthy while everyone else struggles to survive. The sooner people wake up from the perverse narrative matrix of the plutocratic media, the better.

42 comments for “MSM Begs For Trust After BuzzFeedNews Debacle”