The prime minister who lost his bluff with international creditors in 2015 is now striking another radical pose by giving holidays to assassins, writes John Kiriakou.

Tsipras Has Betrayed the Greek People

The Greek word “syriza” means radical or from the grass roots.  That, however, does not describe the man who leads Syriza, Greece’s ruling party of the same name.

Prime Minister Alexis Tsipras mishandled the dramatic standoff with the EU and international creditors three years ago. He is now meddling with the country’s anti-terrorism laws concerning the Revolutionary Organization 17 November, a far-left group formed in 1975 that has carried out numerous assassinations.

I am not unbiased on this issue.  I was a CIA officer in Athens from 1998-2000 working against 17 November, which has killed 23 people, including foreign diplomats, a Greek publisher of a right-wing newspaper, a member of parliament, a CIA station chief in Athens, two U.S. defense attaches, and a U.S. Air Force sergeant.

I left Greece abruptly in August 2000 after 17 November assassinated my neighbor, British Defense Attache Stephen Saunders.  The group said in a subsequent communique that they had set out to kill me that morning, but they saw that I was driving an armored car and they knew that I was armed.  I was evacuated two hours after the communique was published. 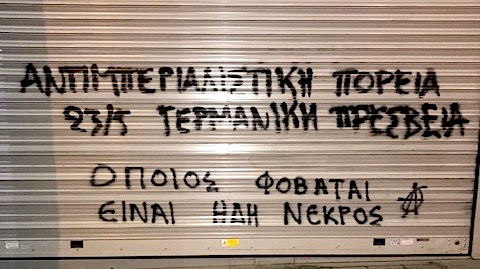 Under Tsipras’ reforms, any prisoner who has significant physical disabilities and who is serving a life sentence may be released unconditionally.  That law affects only one person, Savvas Xiros, the 17 November assassin whose bomb went off in his hands as he was positioning it to kill a shipowner in the port city of Pireaus.  Xiros lost his hands and an eye.  He thought he would die from his injuries, so he confessed everything to the police.  Then he lived. So far he’s still in prison.

Another provision gave furloughs to all of the 17 November terrorists serving life terms for murder, including the group’s founder Alexandros Yiotopoulos and its two lead assassins, Christodoulos Xiros and Dimitris Koufondinas. They are all serving terms of more than 1,600 years each.  Two years ago, while on a two-week Christmas furlough, Christodoulos Xiros simply walked free. He was caught a year later.  But instead of being punished with a longer sentence, he is scheduled for another furlough this Christmas.

After becoming prime minister in January 2015, Tsipras, then 44, almost immediately began hinting that Greece would exit the Eurozone and return to the drachma as its national currency unless the “evil troika”— the European Central Bank, the World Bank and the International Monetary Fund—eased demands to slash government spending, primarily on pensions.

He sent his finance minister at the time, Giannis Varoufakis, who is now working with Sen. Bernie Sanders to form an international progressive movement, to Berlin and London to hold the Greek position as forcefully as possible. Varoufakis did as he was asked. He made it clear that Syriza was willing to leave the European Union and default on its loans to defend Greek citizens from hardship. His comments rattled foreign exchange markets and weakened the euro against the dollar. 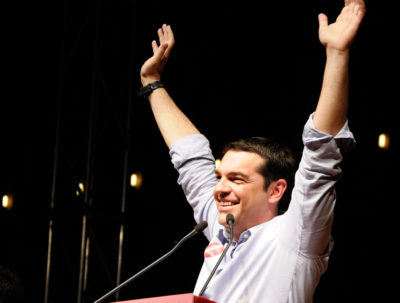 As part of these hardline and high-stakes negotiation, Greece missed a payment deadline of its international creditors by 24 hours, further escalating tensions. Tsipras then pulled an infamous publicity stunt. He called for a national referendum on withdrawing from the Eurozone, calculating that it would fail. He had no intention of dropping the euro and returning to the drachma. But voters approved the referendum.

Varoufakis, who is a personal friend, told me that he was with the prime minister the night of the referendum. When it was clear it would pass, he said, Tsipras looked at him and said, “Shit.  We’re going to actually win this.”

Tsipras decided to ignore the voters. Instead of fulfilling his party’s essential, opening promise—to resist demands for massive budget cuts and layoffs from the public sector for Greece—Tsipras capitulated.

Tsipras also threw Varoufakis to the wolves. Varoufakis was forced to resign and the country’s chief prosecutor wound up charging him with “undermining the national currency” by weakening the euro against the dollar with his threat to withdraw from the Eurozone in meetings with the Germans.

Varoufakis was arraigned on a charge of treason and still faces trial, although he may not see the inside of a courtroom for another 20 years.  That’s the Greek justice system, where treason cases typically drag on for decades and then fizzle out. The last treason conviction was in the 1970s, when the leaders of the 1967-74 military junta were convicted and sentenced to life in prison.  They all died there.

In the years since Greece’s drastic face-off with the EU, unemployment has fallen to 19 percent from 30 percent to.  Tourism is way up.  And the country is no longer on the brink of insolvency. But none of that has anything to do with the Syriza Party, its platform or its leader. The economy is turning around because it has finally found a natural equilibrium, albeit at a much-reduced size from before the crisis, and in spite of Syriza’s policies.

Syriza is a comparatively new party in Greece, founded in 2001 after the socialist PASOK party collapsed under the weight of its own corruption.  It’s a coalition of stragglers from PASOK and five small Eurocommunist parties.  Its platform is socialist and nationalist at the same time:  oppose neoliberal economic policies, protect Greek workers, clean up the environment, provide for the elderly, maintain good relations with neighbors, oppose counterterrorism laws and welcome refugees.

But in accordance with the EU’s bailout conditions, Tsipras wound up firing thousands of government workers, taking 10,000 priests off the government payroll and selling state monopolies to foreign investors. Thousands of Greeks either lost their pensions or had them slashed. For the first time in generations, many Greeks went hungry and became homeless. 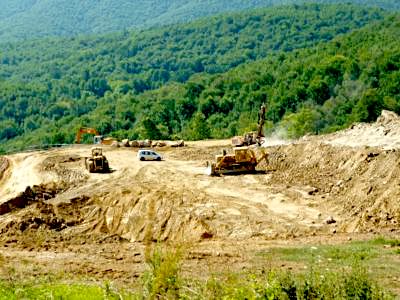 Another notable failure of Tsipras concerns the Skouries mine in northern Greece, which is operated by the Canadian Eldorado Gold Corporation. Greece is a rather important producer of gold, but Eldorado’s operation has stirred intense demonstrations to protect the local water supply. Stridently anti-Eldorado graffiti in the northern part of the country expresses some of the local outrage. Instead of taking over the mine, cleaning it up, and selling mining rights to any number of “green” gold mining companies, Tsipras did nothing.  As a result, miners went on strike last year and the company has announced layoffs.

On the heels of these failures, Tsipras looked for ways to recover his credentials as a “democratic socialist,” bringing him to his current debacle.

Tsipras’s predecessors, prime ministers from both the conservative New Democracy and socialist PASOK parties, all asked U.S., British and Israeli intelligence services for help against 17 November. Flouting that precedent, Tsipras decided to weakened the country’s anti-terrorism laws. Since many of these laws were pushed by the United States, he saw it as a way to set himself apart from Greek conservatives.

I’ve been a Greek citizen since 2008. The Tsipras government hired me to help it write a new whistleblower protection law, enacted in April.  But Tsipras has turned his back on democratic socialism.  He’s turned his back on the poor, the elderly, the environment, and even the victims of terrorism for no good reason.  Tsipras has set back his professed democratic socialism by a generation.