In South Lebanon, the Museum for Resistance, also known as the Mlita Museum, for the town in which it is located, is a wildly popular tourist attraction and a place where you can run into Arabs visiting from around the region.

In it, Hizbullah—the political party with an armed wing that, with Iranian assistance, emerged in response to the Israeli invasion of 1982—celebrates its military successes, displaying weapons captured from the occupation army and replicas of some of its military tunnels.

The museum enshrines an important realization for the country: that while conventional Arab armies failed to deter Israeli invasions, Lebanese and Palestinian volunteers succeeded in holding the mighty Israeli army at bay and have become the real defenders against Israeli attacks and occupation.  As such, the museum offers testimony to the current nature of the Arab-Israeli conflict.  The U.S. and other Western powers want to disarm Hizbullah while denying the Lebanese Army the weapons to deter Israel.  In other words, they want to return Lebanon to its former state of weakness.

The problems this situation poses for Israel are often overlooked given its apparently clear strategic advantage. 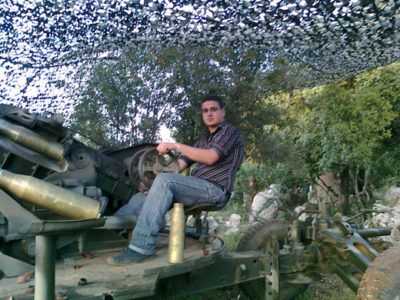 Israel’s arsenal of weapons of mass destruction is still being protected by Western countries from scrutiny or even criticism. The Obama administration guaranteed Israel a most generous financial assistance program for the next decade. Israeli’s 100-percent occupation of Palestine remains immune from U.N. or other international condemnation. Israeli citizens’ settlement building in Palestine territories—despite violating international law—has not caused a rift between Israel and either the European Union or the U.S.

Egypt, meanwhile, remains committed to the peace treaty with Israel and to security coordination with the occupation state, as does Jordan.   And Israel does not fear an assault from any Arab state or a combination of Arab states. (Arab threats—largely rhetorical—have only been intended to pacify popular anger.)

But things are not as secure for Israel as they might seem.

A century after the Balfour Declaration, the Arab-Israeli conflict has not ended.  Early Zionist thinkers and leaders—influenced by racist European attitudes about the natives—never considered that the Palestinians would continue to resist Zionism for so long. This in itself is a big failure for Zionism as it defies the long-held belief that force is the only language that Arabs understand. At the same time, economic offers and political ploys have not deceived the Palestinians—or Arabs—into accepting the Israeli occupation project either.

The resistance is not only tenacious, its effectiveness reached a new level in 2000. That year, after an escalating pattern of resistance operations that began in 1982—first by secular (communist and Syrian nationalist) groups and later by Hizbullah—the Israeli occupation army was forced to withdraw from South Lebanon.

Israel’s biggest strategic loss came in 2006 during the Lebanese-Israeli War, when armed groups (not part of an Arab conventional army) resisted Israeli assaults and deterred a ground offensive against Arab territory. Unless you have studied the performance of the Palestine Liberation Organization in Lebanon between 1970 and 1982, it’s difficult to fathom how seriously this changed the power calculus of Lebanese and Palestinian resistance groups vis-à-vis Israel.

But the significance of that war—and most importantly on Arab perceptions of it—was obscured by Saudi regime propaganda intent on undermining the standing of any resistance, leftist or Islamist, Sunni or Shi`ite.  The House of Saud began to promote sectarian hatred and agitation and emphasize the losses for the Arab side to downplay the precedent set by the war.  (Examples of this are so pervasive it would be unfair to single out any one broadcaster or publication.)

During the invasions of Gaza, Israel failed again to advance or even to prevent primitive Hamas rockets from firing; all claims to the (fake) successes of the Iron Dome air defense system notwithstanding.

This is a marked contrast to previous confrontations. In 1978, Israel invaded Lebanon and the PLO’s resistance was disorganized and largely spontaneous.  Four years later, in the face of the 1982 massive Israel invasion, the PLO failed again to formulate a joint resistance plan. Fighting was stiff in some cases, such as at the refugee camp`Ayn Al-Hilwi and the medieval-era Beuafort castle. And later at Khaldah, on the outskirts of Beirut, the PLO did implement a defense plan for Beirut (designed by West Point graduate Abu Al-Walid), which explains why Israel never dared to invade West Beirut until after the evacuation of PLO forces from Lebanon. Overall, however, the PLO resistance record pales in comparison to that of Hamas and Hizbullah, in Gaza and South Lebanon, respectively.

Israeli strategy in dealing with the Arabs was based on massive, indiscriminate use of force and the promotion of the Israeli soldier as invincible and terrifying. This produced a psychological advantage that, from 1948 to 1967, sowed fear and resignation.

More recently, however, the image of the mighty Israeli soldier and a fearful Arab resistance has been reversed.  In the 2006 war, Israeli soldiers in South Lebanon were terrified by Hizbullah fighters who prevented the enemy army from advancing one inch into Lebanese territory.  I grew up in Lebanon in the 1960s and 1970s, when Israel used to bomb and invade at will. This no longer happens because Israel has come to fear Hizbullah.

Another problem for Israel is its once-vaunted intelligence, which has developed a reputation for clumsiness. The failed raid in Gaza (by an elite unit of the Israeli occupation army) is the most recent example. In 2010, Dubai police plastered the faces of top agents of Mossad, the intelligence agency, around the world in the wake of the assassination of Mahmoud Al-Mabhouh, a co-founder of the military wing of Hamas. Before that, in 1997, there was the botched assassination attempt on Khalid Misha`l’, the Doha-based former leader of Hamas, by Mossad agents.

In the 2006 war with Lebanon, Israel’s intelligence failures included the famous and (almost) comical kidnapping of a poor man whose only crime was that his name was Hasan Nasrallah, the same as that of the Hizbullah leader. Presumably, Mossad experts on the Arab world assumed there was only one Hasan Nasrallah in all of Lebanon.

Hizbullah and Hamas, meanwhile, have run intelligence operations that the PLO has rarely ever matched. Hizbullah’s 2012 kidnapping of Israeli soldiers is an example of careful preparations and reliable intelligence.  Hizbullah and Hamas have special operatives monitoring the communications of the Israeli military.  Hizbullah has its own Hebrew language school. PLO organizations, by contrast, had so few Hebrew speakers they often had to rely on Hebrew teachers from the Institute of Palestine Studies in Beirut to translate important documents.

The Arab-Israeli conflict is not about to end anytime soon.  Trump’s “Deal of the Century” hinges on the belief that Saudi Arabia’s Mohammad bin Salman can convince the Palestinians to give up their cause.  This is a conflict that is unlikely to end in compromise, and the Israeli occupation state has made it clear that historical Palestine belongs to the Jewish people and that the Palestinians represent a mere nuisance on the land.