The claims made by Luke Harding and The Guardian that Assange met Manafort will never be proven true, and they know it. And we should never let them forget it, says Caitlin Johnstone.

For the first few hours after any new “bombshell” Russia-gate story comes out, my social media notifications always light up with poorly written posts by liberal establishment loyalists saying things like “HAHAHA @caitoz this proves you wrong now will you FINALLY stop denying Russian collusion???” Then, when people start actually analyzing that story and noting that it comes nowhere remotely close to proving that Donald Trump colluded with the Russian government to steal the 2016 election, those same people always forget to come back afterward and admit to me that they were wrong again.

This happens every single time, including this past Tuesday when The Guardian published a new “bombshell” report saying that former Trump campaign manager Paul Manafort had had secret meetings with WikiLeaks founder Julian Assange. When experts all across the political spectrum began pointing out that the story contained no evidence for its nonsensical claims and was entirely anonymously sourced, nobody ever came back and said “Hey sorry for calling you a Russian propagandist, Caitlin; turns out that story wasn’t as fact-based as I’d thought!” When evidence for a single one of the article’s claims failed to turn up for a day, then two days, then three days, nobody came back and said “Gosh Caitlin, I owe you an apology for mocking you and calling you Assange’s bitch; turns out WikiLeaks and Manafort are suing that publication and its claims remain completely unproven.”

And of course they didn’t. They weren’t meant to. They were meant to absorb The Guardian’s false claims as fact, add it to their Gish gallop mountain of false evidence for Trump-Russia-WikiLeaks collusion, and then be shuffled onward by the relentless news churn of the corporate propaganda matrix like always. But I’m never going to let them forget that this happened, and neither should you. 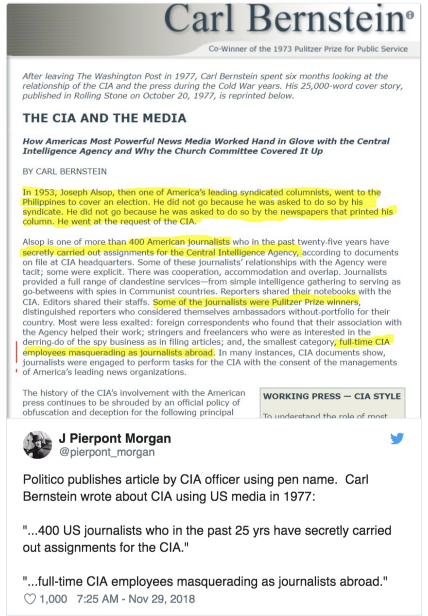 If it wasn’t obvious to you last week that there is an unelected power establishment which needs above all else to control the public narrative about what’s going on in the world, it should certainly be obvious to you this week. The Guardian hit piece was so spectacularly desperate in its over-reaching to advance a narrative which has been used to manufacture support for longtime CIA/MI6 agendas like arresting Julian Assange, stopping WikiLeaks, censoring the internet and subverting Russia that it completely exposed itself as the establishment psyop firm that it is.

If that wasn’t evidence enough, in the wake of the Guardian controversy, Politico took the downright shocking step of allowing an anonymous former CIA officer to publish a lie-filled article speculating, on no evidence whatsoever, that if the story proves untrue it will be because false information was fed to the Guardian by Russia-linked operatives. The article’s anonymous author claims that there are exactly two main possibilities here: (1) that the article is 100% true and will be vindicated, or (2) that the article is based on disinformation which was planted in “an attempt to make [Guardian author Luke] Harding look bad.”

This is obviously absurd for two reasons. The first reason is because no Kremlin operative could possibly make Luke Harding look worse than Luke Harding already did in his pathetic, fumbling attempts to argue his case for collusion while promoting his book Collusion to a less-than-sycophantic interviewer in December of last year, in which Harding grew frustrated and hung up on his own interview. The second reason is that there is another far more likely possibility than the two offered by Politico’s anonymous spook.

Former Guardian employee Jonathan Cook explains that from what he learned while working at the outlet, the most likely explanation is that the editors permitted the article to be published because its anonymous sources came from within an intelligence or defense agency. As we’ve seen time and time again, from the Iraq WMD narrative to the Russian hacking narrative, western mass media outlets have a ubiquitous standing policy of printing assertions by opaque, dishonest, unaccountable government agencies as objective fact. When asked why she unquestioningly printed a false assertion that real social media users who deny any connection to Russia were Russian “bots”, the Guardian’s own political editor Heather Stewart unapologetically stated, “It’s not my analysis?—?as the piece makes quite clear?—?it’s the government’s.” As long as it comes from the government, the mass media stenographers will print what they’re told to print. But tell me more about how awful RT is because it’s “state media”.

“I worked for The Guardian for a number of years, and know well the layers of checks that any highly sensitive story has to go through before publication. In that lengthy process, a variety of commissioning editors, lawyers, backbench editors and the editor herself, Kath Viner, would normally insist on cuts to anything that could not be rigorously defended and corroborated.

“And yet this piece seems to have been casually waved through, given a green light even though its profound shortcomings were evident to a range of well-placed analysts and journalists from the outset.

“That at the very least hints that the Guardian thought they had ‘insurance’ on this story. And the only people who could have promised that kind of insurance are the security and intelligence services?—?presumably of Britain, the United States and / or Ecuador.

“It appears the Guardian has simply taken this story, provided by spooks, at face value.”

A Glimpse Behind the Curtain 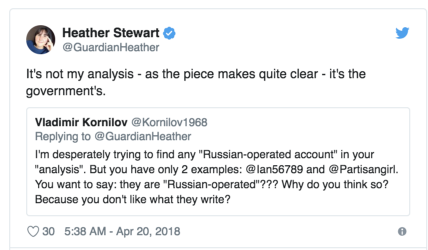 The claims made by Luke Harding and The Guardian will never be proven true, and they know it. They knowingly printed claims that they were one hundred percent aware they’d never be able to provide proof of, and the clicks their viral story generated rewarded them with a shower of cash. Their fake story was then passed along by news outlets everywhere, including an MSNBC panel which hilariously kept informing its readers that if this Guardian report is confirmed it would be the first ever actual evidence linking Trump to WikiLeaks in a meaningful way.

We must never forget that this was done. We must keep bringing up the undeniable fact that  The Guardian published false claims about a longtime target of western intelligence and defense agencies, then was backed up by a longtime insider from one of those agencies who was permitted to publish anonymously in an ostensibly unrelated outlet. This is one of those jaw-dropping glimpses behind the puppet stage we must never permit the world to forget, much like the time CNN knowingly staged a fake interview with a Syrian girl reciting scripted war propaganda. We must keep bringing this up at every opportunity in our efforts to give people glimpses behind the propaganda curtain, continuing to remind them next week, next month, next year, and ten years from now.

Forgiveness is overrated. Forgiveness is a key foundational element in most abusive relationships, wherein the abusee is manipulated or bullied into forgiving the abuser again and again, without ever holding a grudge. This is true of a battered spouse, and it is true of an oppressed populace. The ability to hold a grudge is therefore of paramount importance in fighting the propaganda machine on which our rulers have built their oppressive empire. Otherwise we will be shuffled forward in the news churn, just like the goldfish-brained Russia-gaters who are moved along from one false story to the next into the amnesia of the endlessly spewing news churn.

Don’t forget. Remember this one. Remember it, and keep bringing it up.

This article originally appeared on caitlinjohnstone.com

← Israel’s Overlooked Strategic Losses in Wars Against Arabs
George H.W. Bush, the CIA and a Case of State-Sponsored Terrorism →

45 comments for “The Guardian/Politico Psyop Against WikiLeaks”