U.S.-Saudi ties have withstood crises in the past and will withstand this one, says As’ad AbuKhalil.

Washington and Riyadh Have Had Worse

Crises and Will Survive Khashoggi Murder

Nobody in Washington, Republican or Democrat, welcomes the crisis in U.S.–Saudi relations prompted by the murder in Istanbul of Jamal Khashoggi, a Saudi defector, on October 2. Maintaining good relations with the Saudi royal family has been a high bipartisan priority since President Franklin D. Roosevelt and King  Abdul Aziz ibn Saud made their Faustian bargain in 1945:  The U.S. would shield the Saudi kingdom’s tyranny from criticism in exchange for a share of oil revenues and Riyadh’s political loyalty (and American arms sales).

The relationship has continued this way in the decades since—and will still do so. The U.S. has covered up a long history of Saudi crimes and conspiracies; during the Cold War it used the Saudis to spread extremist jihadi ideologies to counter secular Arabs that tilted towards Moscow. More recently, the Saudi regime was not freelancing when it cultivated the likes of Osama bin Laden: He was part of a Saudi-U.S.-Pakistani effort to recruit, arm, and finance fanatical Muslims from around the world to undermine the progressive secular regime in Afghanistan.

If history is any guide, it is highly likely that Washington and Riyadh are collaborating behind the scenes to cover up the truth of the Khashoggi case and preserve the relationship as it has been for the past 85 years.

Beside the current crisis, there have been other dust-ups in the history of U.S.-Saudi relations. The 1973 oil crisis was the most serious, and it nearly undermined the alliance.  Back then the Saudi regime couldn’t ignore the rising tide of Arab sentiment against U.S. intervention on the side of Israel in the 1973 war.

King Faisal was adamant in discussions with Henry Kissinger, Nixon’s secretary of state and national security adviser, that Israel should withdraw from occupied Arab territories in return for lifting the oil embargo. Contrary to his public statements, Faisal hadn’t rejected Israel’s occupation of Palestine since the 1948 war.  Reflecting in part the king’s deep anti-Semitism, Faisal only refused to recognize Jewish religious rights in Jerusalem. 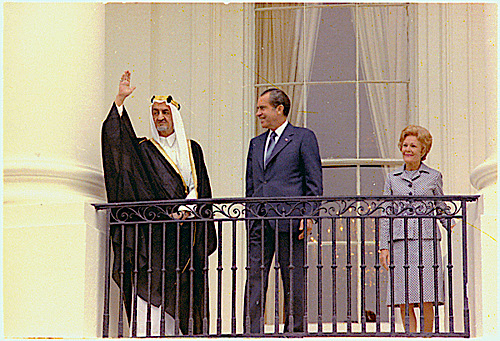 When reminded of the significance of the Wailing Wall (Buraq Wall for Muslims), he recommended construction of a new wall where Jews “could weep.” But Faisal’s firm stance didn’t last long: New U.S. arms sales were enough to make him abandon his insistence that Israeli withdrawal from the occupied territories was a necessary condition for the restoration of oil sales to the West.

Another crisis arose with the broadcast of the movie “Death of a Princess” in 1980. The British-made film was based on a true story about the beheading of a Saudi princess who fell in love with a commoner. After the movie was shown in Britain, the Saudi government did not want U.S. television stations to broadcast it. The American oil lobby put enormous pressure on PBS stations around the country not to air it. Very few stations did, and the bilateral relationship was secured.

There were other crises in the relationship in the 1980s between the Saudi government and Congress: Under pressure from the American Israel Public Affairs Committee, Congress opposed arms sales to Saudi Arabia, even as administrations (Democratic and Republican) favored them. AIPAC dropped its objections to weapons sales after the 1990 Iraqi invasion of Kuwait and the establishment of secret contacts between Israel and Gulf countries.

This is the background from which to view the current, relatively minor crisis in comparison. The Khasshogi killing wouldn’t have amounted to much if the U.S. mainstream media didn’t make a strong case against the Saudi royal family (while suddenly discovering the Saudis’ war on Yemen), and if the Turkish government hadn’t leaked so many gruesome details about the murder in the Saudi’s Istanbul consulate.

The Trump administration—in line with successive U.S. administrations–—first tried to minimize the significance of the crime.  President Donald Trump typically reminded Americans of the value of arms sales to the Saudi kingdom. But his subsequent statements were inconsistent: First he’d mention $10 billion in arms sales and then he’d promise to sanction the regime. He even uncharacteristically, for a U.S. president, pledged to let Congress decide on sanctions once an investigation is completed. (Which of several investigations he didn’t say.)

It’s not a stretch to believe the Trump administration has been working covertly with the Saudis to come up with a coverup story. The Saudi’s multiple explanations have been unconvincing from the start. The intent of CIA Director Gina Haspel’s trip to Istanbul seemed to be to shield the Saudi regime from the murder and Crown Prince Muhammad bin Salman’s involvement. Haspel may have been behind Turkish President Recip Tayyip Erdogan’s surprising reluctance to reveal “the naked truth,” as he’d promised.

The U.S. almost certainly wanted the Turkish government’s raw intelligence to better advise the Saudis on the coverup. After Haspel’s meeting with Trump upon her return the Saudis admitted it was premeditated murder.

The U.S. likely mediated between Erdogan and MbS, given the animosity between the Turks and Saudis. Outlines of a deal are emerging. The Saudis now refer to their former occupiers as “sisterly Turkey,” though bin Salmon previously included it in the region’s “axis of evil.” Official Saudi rhetoric has also changed towards Qatar, which the Saudis and their allies have blockaded since last year. MbS and Adel Jubeir, his foreign minister, have made conciliatory statements about Doha in the last few days, something unthinkable a month ago.

Western and Turkish media keeps the Khassoghi story alive. But AIPAC, UAE and Israeli pressure has been exerted on the U.S. not to abandon bin Salman. For Israel, he is the opportunity of a lifetime: a rising Saudi prince in line to be king who is unburdened by political or religious attachment to ditch the Palestinians and continue his hostility toward Iran.

It is to Washington’s advantage that MbS has been weakened. He might now abandon his proclivity for adventurism and become a more traditional Saudi despot deferring to DC on key decisions. But that should make him also be more cautious about confronting Iran and endorsing Trump’s “deal of the century” for the Palestinians. The U.S. is still capable, though, of maneuvering to replace him if he becomes no longer useful, despite Saudi threats to align itself with China and Russia, or quit its embrace of Israel.

The relationship between the U.S. and Saudi Arabia has survived previous crises. It will survive this one.

← Despite Saudi Crisis, US Increases Threats Against Iran
The West is Failing Julian Assange →

71 comments for “The Saudi-US Crisis Will Pass”