Though the U.S.-Saudi alliance may have been weakened because of the Khashoggi murder, both countries are still targeting Iran as new US sanctions are announced on Sunday, writes Marjorie Cohn of Truthout.

The alleged torture, murder and dismemberment of journalist Jamal Khashoggi, widely believed to have been carried out on orders of Saudi Crown Prince Mohammed bin Salman, may put a crimp in Donald Trump’s plans to escalate his aggression against Iran.

Saudi Arabia, the United States and Israel are unified in their hatred of Iran, albeit with different motives. Iran has been in the crosshairs of the United States since the 1979 Iranian Revolution overthrew the vicious, US-installed puppet Mohammad Reza Shah Pahlavi; indeed, in 2002, George W. Bush initiated Iran into his “axis of evil.” Saudi Arabia, home to the two holiest Muslim sites, sees Shiite Iran as a rival for regional hegemony. And Israel considers Iran an “existential threat.”

“Trump administration officials and outside experts said that possible repercussions on an elaborate plan to squeeze the Iranians have dominated internal discussions about the fallout over what happened to Mr. Khashoggi,” David Sanger reported in The New York Times.

The allegations against the Saudi crown prince “have already had an effect” on Israel, “effectively freezing the push to build an international coalition against Iran’s regional influence, the top priority for Prime Minister Benjamin Netanyahu,” Ben Hubbard and David Halbfinger, citing “analysts,” wrote in the Times.

White House officials are worried the mushrooming crisis with Saudi Arabia could “derail a showdown with Iran and jeopardize plans to enlist Saudi help to avoid disrupting the oil market.”

Trump Still Ramps It Up 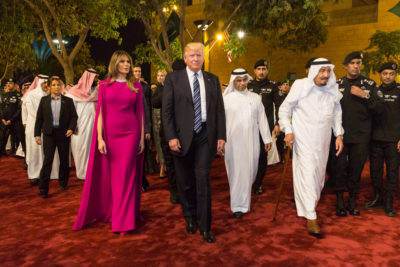 Following the dangerous and foolhardy withdrawal from the Iran nuclear deal — the Joint Comprehensive Plan of Action (JCPOA) — which pleased Israel and Saudi Arabia, the Trump administration is slated to announce on Sunday that companies doing business with Iran — including purchasing oil or making investments in the country — will be forbidden from doing business in the United States. The imposition of these punishing sanctions are intended to result in a full embargo of Iran’s oil.

Trump will need Saudi military and political cooperation if, “as threatened,” Iran retaliates against his oil embargo by taking “reciprocal, physical action to halt Saudi and Gulf states’ oil exports via the Strait of Hormuz in the Gulf and the Bab-el-Mandeb strait, at the mouth of the Red Sea,” Simon Tisdall noted in The Guardian. “If this crisis point is reached, escalating confrontations across the region cannot be ruled out.”

The Trump administration is relying on Saudi Arabia to pump extra oil once Iran is out of the market. But Congress is considering whether to punish Saudi Arabia for the Khashoggi case.

“To penalize what the Saudis care about most – oil revenue – would be to undercut the Iran policy and send the price of gasoline and heating oil significantly higher, just as winter approaches,” Sanger noted.

Richard N. Haass, president of the Council on Foreign Relations, told the Times, “It’s a neat trick if you both sanction a country and partner with them at the same time,” adding, “it’s not easy to keep the focus on Iran’s behavior when the Saudis are doing terrible things to journalists and dissidents, and bombing children in Yemen.”

The Khashoggi murder has shone a spotlight on the commission of Saudi war crimes in Yemen, aided and abetted by the United States. In a New York Times opinion piece, Sen. Bernie Sanders called for ending US military support to Saudi Arabia. But Sanger cited administration sources as saying, “the issue of limiting American arms sales to Saudi Arabia, which Mr. Trump has said would threaten American jobs, pales in importance [to the plan to squeeze Iran].”

Meanwhile, Trump continues to rattle the sabers at Iran. 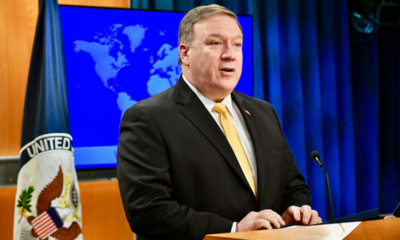 Pompeo: US will ‘crush’ Iran. (US Government Photo)

On Oct. 23, the Terrorist Financing Targeting Center, comprised of the United States, Saudi Arabia, the United Arab Emirates, Bahrain, Kuwait, Oman and Qatar, designated nine individuals “associated with the Taliban,” some of whom have “Iranian sponsors.” A Bush-era executive order authorizes the Office of Foreign Assets Control to block the assets of anyone or any group designated as a terrorist.

Treasury Secretary Steven Mnuchin announced the terrorism designations in a press release, stating that the United States is “targeting key Iranian sponsors providing financial and material support to the Taliban.” He added, “Iran’s support to the Taliban stands in stark violation of the United Nations Security Council Resolutions and epitomizes the regime’s utter disregard for fundamental international norms.”

In a May speech, Secretary of State Mike Pompeo said the United States would “crush” Iran with new sanctions so severe that regime change could result.

Moreover, on Oct. 5, the White House released its long-awaited 25-page counterterrorism strategy, which calls Iran “the most prominent state sponsor of terrorism.” It pledges to fight Iran and “radical Islamist” militants to eliminate the terror threat against the United States.

In fact, Iran has not used aggressive military force against a hostile neighbor for more than 200 years. Curiously, the new U.S. counterterrorism strategy fails to identify Saudi Arabia, which is targeting civilians and killing thousands of them in Yemen (and backing extremists in Syria and elsewhere), as a terrorist threat.

Eric Margolis, a veteran war correspondent in the Middle East, reported in July that the Pentagon has prepared plans for an air attack on Iran:

The Pentagon has planned a high-intensity air war against Iran that Israel and the Saudis might very well join. The plan calls for over 2,300 air strikes against Iranian strategic targets: airfields and naval bases, arms and petroleum, oil and lubricant depots, telecommunication nodes, radar, factories, military headquarters, ports, water works, airports, missile bases and units of the Revolutionary Guards.

The National Coalition to Prevent an Iranian Nuclear Weapon, a group of more than 50 prominent foreign policy experts, released a statement saying, “The Trump Administration’s Iran strategy is to assert maximum economic, political and military pressure to change Iran’s behavior and threaten, if not cause, collapse of the regime.” That strategy, they added, “has left Iran the option of either capitulation or war.”

Many in Congress are worried that Trump may be gunning for Iran. They are trying to prevent him from mounting a preemptive strike.

Will Congress Stop an Attack? 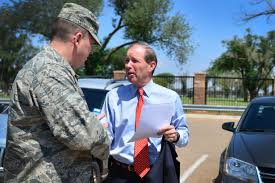 On Sept. 28, Sen. Tom Udall (D-NM), joined by Senators Patrick Leahy (D-VT), Dianne Feinstein (D-CA), Richard Durbin (D-IL), Bernie Sanders (I-VT), Jeff Merkley (D-OR), Martin Heinrich (D-NM) and Chris Murphy (D-CT), introduced the Prevention of Unconstitutional War with Iran Act of 2018. It would prohibit the United States from appropriating money that could lead to war with Iran unless Congress expressly approves. The legislation makes clear that a preemptive attack on Iran would be illegal under the War Powers Act and the US Constitution.

The Udall bill notes that “the International Atomic Energy Agency repeatedly verified that Iran has continued to comply with it nuclear-related obligations under the Joint Comprehensive Plan of Action.” US noncompliance with the JCPOA, the bill continues, “risks an unnecessary conflagration with Iran through the use of sanctions against both allies and adversaries in the region and throughout the world, absent a clear diplomatic path for resolving the crisis.” The bill quotes Trump’s tweet that Iran “[w]ill suffer consequences the likes of which few throughout history have ever suffered before.”

Congress explicitly provided in the National Defense Authorization Act of 2019, “Nothing in this Act may be construed to authorize the use of force against Iran or North Korea.”

In April, a bipartisan bill to replace the 2001 Authorization for the Use of Force (AUMF) was introduced in the Senate and is currently pending in the Foreign Relations Committee. The proposed bill would allow the president “to use all necessary and appropriate force” against Iraq, Afghanistan, Syria, Yemen, Libya and Somalia, al-Qaeda, ISIS (also known as Daesh), the Taliban and their “associated forces.” But by its terms, “associated forces” specifically excludes “a sovereign nation.” So, the new AUMF would not cover Iran.

That wouldn’t stop Trump from purporting to rely on the 2001 AUMF to attack Iran, however. Although specifically limited to those responsible for 9/11, Bush, Obama and Trump have all used it to justify at least 37 military operations, many of them unrelated to 9/11.

Marjorie Cohn is professor emerita at Thomas Jefferson School of Law, former president of the National Lawyers Guild, deputy secretary general of the International Association of Democratic Lawyers and an advisory board member of Veterans for Peace. The editor and contributor to The United States and Torture: Legal, Moral, and Geopolitical Issues, Cohn testified before Congress about the Bush interrogation policy.

47 comments for “Despite Saudi Crisis, US Increases Threats Against Iran”