Newly released declassified documents prove once and for all that CIA Director Gina Haspel oversaw torture in Thailand, which the chairman of the Senate Intelligence Committee knew all along, as Ray McGovern explains.

Newly released official documents obtained by the National Security Archive showing that CIA Director Gina Haspel directly supervised waterboarding at the first CIA “Black Site” simply confirm what Senate Intelligence Committee Chair Richard Burr (R-NC) already knew as he orchestrated the charade that was Haspel’s confirmation hearing.  Burr allowed her to “classify” her own direct role in waterboarding and other torture techniques so that it could be kept from the public and secure her confirmation—-further proof that this Senate oversight committee has instead become an overlook committee.

That Haspel supervised the torture of Abd al-Rahim al-Nashiri at the first CIA “black site” for interrogation was already clear to those who had followed Haspel’s career, but she was able to do a song and dance when Sen. Sen. Diane Feinstein (D-CA) asked her about it.  Haspel declined to reply on grounds that the information was classified. It was of course because Haspel herself had classified it. All the senators knew that only too well. Sen. Ron Wyden (D-OR) had strongly objected to this bizarre practice only minutes before.

Witnessing this charade from the audience prompted me to stand up, excuse myself for interrupting, and suggest that the committee members were entitled to an honest answer since this was a public hearing with thousands watching on TV.  The American people were also entitled to know whether or not Haspel was directly involved in torture. As I was calmly pointing out that any Senate Intelligence Committee member who prepared for the hearing already knew the answer, I was “escorted out,” manhandled and charged with disrupting Congress and resisting arrest. 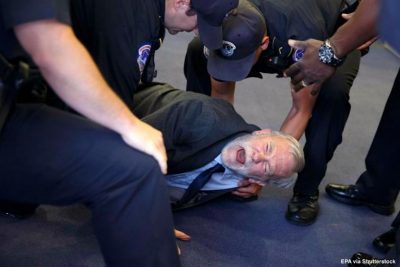 McGovern after he made a comment at Haspel’s confirmation hearing.

Jeremy Scahill later did a good job on Democracy Now! in putting needed context around the free pass and encouragement CIA torturers continue to enjoy at the hands of co-conspirators like Sen. Burr.

I have now had time to read through the documents obtained by the National Security Archive via Freedom of Information Act requests.  Suffice it to say they are so sad and sickening that I had to stop reading.

Burr was on the House Intelligence Committee, led by Porter Goss (R-FL) and later by Pete Hoekstra (R-MI), that winked at torture (not to mention blindly accepting the faux intelligence used to “justify” war on Iraq).  Might the CIA remind Burr of his condoning of torture, were he to chose not to play along with the Haspel nomination?

Burr’s record on the Senate Intelligence Committee is equally dubious. In January 2015, as soon as he took the Senate Intelligence Committee chair from Feinstein, he recalled all copies of the four-year committee study based on official CIA documents, which not only exposed unimaginably heinous forms of torture but found no evidence that any actionable intelligence was obtained from them.  To her credit, Feinstein had faced down both President Barack Obama and CIA Director John Brennan and got a long Executive Summary of the committee investigation published just before she had to relinquish the chair.

As an act of conscience, on March 2, 2006 I returned the Intelligence Commendation Medallion given me at retirement for “especially meritorious service,” explaining, “I do not want to be associated, however remotely, with an agency engaged in torture.”  I returned the medallion to Hoekstra (R, Michigan), who was then-Chairman of the House Intelligence Committee, with a statement explaining my reasons.

Hoekstra then secretly added to the Intelligence Authorization Act for FY’07 (HR5020) a provision enabling the government to strip intelligence veterans of their government pensions. HR5020 passed the full House, but Congress opted instead for a continuing resolution.

On December 11, 2014, I had an opportunity to tell Hoekstra exactly what I thought of his underhanded, Lone-Ranger attempt (he did not inform his House Intelligence Committee colleagues) to make it possible to revoke the government pensions of people like me.  I confronted the former Congressman in person off-air, after we two were interviewed live on CCTV’s “The Heat” about the Senate Intelligence Committee findings regarding CIA torture.  It was an uncommon chance to hold Hoekstra publicly accountable for condoning torture, and the Michigan congressman rose to the occasion. (See minutes 8:15 to 10:41)

The bottom line?  The foxes have been guarding the chicken coop for many years now.  Haspel will fit right in. O Tempora, O Mores.

Ray McGovern works with Tell the Word, a publishing arm of the ecumenical Church of the Saviour in inner-city Washington.  He was an Army Infantry/Intelligence officer and then a CIA analyst for a total of 30 years, and was a Presidential briefer from 1981 to 1985.

← Election Results Could be Good for Pakistan, Bad for US
‘Too Big to Fail’: Russia-gate One Year After VIPS Showed a Leak, Not a Hack →

65 comments for “Senator Richard Burr: a Longtime Fan of Torture”