While Western media decried Hizbullah’s victory in last month’s election, any notion that the Shi`ite party can dominate Lebanese politics is at best an exaggeration, says As’ad AbuKhalil.

Part One of this article can be read here.

One can’t evaluate the results of last month’s Lebanese elections without understanding the real power of the legislative branch, namely that Lebanon’s bizarre sectarian system is a deformed version of a parliamentary democracy.

The president ruled supreme prior to the 1989 Ta’if reforms, which ended the 15-year civil war and restructured the Lebanese political system. He was able to tailor the results of the Lebanese elections to his liking. This was done either through outright rigging (as Kamil Sham`un did in 1957 with U.S. help) or by gerrymandering.

Furthermore, the Lebanese president (who has to be a Maronite Christian) had absolute power and would often push the parliament in the direction he wanted.

But the Lebanese political system was thoroughly changed after 1989, and the powers of the president were greatly diminished, reflecting the changes in the balance of power between the various warring sects and factions in the war.

New powers were given to the Council of Ministers (the Cabinet), although there is still an unending constitutional debate over whether the Ta’if reforms really shifted the powers of the president to the Council of Ministers or to the office of the prime minister (who has to be a Sunni Muslim). The speaker of parliament (who has to be a Shi`ite Muslim) was awarded an extension of his term from one year to four, although he remains largely without meaningful authority.

The real power in Lebanon’s parliament rests with a handful of key zu`ama’, sectarian  political bosses, many of whom became war lords in the civil war, and not in the committees where draft bills are theoretically formulated. More often than not, the zu`ama meet in private and agree on key decisions and policies. Furthermore, these political bosses all have foreign sponsors, which means that foreign embassies often play a key role in the political decision- making process.

Former Prime Minister Salim Huss told me in 2000 that the U.S. embassy once handed him a draft law on artistic and intellectual piracy and requested that the parliament adopt it as is. The influence of the American-Saudi alliance over their Lebanese clients is arguably greater than Iran’s or Syria’s over theirs: Hizbollah leader Hasan Nasrallah’s influence within his camp can’t be compared to Sa’d Hariri’s in his.

To be sure, Syria exercised supreme control over Lebanese affairs prior to 2005, but often in conjunction with the Saudis and Americans. Ironically it was the Americans and Saudis, with France, that pushed Syria out of Lebanon in 2005, and now the Washington-Riyadh role clashes and competes with the role of the other camp, now headed by  Nasrallah. 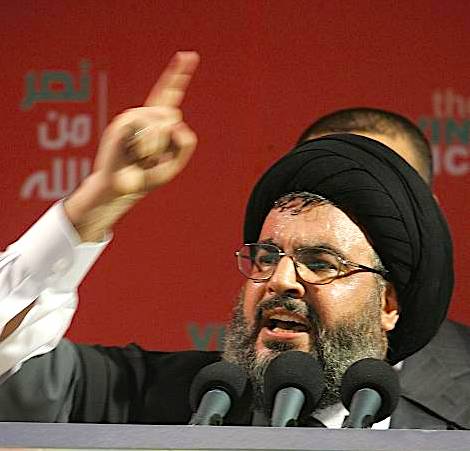 Thus, Nasrallah is not only acting on behalf of his party, but also of the Iranian-Syrian alliance in Lebanon and beyond. The leaders of the March 14 alliance, which was formed in the so-called Cedar Revolution after the assassination of former prime minister Rafic Hariri in February 2005 and which eventually led to the departure of Syrian troops from Lebanon, never had that much decision-making powers in their camp: they were mere obedient tools.

This became clear when March 14 leader Sa`d Hariri was ordered in late 2017 strapped to his chair and slapped repeatedly in Riyadh before being ordered by his Saudi masters to read a resignation letter on Saudi TV. After returning to politics in Beirut, Hariri tried to deny that he was humiliated. He now expresses thanks and gratitude for the “support” he received from his former jailer, Muhammad bin Salman, the Saudi crown prince.

Hizbullah’s fortunes in the May 6 parliamentary election, the first in nine years, attracted the most international attention. It was clear that Western governments and media were invested in the Lebanese elections when days before the vote The New York Times and The Wall Street Journal both wrote features on a lone Shi`ite candidate named Yahya Shamas.

No one—outside of Lebanon—had ever heard of this man (although I am sure he is well-represented in U.S. Drug Enforcement Administration files). He was featured in major U.S. media because he ran against Hizbullah’s list in the Ba`lbak electoral district.

Shamas was convicted of drug smuggling (and jailed) during the years of Syrian political domination, although the conflict between him and Ghazi Kan`an, the head of Syrian intelligence at the time, was over their “share” of the spoils. (Shamas lost, although he—like many other defeated candidates—contested the results and appealed to the constitutional court).

The election results were a victory for Hizbullah, which the U.S. State Department lists as a terrorist organization, but that doesn’t mean Hizbullah will “dominate” the Lebanese parliament as some Western media headlines would have one believe.

Yet how does one measure Hizbullah’s political fortunes from the results? If measured by sheer parliamentary seats, the party won only 14. All Hizbullah candidates won, except for one candidate in Jubayl, and that was because the election there is determined by the majority Christian vote.

The number of Hizbullah seats is not big but the party—when it comes to cabinet and parliamentary representation—always settles for far less than its actual political weight perhaps to avoid alarming its enemies in Lebanon and beyond. In fact it allows its junior Shi`ite partner, Amal Movement, to have more seats in parliament and the cabinet.

Amal obtained 17 seats. An examination of the preferential votes obtained by individual Hizbullah candidates versus Amal candidates indicates that Hizbullah is clearly more popular than Amal in predominantly Shi`ite areas, however.

But the ability of the close allies to maintain total political representation of all Shi`ite seats in parliament is always seen—more by Hizbullah enemies than its supporters—as a plebiscite on the matter of armed resistance and the preservation of Hizbullah militias.

The two Shi`ite partners form a joint political presence for the second most seats—29—in the Lebanese parliament. Their chief rival, the Sunni Future Movement (of the Hariri family) obtained only 21 seats, down from 35 seats in the last election.

This was a huge blow to the Saudi camp in Lebanon, and to the Hariri leadership. The Hariri Movement lost much of its popularity for a variety of reasons including the political incompetence of its leader, Sa`d Hariri, and his declining financial powers.

He does not enjoy the same fortune which he inherited from his father, and the Saudi camp (and apparently many Lebanese voters) do not trust him fully after the Saudis humiliated him. Thus Saudi Arabia denied him the largesse it had showered on his movement in the 2009 election.

The setback for the Hariri movement was also the result of a changing electoral system in which proportional representation in medium size districts caused Hariri’s Future Movement to lose Christian and Shi`ite candidates that it used to carry with ease. This defeat put an end to the Hariri political monopoly over Sunni political representation in Lebanon. The Hariri’s decline among Sunnis was due to their Sunni rivals who are allies of Shi`ite Hizbullah mostly because of the latter’s armed resistance against Israel and their opposition to Hariri family economic policies in Lebanon.

In a nation where the national army is weak, Hizbullah is seen, even by some Sunnis, as the best defense against a southern “neighbor” that has several times invaded and occupied Lebanon.  Some Christians have seen Hizbullah of late as a defender of Lebanon’s eastern flank against ISIS and Nusrah fighters in Syria. 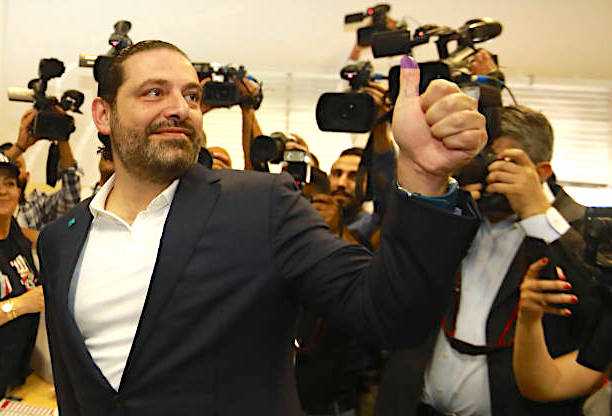 Hariri: A thumbs down from voters. (Photo by ANWAR AMRO/AFP/Getty Images)

Even in Beirut, the stronghold of the Hariri family, Sa`d Hariri had to share representation of the capital with a rival billionaire (Fu’ad Makhuzumi) and a head of an Islamist organization (Al-Ahbash or the Association of Islamic Charitable Projects), which is aligned with the Syrian regime. To guarantee victory in some districts (namely Akkar and Biqa`) Hariri was obliged to invite to his lists known supporters of the Syrian regime.

The Outcome for Christians

Among Christian voters, the Lebanese Forces (favored by the Saudi regime) improved its representation, obtaining 15 seats (up from 8 seats).

The biggest loser among Maronite Christians was the Phalanges Party, which shrunk from five to three seats. The Phalanges Party now belongs to the history books, where it will be remembered for its particularly brutal role as an ally of Israel in the Lebanese civil war.

The Saudi-backed Lebanese Forces (LF) now carries the mantle of right-wing sectarianism, which was pioneered by the Phalanges. (LF was originally a military organization operating under the Phalanges umbrella during the war).

The Lebanese Forces however had a run for its money by the equally right-wing Free Patriotic Movement (FPM), which advocated sectarian and racist stances against Palestinians and Syrians. The head of the FPM, Foreign Minister Jubran Basil, son-in-law of Lebanese President Michel `Awn, disturbed his alliance with Hizbullah by going far in mimicking the Phalanges’ ideology. He even paid tribute to pro-Israel war criminal, Bashir Gemayyel, a senior Phalanges official and commander of the LF who was assassinated in 1982 days after his installation as president by the invading Israeli occupation army.

We can either measure the election results merely by the political parties performances or by their stance toward Hizbullah and their armed forces.

If we take the latter as the criterion, then Hizbullah and its allies clearly won and now control more than half of the seats in parliament (close to 70 seats).  The  commander of the Iranian Quds Force, Qasim Suleimani, was mistaken when he bragged a few days ago that Hizbullah won 74 seats because his count includes opponents of Hizbullah who won on the lists of the Free Patriotic Movement.

But arithmetic calculations alone do not explain Lebanese politics. Deep sectarian divisions, and the willingness of the Saudi camp in Lebanon to engage in blatant sectarian agitation, impose limitations on any political victory by any side in the country.

Hizbullah knows full well that sectarian warfare is the last refuge of political losers in Lebanon. Furthermore, Hizbullah’s narrow religious-sectarian doctrine prevents it from ever being able to rule over all Lebanon, no matter how much support it may enjoy. In other words, Lebanon has not changed much—the results of the elections notwithstanding.