A just published book on the RFK murder re-examines the evidences and asks what the world might be like if the four 1960s assassinations never occurred.

Authors Tim Tate and Brad Johnson begin their new book, The Assassination of Robert F. Kennedy:  Crime, Conspiracy and Cover-Up – A New Investigation (Thistle Publishing) with this quote from RFK the day after Martin Luther King Jr. was killed: “What has violence ever accomplished? What has it ever created? No martyr’s cause has ever been stilled by an assassin’s bullet.”

Just two months later Kennedy would become the last in a series of four assassinations of American leaders from 1963-68: President John F. Kennedy, Malcolm X, Martin Luther King and Bobby Kennedy. The cumulative political impact of those murders is hard to overstate. Toward the end of their bookthe authors try to estimate what that impact was.

Though it’s impossible to say for sure, they conjecture that, at the very least, the Vietnam War would have ended much sooner and would not have expanded into Laos and Cambodia. We know for certain that President Richard Nixon’s decision to expand the war caused the collapse of the government of Cambodia’s Prince Sihanouk, the eventual takeover by the Khmer Rouge and the death of two million people.

The murder of Bobby Kennedy has always seemed to get less attention in the mainstream media than the other 1960s assassinations, perhaps because it’s been considered an “open and shut case.” There were, after all, seventy witnesses to RFK’s murder. But the Los Angeles Police Department decided very early, and quite literally, that what happened in the wee hours of June 5, 1968 would not be another Dallas, as Tate and Johnson say.

It’s not widely known that Sirhan Sirhan’s attorneys did not mount a defense to the charges against him. Instead they resorted to what’s known as an alternative defense called “stipulation to the evidence.” In legal terms this means the defense accepts the testimony and exhibits presented by prosecutor as valid. Therefore, there was no argument in court over the medical, eyewitness or ballistics evidence.

What the trial was really about was Sirhan’s mental state. Since his legal team thought he was guilty, they tried to avoid capital punishment by arguing he was mentally unbalanced at the time. This failed, and Sirhan only escaped electrocution because California later outlawed the death penalty.

As Tate and Johnson show, this defense strategy doomed Sirhan. For example, when coroner Thomas Noguchi was on the stand, lead defense lawyer Grant Cooper actually tried to curtail his testimony by saying, “Is all this detail necessary? I think he can express an opinion that death was due to a gunshot wound.”

Noguchi should have been Sirhan’s star witness, and Cooper should have had him on the stand all day, the authors argue. Noguchi’s 62-page autopsy report proved that all the bullets that hit the senator entered from behind Kennedy. They also entered at extreme upward angles and at close range, i.e. from 1-3 inches. 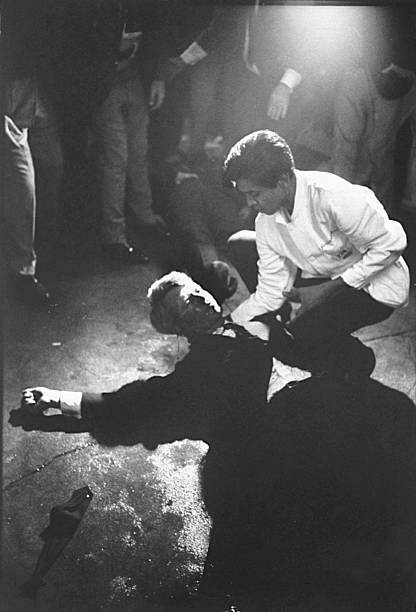 Every witness in the pantry of the Ambassador Hotel placed Sirhan in front of Kennedy, and at a distance of 2-5 feet. The fatal headshot struck RFK behind the right ear at point blank range, with the barrel almost touching his skin. As the authors note: How could not one single witness recall such a horrifying image? Witnesses put Sirhan in front of Bobby Kennedy and therefore he could not have been close enough to fire the shot that ended Kennedy’s life.

As Tate and Johnson describe, Noguchi was struck by the deep circular powder burns in Kennedy’s hair. He did experiments with pigs’ ears, firing at them from differing close ranges. The only distance at which he could duplicate that imprint was 1.5 inches. This is considered a point blank or contact shot. If Cooper had walked Noguchi through those experiments, the prosecution would have had the steep challenge of countering that evidence. But it never happened.

We know today that the police understood the problem they had. As the authors show, using the LAPD’s own secret exhibits, the authorities had performed three different reconstructions of the shooting. Each one of these reenactments featured certain key witnesses from the Ambassador Hotel pantry. In each of them, at the direction of the witnesses, Sirhan was placed several feet in front of Kennedy. Since the two earliest reconstructions were done in 1968, before the trial, they could have been used as strong evidence for the defense.

Because Noguchi’s testimony was curtailed, his autopsy report was not entered into the trial record. But perhaps worse, because the defense stipulated to the evidence, the work of prosecution witness, DeWayne Wolfer, head of the LAPD crime lab, never underwent cross-examination. One of the most serious problems for the official case is that Sirhan’s handgun held a maximum of eight shots. Yet in addition to the four shots that struck Kennedy there were five other victims. Three bullets hit Kennedy and one passed through his jacket shoulder pad. That’s nine shots and Sirhan could only have fired eight. Here is where Wolfer borrowed a device from the John Kennedy case: a Magic Bullet.

In addition to these nine shots, there was also evidence that there were bullets in door frames, ceiling tiles, and the swinging gate into the pantry. But Sirhan’s lawyer agreed that the prosecution would not have to prove which bullet came from where.

Wolfer said that the bullet that went through Kennedy’s jacket shoulder also hit labor leader Paul Schrade in the middle of his forehead. Yet that bullet was fired from behind the senator and Schrade was walking behind Kennedy. As Schrade told the authors, when he heard that, it was the end of innocence for him on the RFK case.

Schrade said he would have had to be nine feet tall and bending over at his waist for that bullet to hit him in the head.

Wolfer had an interesting explanation for the bullet that hit bystander Elizabeth Evans. Because the police needed to account for holes in the ceiling tiles, Wolfer said that this projectile went through the tiles, and struck the ceiling behind them. It then ricocheted off that surface, making another hole on the way down, and then struck Evans. Yet, the hospital report on Evans said a bullet hit her in the front hairline traveling upward. In other words, like in a master pool game, this must have been a double bank shot.

But even Wolfer’s fertile imagination could not account for the evidence of the multitude of shots fired. This created serous problems because, as the authors describe, these extra bullet holes were witnessed by law enforcement professionals.

William Bailey was an FBI agent in Los Angeles who had been watching the California primary results on television in which Kennedy had just defeated Eugene McCarthy. After Kennedy proclaimed victory and said, “On to Chicago, and let’s win there,” Bailey fell asleep. He was awakened when a fellow agent knocked on his door and said they were assigned to the Ambassador to interview witnesses.

Bailey and his partner were there for a good part of the next two days. During that time, Bailey said he saw at least two bullet holes in the center divider of the swinging gate leading into the pantry. He also added that there appeared to be the base of two bullets in the holes. He was certain they were not nail holes.

Martin Patrusky, a waiter and crime scene witness, later said police told him there were two bullets that were taken out of the divider. In addition to this, there were two policemen who saw a bullet hole in the doorframe leading into the pantry. When the late Vincent Bugliosi, a lawyer who worked in the LA district attorney’s office at the time, called police officer Robert Rozzi to ask him about this, Rozzi said he saw what appeared to him to be a bullet about a foot and a half from the bottom of the floor embedded in the door frame. Bugliosi then called Sgt. Charles Wright who confirmed that there was a bullet hole in the frame and that it was later removed. This evidence, if true and which was kept out of the trial, appears to indicate that there were more shots in the pantry than Sirhan could have fired.

Co-author Johnson managed to locate an audio recording made by a Canadian journalist as he followed Kennedy from his victory speech in the Embassy Room to the pantry. That audiotape was in the archives of the RFK case in Sacramento. Johnson had it analyzed by Philip Van Praag, a master audio technician. After a long, detailed technical study, Van Praag concluded that there were at least 13 shots on the tape. Further, two pairs of shot sounds are too close to each other to be fired by one man.

As the authors note, the vast majority of the RFK evidence was supposed to be available for viewing after the trial of Sirhan. This did not happen. The fact it did not allowed certain officials involved to misrepresent the facts of the case to the public. Senator Kamala Harris, now the darling of the Democratic liberal establishment, then continued to deny Sirhan’s lawyers an evidentiary hearing while she was California attorney general.

A few months ago, Kennedy Jr. quietly visited Sirhan in prison. After months of sifting through the evidence at the behest of Schrade, he came to the conclusion that Sirhan had not killed his father. This startling news was reported by the The Washington Post. Kennedy Jr. supports Schrade’s plea for a new investigation. Kennedy’s son is an experienced attorney who is partly responsible for getting his cousin Michael Skakel out of prison. Kennedy’s book on that case was a powerful exposé of how the justice system failed when it was improperly influenced by outside factors.

Kennedy Jr.’s pronouncement may finally give his father’s case the attention and the serious analysis it deserves. Reading Tate and Johnson’s book shows how poor of a job the mainstream media has done. As late Congressman Allard Lowenstein said:

“Robert Kennedy’s death, like the President’s was mourned as an extension of the evils of senseless violence….What is odd is not that some people thought it was all random, but that so many intelligent people refused to believe that it might be anything else. Nothing can measure more graphically how limited was the general understanding of what is possible in America.”

Fifty years later our understanding of what is possible in America may not be so limited after all.

James DiEugenio is a researcher and writer on the assassination of President John F. Kennedy and other mysteries of that era. He is the author of The JFK Assassination : The Evidence Today. His most recent book is Reclaiming Parkland.