As Venezuelans go to the polls Sunday, the U.S. is working to disrupt the re-election of Nicolas Maduro and rollback leftwing governments in the region, reports Roger D. Harris.

Venezuelan President Nicolás Maduro is the frontrunner in the presidential elections that will take place on Sunday. If past pronouncements and practice by the United States are any indication, every effort will be made to oust an avowed socialist from the the U.S. “backyard.”

This week, the leftist president of Bolivia, Evo Morales, tweeted: “Before the elections they (U.S. and allies) will carry out violent actions supported by the media and after the elections they will try a military invasion with Armed Forces from neighboring countries.”

U.S. antipathy towards the Venezuelan government started with the election of Hugo Chávez in 1998, followed by a brief and unsuccessful U.S.-backed coup in 2002. Chávez made the magnanimous, but politically imprudent, gesture of pardoning the golpistas, who are still trying to achieve by extra-parliamentary means what they have been unable to realize democratically. After Chávez died in 2013, the Venezuelans elected Maduro to carry on what has become known as the Bolivarian Revolution.

In 2015 then U.S. President Barack Obama declared “a national emergency” because of a supposed Venezuelan threat to the U.S. The U.S. has military bases to the west of Venezuela in Colombia and to the east in the Dutch colonial islands. The Fourth Fleet patrols Venezuela’s Caribbean coast. Yet somehow in the twisted logic of imperialism, the phantom of Venezuela posed a menacing, “extraordinary threat” to the U.S.

Each year Obama renewed and deepened sanctions against Venezuela under the National Emergencies Act. Taking no chances that his successor might not be sufficiently hostile to Venezuela, Obama prematurely renewed the sanctions his last year in office even though the sanctions would not have expired until two months into Trump’s tenure.

The fear was that presumptive U.S. Secretary of State Rex Tillerson might try to normalize U.S. -Venezuelan relations to negotiate an oil deal between Venezuela and his former employer Exxon. As it turns out, the Democrats need not have feared Trump going soft on regime change.

Last August, Donald Trump publicly raised the “military option” to overthrow Venezuela’s democratically-elected government. Then David Smilde of the Washington Office on Latin America (WOLA) counseled for regime change, not by military means, but by “deepening the current sanctions” to “save Venezuela.” The somewhat liberal, inside-the-beltway NGO argued against a direct military invasion because the Venezuelan military would resist, not because such an act is the gravest violation of international law. 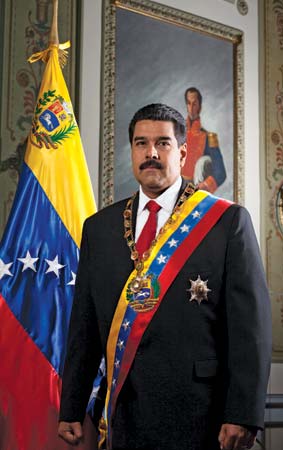 Maduro: Phony threat to the U.S.

Meanwhile the sanctions have taken a punishing toll on the Venezuelan people, even causing death. Sanctions are designed, in Richard Nixon’s blood-curdling words, to “make the economy scream” so that the people will abandon their democratically elected government for one vetted by the U.S.

In January, Trump’s first State of the Union address called for regime change of leftist governments in Latin America, boasting, “My government has imposed harsh sanctions on the communist and socialist dictatorships of Cuba and Venezuela.” Hearing these stirring words, both Democrats and Republicans burst out in thunderous applause.

“Dictatorships,” as the term is wielded by the U.S. government and mainstream media, should be understood as countries that try to govern in the interests of their own peoples rather than privileging the dictates of the U.S. State Department and the prerogatives of international capital.

Attack of the Clones

In addition to summoning Venezuela’s sycophantic domestic opposition, who support sanctions against their own people, the U.S. has gone on the offensive using the regional Lima Group to destabilize Venezuela. The group was established last August in Lima, the capital of Peru, as a block to oppose Venezuela.

The eighth Summit of the Americas was held in Lima in April under the lofty slogan of “democratic governance against corruption.” Unfortunately for the imperialists, the president of the host country was unable to greet the other U.S. clones. A few days earlier he had been forced to resign because of corruption. Venezuelan President Maduro was barred from attending.

Along with Peru and the U.S. ’ ever faithful junior partner Canada, other members of the Lima Group are: 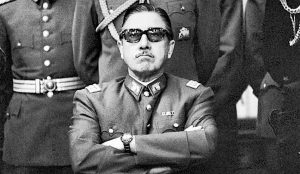 Such is the nature of the rightwing states allied against Venezuela in contemporary Latin America. Perhaps the most dangerous aspect of this right tide is the willingness of Brazil and Argentina to allow U.S. military installations in their border areas as well as conducting joint U.S. -led military exercises with contingents from Panama, Colombia and other countries.

Cuba, Bolivia, and Nicaragua are Venezuela’s few remaining regional allies, all of which have been subject to U.S. -backed regime-change schemes. Most recently, the Nicaraguan government undertook modest measures to increase workers’ and employers’ contributions but lower benefits. It led to violent demonstrations. Some sources hostile to the Ortega government labelled the protests as “made in the U.S. A.” In the face of such protests, the government rescinded the changes on April 23.

The Empire Strikes Back

Later that month, Juan Cruz, Special Assistant to President Trump and Senior Director for Western Hemisphere Affairs, was asked whether the U.S. government supports a military coup in Venezuela. Speaking for the White House and dripping with imperial arrogance, he responded affirmatively:

“If you look at the history of Venezuela, there’s never been a seminal movement in Venezuela’s history, politics, that did not involve the military. And so it would be naïve for us to think that a solution in Venezuela wouldn’t in some fashion include a very strong nod – at a minimum – strong nod from the military, a whisper in the ear, a coaxing or a nudging, or something a lot stronger than that.”

Across the Atlantic on May 3, the European Parliament demanded Venezuela suspend presidential elections. Four days later, U.S. Vice President Pence called on the OAS to expel Venezuela. Adding injury to insult, the U.S. announced yet another round of sanctions. Then the next day, U.S. ambassador to the UN Nikki Haley joined the chorus calling on President Maduro to cancel the presidential election and resign.

Far more blatant and frightening is the Plan to Overthrow the Venezuelan Dictatorship – Masterstroke, dated February 23, 2018. Masterstrokewas leaked on the website Voltairenet.org and picked up by Stella Calloni in the reliable and respected Resumen Latinoamericano. Although Masterstroke is unverified, the contents as reported by Calloni are entirely consistent with U.S. policy and pronouncements:

“The document signed by the head of the U.S. Southern Command demands making the Maduro government unsustainable by forcing him to give up, negotiate or escape. This Plan to end in very short terms the so-called ‘dictatorship’ of Venezuela calls for, ‘Increase internal instability to critical levels, intensifying the decapitalization of the country, the escape of foreign capital and the deterioration of the national currency, through the application of new inflationary measures that increase this deterioration.’”

That is, blame the Venezuelan government for the conditions imposed upon it by its enemies.

Masterstroke calls for, “Continuing to harden the condition within the (Venezuelan) Armed Forces to carry out a coup d’état, before the end of 2018, if this crisis does not cause the dictatorship to collapse or if the dictator (Maduro) does not decide to step aside.”

Failing an internal coup, Masterstroke plans an international military invasion: “Uniting Brazil, Argentina, Colombia and Panama to contribute a good number of troops, make use of their geographic proximity…”

With the urging of the Pope and under the auspices of the government of the Dominican Republic, the Maduro government and elements of the opposition agreed to sit down to negotiate last January in the hopes of ending the cycle of violence and the deterioration of living conditions in Venezuela.

By early February they had come to a tentative agreement to hold elections. The Maduro government initially opposed a UN election observation team as a violation of national sovereignty, but then accepted it as a concession to the opposition. The opposition in turn would work to end the unilateral sanctions by the U.S. , Canada, and the EU, which are so severely crippling the daily life of ordinary Venezuelans. Two years of adroit diplomacy by the Maduro government with the less extreme elements of the opposition were bearing fruit.

In a damned-if-you-do/damned-if-you-don’t scenario, the U.S. first accused Venezuela of not scheduling presidential elections. Then elections were scheduled, but too early for the U.S. . Then the date of the elections was moved to April and then extended to May. No matter what, the U.S. would not abide by any elections in Venezuela.Ipso factoelections are considered fraudulent by U.S. if the people might vote for the wrong candidate.

Mesa de la Unidad Democrática(MUD), the coalition of Venezuelan opposition groups allied with and partially funded by the U.S., are accordingly boycotting Sunday’s election and are putting pressure on Henri Falcón to withdraw his candidacy. Falcón is Maduro’s main competition in the election. MUD has already concluded that the election is fraudulent and are doing all they can to discourage voting.

CNBC, reflecting the Washington consensus, expects the U.S. to directly target the Venezuelan oil industry immediately after the election in what they describe as “a huge sucker punch to Maduro’s socialist administration, which is depending almost entirely on crude sales to try and decelerate a deepening economic crisis.”

Ever hopeful and always militant, Maduro launched the new Petro cryptocurrency and revalued the country’s traditional currency, the Bolivar, in March. The Petro is collateralized on Venezuela’s vast mineral resources: the largest petroleum reserves in the world and large reserves of gold and other precious metals. The U.S. immediately accused Venezuela of sinisterly trying to circumvent the sanctions…which is precisely the intent of the Petro and other economic reforms, some of which are promised for after the presidential election.

Latin America has been considered the U.S. empire’s proprietary backyard since the proclamation of the Monroe Document in 1823, reaffirmed by John F. Kennedy’s Alliance for Progress in 1961, and asserted by today’s open military posturing by President Trump. 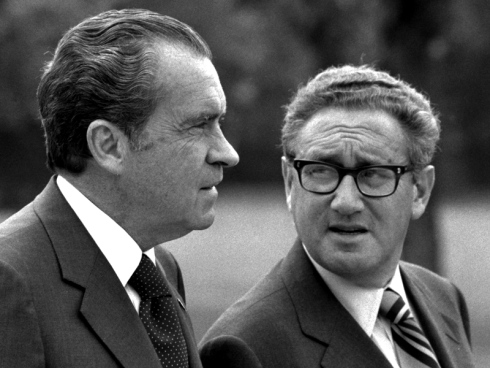 Kissinger: Issue too important for democracy.

The so-called Pink Tide of left-leaning governments spearheaded by Venezuela in the early part of this century served as a counter-hegemonic force. By any objective estimation that force has been ebbing but can awaken.

Before Chávez, all of Latin America suffered under neoliberal regimes except Cuba. If Maduro is overthrown, a major obstacle to re-establishing this hemispheric wide neoliberalism would be gone.

The future of Venezuela’s Bolivarian Revolution is pivotal to the future of the counter-hegemonic project, which is why it is the empire’s prime target in the Western Hemisphere. If the Venezuelan government falls, all Latin American progressive movements could suffer immensely: AMLO’s campaign in Mexico, the resistance in Honduras and Argentina, maybe the complete end of the peace accords in Colombia, a left alternative to Lenin Moreno in Ecuador, the Sandinista social programs in Nicaragua, the struggle for Lula’s presidency in Brazil, and even Morales and the indigenous movements in Bolivia.

As U.S. National Security Advisor Henry Kissinger said in 1970: “I don’t see why we need to stand by and watch a country go communist due to the irresponsibility of its people. The issues are much too important for the Chilean voters to be left to decide for themselves.”

Roger D. Harris is the immediate past president of the 32-year-old, anti-imperialist human rights organization, the Task Force on the Americas. He will be observing the Venezuela presidential election on a delegation with Venezuela Analysis and the Intrepid News Fund.

68 comments for “The U.S. is Meddling in Venezuelan Election”