Gina Haspel is the new CIA Director after the Senate voted on Thursday 54-44 to confirm her, with six Democrats agreeing. In this interview, Francis Boyle explains why Haspel could be at risk of arrest on trips abroad.

Francis Boyle is professor of international law at the University of Illinois College of Law. He is the author of many books on International Law and an outspoken critic of US policy in the Middle East. Boyle’s books include Foundations of World Order and the sequel, Destroying World Order. In the following interview with Pacifica Radio host Dennis J Bernstein, Boyle warns that, among other things, given her background as key implementer of the US torture program, Gina Haspel is vulnerable to be arrested for war crimes and crimes against humanity if she travels abroad.

Dennis Bernstein spoke with Francis Boyle on May 10th, 2018. [The transcript has been updated to reflect Haspel’s confirmation.]

DB: [We now have a new ] a new CIA director who likes to get her hands dirty and participate directly in torture. She has also been actively involved in making sure nobody finds out that torture takes place. 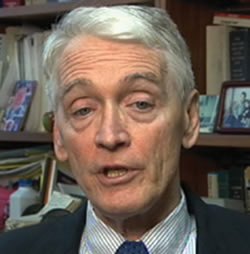 FB: “Bloody” Gina Haspel is her nickname at the CIA. She was directly involved in the extraordinary rendition program, which is a euphemism for the enforced disappearance of human beings and their consequent torture. This was in the complaint I filed against Bush and company in 2010 with the International Criminal Court for this crime against humanity.

Last fall the ICC prosecutor, Fatou Bensouda, said she is going to open up an investigation into the entire CIA extraordinary rendition program for violating the Rome Statute. Although the United States is not a party to the Rome Statute, these actions took place on the territorial sovereignty of Rome Statute states, and therefore the ICC does have jurisdiction. In my opinion, Gina Haspel is a presumptive war criminal and torturer. [We now] have a torturer and war criminal as head of the CIA.

As I have argued in anti-CIA cases here in the United States, the CIA is an organized criminal conspiracy like the SS and the Gestapo. We argued that successfully back in 1987 at University of Massachusetts, Amherst. I was involved in large numbers of CIA protest cases back in the 1980’s because of what was going on in Central America, with 35,000 dead in Nicaragua, 75,000 dead in El Salvador, and perhaps a quarter of a million in Guatemala. Most of those killed were Mayan Indians, which meant outright genocide.

DB: Will it be difficult for our director of the CIA to travel abroad? Maybe she has to be covert forever.

FB: That is correct. Under international law today–following a terrible decision by the International Court of Justice–heads of state and foreign ministers have diplomatic immunity while there are in office. But that is not going to apply to the head of the CIA.

I have a whole dossier here against Bush, Jr. and the rest of them for the extraordinary rendition program. We scared him out of Switzerland over that. A Swiss prosecutor demanded that Bush be prosecuted if he showed up in Switzerland. I know that Amnesty International and the Center for Constitutional Rights also have extensive dossiers against high-level US officials involved in these torture programs, including Haspel. She would be a sitting duck for international human rights lawyers. The evidence is there. 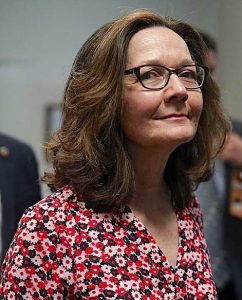 Haspel: Accountable for crimes she oversaw. (Screenshot from Today Show)

We have a 600-page executive summary of the Senate Foreign Intelligence Committee’s report on the extent of torture and extraordinary disappearances by the CIA. This is an official US government document. She was not personally named in there, but she was a high-level official who was personally involved. She certainly supervised the operation in Thailand. Under international law, there is a command responsibility. She is denying that she herself physically tortured anyone, but she supervised others doing the torturing. Under international criminal law, she is accountable for the criminal behavior she oversaw.

DB: She admitted at the hearing that she had the tapes of these torture sessions but she considered it prudent to destroy them.

FB: The Senate Committee had just announced their investigation so her boss, Jose Rodriguez, ordered her to destroy the tapes. Arguably, this would be obstruction of justice. [We now have] a notorious international criminal heading up the CIA. In my opinion, any senator who vote[d] to confirm her [became] an accessory after the fact to her crimes: torture, war crimes, crimes against humanity, and violations of the Geneva Conventions and the Convention against Torture.

DB: This is a very difficult time. We are all worried about our friend Ray McGovern, a former CIA analyst who was brutalized while protesting the Haspel nomination. Obviously, they are very serious about shutting up anyone protesting torture.

FB: Ray arguably has the defense of prevention of crimes under international law. I am not saying it would be a winner, because it is always tough going into a federal court and defending anyone protesting and resisting criminal behavior by the United States government.

Dennis J. Bernstein is a host of “Flashpoints” on the Pacifica radio network and the author of Special Ed: Voices from a Hidden Classroom. You can access the audio archives at www.flashpoints.net. You can get in touch with the author at dbernstein@igc.org.

← An Iranian Viewpoint on the Battle for Syria
The U.S. is Meddling in Venezuelan Election →