With Israel and Iran exchanging direct fire, Trump pulling out of the Iran nuclear deal and John Bolton promoting regime change in Tehran, Inder Comar offers four reasons why the US may be close to attacking the Islamic Republic.

In 1953, the United States’ Central Intelligence Agency, with the help of the British government, orchestrated a coup against Iran’s democratically elected prime minister, Mohammad Mossadeq.

Mossadeq had nationalized the Iranian oil industry, including the British Anglo-Iranian Oil Company. This was unacceptable to the United Kingdom. A request to the United States for assistance led to “Operation Ajax,” and the overthrow of Mossadeq.

Mossadeq’s political successor was the Shah of Iran, who ruled with the support of the U.S. and the U.K. until 1979, when he was himself overthrown by a popular revolution led by Ayatollah Khomeini.

None of this is secret. The CIA openly admitted that it was behind the coup in 2013.

While the coup is not a secret, it remains ancient history in the United States. Maybe even forgotten history.

But while the U.S. has forgotten, the rest of the world remembers. Iran certainly remembers. 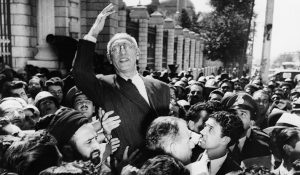 And this history adds a weighty and grim perspective to the U.S. decision to walk away from the multi-party agreement with Iran related to nuclear development.

The fact of the matter is that the United States has already successfully sponsored regime change in Iran. And even more recently, the United States invaded Iran’s neighbor, Iraq, under false pretenses to overthrow its government. The United States promised democracy, but instead, Iraqis were subjected to years of death and destruction, torture and ISIS.

The past is prologue. In the wake of the invasion of Iraq, the bombing of Libya, the support of rebel groups against Bashar al-Assad in Syria, and the support of a Saudi-led war of aggression in Yemen, the question on everyone’s mind at this time is a terrible one: has the United States now committed itself to violent regime change in Iran?

Here are four reasons that point towards a potential attack against Iran in the near future.

Trump thus joins in the opinion of his Secretary of State, Mike Pompeo, who has been openly advocating for regime change since 2016.

Trump additionally joins his national security advisor, John Bolton, who also supports regime change. Bolton gave a speech in 2017 in which he promised members of an Iranian exile group, known as the Mujahedeen Khalq (MEK) that the Iranian regime would be toppled by 2019 — next year. Bolton was an early member and supporter of the Project for the New American Century, a now infamous non-profit that provided the intellectual framework for the invasion of Iraq.

(2) The United States does not care about its international law obligations. In any other nation, a political party that openly advocated for war and regime change in another country would be a scandal.

But in the United States, it is common place, an every-day affair.

In the Middle East (and elsewhere), the United States has blatantly disregarded its international legal obligations to maintain collective peace and security. The United States committed the crime of aggression against Iraq, and illegally sponsored armed militias in Syria as a means of overthrowing the Syrian government.

There are very clear international norms regarding the use of violence internationally—norms that are designed to keep global peace.

But time and time again, the United States has ignored them, and violated them.

These international rules might stop another country. But they will not pose any barrier to a U.S.-led invasion of or attack against Iran.

(3) There is already a brewing conflict in Syria between Iran and Israel. One of the biggest proponents of a U.S. walkaway from the 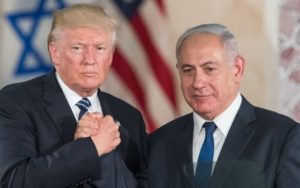 Netanyahu: Got Trump to walk away from the deal. (Yonatan Sindel/Flash90)

Iran deal was Benyamin Netanyahu, who gave a televised address in English on April 30, claiming that Iran could not be trusted.

In hindsight, the speech was nakedly aimed at convincing Trump to walk away from the deal. It worked. And just an hour after Trump’s decision to tear up the deal, Israel was already bombing targets in Syria, trying it seems to provoke an Iranian response. Iran did respond with an ineffective rocket attack on the Israeli-occupied Golan Heights, which on Thursday unleashed a full Israeli response on Iranian targets in Syria.

There is a real potential for a grave flashpoint in the coming weeks that could lead to a major war.

The U.S. is a country where nearly two-thirds of the population support torture against suspect terrorists, and where more than forty percent of Americans think it was the “right decision” to invade Iraq in 2003–a war that has claimed the lives of hundreds of thousands, produced millions of refugees, led to the rise of ISIS, and was done in blatant violation of international law.

The painful reality is that imperial values are ascendant in the United States.

A lonely, alienated mass of consumers, too spiritless to question the dominant narrative, will simply look the other way as their government targets another society for annihilation.

Democratic norms are lost even as a vast surveillance and killing machine is deployed abroad. Precious and inalienable freedoms are swiftly traded for the false glory of foreign wars and domination.

America is desperately in need of a cultural and spiritual change. But the good that America and Americans could do will never flower so long as war and aggression are accepted and celebrated.

This article was originally published on Inder Comar’s blog.