We’ve been through this before: the trumped-up threat from Iraq based on false evidence in 2003 is the harrowingly similar model to what is emerging for Iran in 2018, argues John Kiriakou.

I learned all of that firsthand in the run-up to the invasion of Iraq. In the spring of 2002, I was in Pakistan working against al-Qaeda. I returned to CIA headquarters in May of that year and was told that several months earlier a decision had been made at the White House to invade Iraq. I was dumbfounded, and when told of the war plans could only muster, “But we haven’t caught bin Laden yet.” “The decision has already been made,” my supervisor told me. He continued, “Next year, in February, we’re going to invade Iraq, overthrow Saddam Hussein, and open the world’s largest air force base in southern Iraq.” He went on, “We’re going to go to the United Nations and pretend that we want a Security Council Resolution. But the truth is that the decision has already been made.” 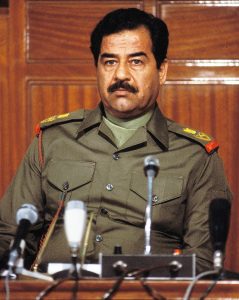 Soon after, Secretary of State Colin Powell began traveling around Europe and the Middle East to cultivate support for the invasion. Sure enough, he also went to the United Nations and argued that Iraq had weapons of mass destruction, necessitating an invasion and overthrow because that country posed an imminent threat to the United States.

But the whole case was built on a lie. A decision was made and then the “facts” were created around the decision to support it. I think the same thing is happening now.

First, Donald Trump said repeatedly during the 2016 campaign that he would pull out of the Joint Comprehensive Plan of Action (JCPOA) (which he did on Tuesday), also known as the Iran sanctions deal. The JCPOA allows for international inspectors to examine all of Iran’s nuclear sites to ensure that the country is not enriching uranium and is not building a weapons program. In exchange, Western countries have lifted sanctions on Iran, allowing them to buy spare parts, medicines, and other things that they had been unable to acquire. Despite the protestations of conservatives in Congress and elsewhere, the JCPOA works. Indeed, the inspection regime is exactly the same one that the United Nations imposed on Iraq in the last two decades.

Trump has kept up his anti-Iran rhetoric since becoming president. More importantly, he has appointed Iran hawks to the two most important positions in foreign policy: former CIA Director Mike Pompeo as secretary of state and former US ambassador to the UN John Bolton as national security advisor. The two have made clear that their preferred policy toward Iran is “regime change,” a policy that is actually prohibited by international law.

Perhaps the most troubling development, however, is the apparent de facto alliance against Iran by Israel, Saudi Arabia, the United Arab Emirates, and Bahrain. Israeli prime minister Benjamin Netanyahu’s recent “presentation” on what he called a clandestine Iranian nuclear weapons program was embarrassingly similar to Powell’s heavily scripted speech before the UN Security Council 15 years earlier telling the world that Iraq had a program. That, too, was a lie.

Saudi crown prince Muhammad bin Salman, the godfather of the Saudi war in Yemen, which in turn is a proxy war against Iran, recently made a grand tour of the United States and France talking about “the Iranian threat” at every turn. The rhetoric coming out of the UAE and Bahrain is at least as hostile as what has been spewed by the Saudis.

Meanwhile, there’s silence on Capitol Hill. Just like there was in 2002.

I can tell you from firsthand experience, that I’ve seen this before. Our government is laying the groundwork for yet another war. Be on the lookout for several things. First, Trump is going to begin shouting about the “threat” from Iran. It will become a daily mantra. He’ll argue that Iran is actively hostile and poses an immediate danger to the United States. Next Pompeo will head back to the Middle East and Europe to garner support for military action. Then US Ambassador to the UN Nikki Haley will scream in front of the UN Security Council that the US has no choice but to protect itself and its allies from Iran. The final shoe to drop – a clear indication of war – will be if naval carrier battle groups are deployed to the eastern Mediterranean, the Arabian Sea, or the Persian Gulf. Sure, there’s always one in the region anyway. But more than one is a provocation.

We have to be diligent in opposing this run into another war of choice. We can’t be tricked or taken by surprise. Not again.

This piece originally appeared at RSN.

114 comments for “The Coming War Against Iran”