Bashar al-Assad is just the latest in a long line of Middle East leaders demonized by colonial Britain and the U.S. for their independence, says Eric Margolis in this commentary.

These are all names the western media and politicians routinely heap on Syria’s president, Bashar al-Assad.  He has now become the top Mideast villain, the man we love to hate.

As a veteran Mideast watcher, I find all this hard to swallow. Compared to other brutal Mideast leaders, Assad is pretty weak tea. The U.S./British propaganda effort to paint Assad in blackest colors is having a difficult time.

Mideast leaders who toe the U.S. line and make nice to Israel are invariably called ‘statesmen’ or ‘president’ by the American government and its increasingly tame media.  Their repression is conveniently downplayed.

Saudi rulers are reverently treated by despite leading the world in executions.  Last year, 44 people were publicly beheaded.  In some years, around 150 people have lost their heads in Saudi Arabia, often a quarter of them Pakistani guest workers.  Having been arrested by the Saudi religious police, I can tell you that the kingdom is a police state with sand dunes and camels.  Saudi vassal states Bahrain and the Emirates are better, but not much.

Morocco, a key U.S. ally, is notorious for its ghastly prisons and brutal torture.  Iraq and Afghanistan, now under U.S. control, are even worse. Israel, the largest recipient of U.S. aid, holds close to 7,000 Palestinian political prisoners, among them 400 children, and is gunning down Palestinian demonstrators on the Gaza border.

Syria has always been a repressive police state. I recall watching ‘spies’ being hanged in front of my hotel.  Its various police forces are notorious for brutality and torture. In fact, until recently, the U.S. actually sent captive suspects to Syria to be tortured and jailed.

That was before Washington made the decision to overthrow Syria’s legitimate government (‘regime’ in DC talk) as the first step in attacking Iran.

But Damascus was no worse a human rights abuser than Cairo, Amman, Rabat and Riyadh, all U.S. vassals.

While looking at the current western hate campaigns against Syria and Iran, keep in mind the history of the modern Mideast.  We are again seeing the 1914 era lies from London about Belgian babies speared on German bayonets.

‘Hitler on the Nile’ 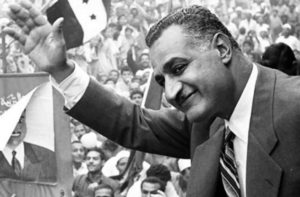 Nasser: British tried to kill him.

Any Arab or Iranian leader who sought an independent policy or refused the tutelage of London and then Washington was delegitimized, excoriated, and demonized. Remember the Iranian leader Mohammed Mossadegh overthrown in a CIA coup?  The renowned Egyptian leader, Gamal Abdel Nasser, whom the British branded ‘Hitler on the Nile’ and tried to assisante? Or the late, murdered Libyan Muammar Khadaffi, called ‘Mad Dog of the Mideast’ by President Ronald Reagan?

Imam Khomeini of Iran and President Ahmadinejad, both favored targets of western media invective, and both compared to the much overused Hitler. Saddam Hussein, the ‘Butcher of Baghdad,’ and that modern Dr Fu Manchu, Osama bin Laden, the all-time favorite Muslim arch villain.

Of course, there’s nothing new in this nasty name-calling.  During the Victorian Era, Britain’s press demonized arch villains like ‘the Mad Mullah,’ the Mahdi, the Fakir of Ipi, and Nana Sahib of the 1857 Indian uprising against British imperial rule.

Bashar al-Assad was a mild-mannered ophthalmologist living in London with his British-born wife.  When his rash elder brother Basil was killed in a car crash, Bashar was compelled to return to Syria and become the nominal political leader after the death of his very tough, ruthless father, Hafez al-Assad.  Bashar’s main role was mediating between powerful factions in Damascus and trying to modernize his nation (while managing the police state inherited from his father).

In 2011, the U.S., Britain, Israel and Saudi Arabia ignited an uprising in Syria using often fanatical jihadists.  The shy, retiring Bashar was forced to become war leader in a ruthless civil conflict as his nation disintegrated.

President Trump, whose B-52 bombers are ravaging Afghanistan, Somalia and Yemen calls Assad a ‘monster.’  Some of his relatives are indeed ruthless.  But very many Syrians think of Assad as their nation’s only hope of returning to normalcy.

Eric S. Margolis is an award-winning, internationally syndicated columnist and book author. His articles have appeared in the New York Times, the International Herald Tribune, Times of London, the Wall Street Journal, the Khaleej Times, Lew Rockwell and other news sites in the Middle East and Asia.  He has appeared as an expert on foreign affairs on CNN, BBC, ABC, France 2, France 24, Al Jazeera, CTV, CBC, CCTV China His internet column is found at  www.ericmargolis.com. He is author of two best-selling books ”War at the Top of the World – The Struggle for Afghanistan and Asia” and “American Raj, How the U.S. Rules the Mideast”.

69 comments for “Wanted: The ‘Butcher of Damascus’ to Return Normalcy to Syria”