Donald Trump turns out to be a pretty good liar, even if he frequently has no idea what he’s talking about, says Phil Giraldi in this commentary. But the prize for lying has to go to the British.

At least since the time of Marcus Tullius Cicero in the late Roman Republic everyone has certainly understood that politicians lie all the time. To be sure, President Donald Trump has been exceptional in that he has followed through on some of the promises he made in his campaign, insisting periodically that he has to do what he said he would do.

Unfortunately, those choices he has made to demonstrate his accountability to his supporters have been terrible, including moving the U.S. Embassy in Israel from Tel Aviv to Jerusalem, threatening to end the Iran nuclear agreement and building a wall along the Mexican border. Following through on some other pledges has been less consistent. He has increased U.S. military engagement in Afghanistan and turned the war over to the generals while also faltering in his promise to improve relations with Russia.

The potential breakthrough offered by promising exchanges during phone calls to Vladimir Putin have been negated by subsequent threats, sanctions and expulsions to satisfy hysterical congressmen and the media.

Concerning Syria, Trump last Tuesday said “I want to get out,” promising to pull U.S. troops out very soon, but was quickly brought to heel by pressure from Congress and a phone call from Israeli Prime Minister 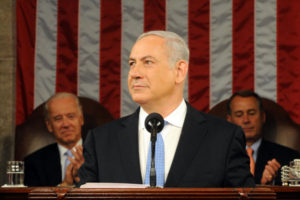 Netanyahu: Has Congress to do his bidding. Here addressing a joint session, May 24, 2011 (Photo by Avi Ohayun/GPO)

Benjamin Netanyahu that compelled him to change his mind within 24 hours. Israel wants chaos in Syria and its instrument of choice is the American military. Netanyahu has Congress to do his bidding and, for whatever reason, appears to also have Trump under his thumb.

So Donald Trump turns out to be a pretty good liar, even if one has to take into account the fact that he frequently has no idea what he is talking about. But the prize for lying at a high level has to go to the British as related to what has been going on both in the Middle East, with Russia, and also in Britain itself.

Former Prime Minister Tony Blair was the first master at dissimulation in 2002 when his intelligence chief Sir Richard Dearlove told him that the Bush White House had decided on war and “the intelligence and facts were being around the policy” regarding Iraq, meaning that it was ignoring the information that did not support its desire to create a pretext for invading the country and removing Saddam Hussein.

Blair presumably could have derailed the ill-fated invasion by refusing to go along with the venture, which was a war crime, but instead he fully supported George W. Bush in the attack. He thereby had a hand in America’s worst foreign policy disaster ever. In 2016 an official British government inquiry determined that Bush and Blair had indeed rushed to war together. The Global Establishment has nevertheless rewarded Tony Blair for his loyalty with Clintonesque generosity. He has enjoyed a number of well-paid sinecures and is now worth in excess of $100 million.

Moving along to the present, we have Prime Minister Theresa May. May has been in serious trouble, politically speaking. After losses suffered in the recent parliamentary elections, she is clinging to power and is increasingly unpopular even within her own Conservative Party. So what do you do when you are in trouble at home? You create a foreign crisis that you have to deal with. 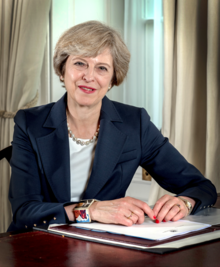 May: Little to smile about now.

If you are someone as venal as former American President and bottom feeder Bill Clinton you accomplish that end by firing off a few cruise missiles at a pharmaceutical plant in Sudan and at some mud huts in Afghanistan. If you are May, you up the ante considerably, coming up with a powerful enemy who is threatening you, enabling you to appear both resolute and strong in confronting a formidable foe. That is precisely what we have been seeing over the past month relating to the alleged poisoning of former Russian double-agent Sergei Skripal and his daughter Yulia.

There is quite a bit that is odd about the Skripal case. Even the increasingly neoconnish Guardian newspaper has conceded that “the British case [against Russia] has so far relied more heavily in public on circumstantial evidence and secret intelligence.” And secret intelligence, so called, has all too often been the last refuge of a scoundrel whenever a government is selling snake oil to the public. In this case, Foreign Secretary Boris Johnson rushed to judgement on Russia less than forty-eight hours after the Skripals were found unconscious on a bench in Salisbury, England, too soon for any chemical analysis of the alleged poisoning to have taken place.

May addressed Parliament shortly thereafter to blame the Kremlin and demand a Russian official response to the event in 36 hours, even though she had to prevaricate significantly, saying that the apparent poisoning was “very likely” caused by a made-in-Russia nerve agent referred to by its generic name Novichok. She nevertheless rallied the backbenchers in Parliament, who responded with a lot of hearty “Hear! Hear!” endorsements.

When Labour Leader Jeremy Corbyn attempted to slow the express train down by suggesting that it might be wise to wait and see what the police investigation uncovered, he was hooted down. The British media was soon on board with a vengeance, spreading the government line that such a highly sensitive operation would require the approval of President Vladimir Putin himself. The expulsion of Russian diplomats soon followed.

One of the strangest aspects of the Skripal case is that daughter Yulia was released from hospital on Tuesday. She has been held incommunicado and is being “protected” in a secret location by the British government. It is

Corbyn: Trying to apply the brakes to a runaway train.

impossible to know if she wants to return to her life in Russia and is being held against her will, not so much to protect her as to silence her.

Sergei is no longer in critical condition. A cousin Viktoria Skripal has offered to fly in from Moscow to provide support for her family, but was denied a British visa. Russian television aired a recording of a phone call between the two cousins in which Yulia said that she was disoriented but improving and that neither she nor her father had suffered permanent damage from the poisoning. The call ended abruptly and Viktoria Skripal believes that it was scripted by the British government on a controlled phone line.

Repeated requests by Russia to obtain a sample of the alleged nerve agent for testing have been rejected by the British government in spite of the fact that a military grade nerve agent would have surely killed both the Skripals as well as anyone else within 100 yards. As the latest British account of the location of the alleged poison places it on the door handle of the Skripals’ residence, the timetable element is also unconvincing. That means that the two would have spent three hours, including a stop at a pub and lunch, before succumbing on a park bench. Military grade nerve agents kill instantly and this one is said to be 8 times more powerful than VX.

A request to have the testing done by the politically neutral Organization for the Prohibition of Chemical Weapons is in progress, but there is little enthusiasm from the British side, which does not want a Russian observer to participate in the process. The May government has already established its own narrative and certainly would have plenty to lose if the whole affair turns out to be fabricated. And fabricated it might have been as the nerve agent, if it actually exists, could have been manufactured almost anywhere.

The head of Britain’s own chemical weapons facility Porton Down has contradicted claims made by May, Johnson, and British Ambassador in Moscow Laurie Bristow. The lab’s chief executive, Gary Aitkenhead, has testified that he does not know if the nerve agent was actually produced in Russia, a not surprising observation as the chemical formula was revealed to the public in a scientific paper in 1992 and there are an estimated twenty countries capable of producing it. There are also possible stocks of Novichok remaining in independent countries that once were part of the Soviet Union, to include Russia’s enemy du jour Ukraine, while a false flag operation by the British themselves, the CIA or Mossad, is not unthinkable.

The resort to official Orwellian govspeak by the British is remarkable throughout the process, but is particularly painful reading regarding the treatment of the Skripals’ pets, two guinea pigs and a cat. A spokesman for the Department of the Environment reported that “The property in Wiltshire was sealed as part of the police investigation. When a vet was able to access the property, two guinea pigs had sadly died. A cat was also found in a distressed state and a decision was taken by a veterinary surgeon to euthanize the animal to alleviate its suffering. This decision was taken in the best interests of the animal and its welfare.”

So the presence of squadrons of technicians and cops in the residence did not permit anyone to take a minute to feed the cat and guinea pigs. And the cat was killed as a purely humanitarian gesture – it’s “best interest” was apparently to die. Sounds familiar, doesn’t it?

Finally, the best argument against the British government’s evasions about what took place in Salisbury on March 4 remains the question of motive.

The British would have one believe that Putin personally ordered the killing of a former British double agent who had been released from a Kremlin prison in a spy swap and who was no longer capable of doing any damage to Russia. He did that in spite of the fact that he had an election coming up and would be the host of the World Cup in the summer, an event that he would want to go smoothly. So he deliberately shot himself in the foot on both counts, allegedly because he wanted to send a message to traitors and also because he just can’t help himself since he is a vindictive KGB type whose impulses are pure evil. Does that make sense to the reader? It doesn’t to me.

An earlier version of this article was published on the Unz Review.

Philip Giraldi, a former CIA officer, is executive director of the Council for the National Interest.

60 comments for “Liars Lying About Nearly Everything”