Raising a white flag is an internationally recognized sign of truce and request for negotiation, which may be what the U.S. is doing in its official response to Putin’s announcements on nuclear parity with the United States, Gilbert Doctorow explains.

Vladimir Putin’s presentation of Russia’s new weapons systems during his address to the Federal Assembly on March 1 seems to have finally elicited the desired response from its target audience in Washington, D.C. In that presentation, Putin spoke about strategic weapons systems employing cutting-edge technology that, he claimed, is more than a decade ahead of U.S. and other competition. 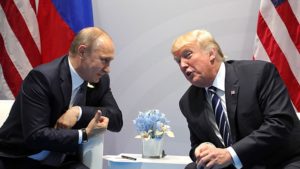 He scored a direct hit in the Pentagon, where senior generals were left dumbfounded. But, as is normally the case, when these gentlemen need time to collect their wits, we heard first only denial: that the Russians were bluffing, that they really have nothing ready, that these are only projects, and that the U.S. already has all of the same, but is holding it back in reserve.

Of course, not everyone among the U.S. political elite bought into this stop-gap response.

On March 8, Senators Dianne Feinstein (D-Calif.), Edward J. Markey (D-Mass.), Jeff Merkley (D-Ore.), and Bernie Sanders (I-Vermont) wrote an open letter to then Secretary of State Rex Tillerson urging him to send a delegation to open arms control talks with the Russians “as soon as possible.”

This was an improbable demarche that even their supporters in the progressive camp, let alone mainstream Democrats, found hard to believe. Feinstein and Sanders have been vocal critics of Russia and were actively promoting the Trump-Russia collusion fairy tale in recent months. They were among those who had hissed at the pictures of Jeff Sessions, not yet Attorney General, shaking hands and smiling with Russian Ambassador Kislyak.  Now they were calling for revival of arms control talks with… the Russians.

This was a story that died before publication everywhere except in Russia, where it had been a featured news item within hours of the letter’s release. The American and world public knew nothing about it, although the letter was there for the reading on the home pages of the Senate websites of the respective co-authors. The American and world public know nothing about that letter today, nearly two weeks after its release, apart from readers of Consortium who were properly informed at the time.

In the meantime, the U.S. propaganda machine moved into high gear, producing diversionary issues to draw the attention of the U.S. public away from what had been the subject of Putin’s speech of March 1.

And so we have been getting saturation news coverage of the “Skripal nerve gas attack,” of the alleged cyber attack on the US energy grid and water systems. Both are pure “Russians did it” stories. And we read about the repositioning of U.S. naval forces in the Mediterranean to within cruise-missile range of Damascus for a possible punitive blow in response to a chemical attack on civilians by Assad’s regime that still has not happened, all with intent to humiliate Assad’s backers, the Russians.

Now, at last, after the denial and the diversion, the truth begins to emerge. The President of the United States himself is the bearer of a message that, given American hubris, amounts to the raising of a white flag.

We find the following on page one of the New York Times describing Trump’s remarks about his phone call to congratulate Vladimir Putin on his electoral victory: “We had a very good call,” the Times quotes Trump as saying. “We will probably be meeting in the not-too distant future to discuss the arms race, which is getting out of control.”

The Financial Times has this to say on page one: “Donald Trump said he wanted to meet Russian president Vladimir Putin to discuss an arms race that was ‘getting out of control’ and other issues over which the countries remain at loggersheads. ‘Being in an arms race is not a great thing,’ the US president said on Tuesday, adding that he would probably meet his Russian counterpart in the ‘not too distant future’.”

In other words, the re-instatement of Russian strategic parity with the United States appears to be making itself felt (see Ray McGovern article). But of course, one has to be an expert in reading between the lines to parse from Trump’s statement the depth of concern about new Russian military potential.

It is a safe assumption that now arms talks with the Russians will begin soon. But the American public should be forewarned that the scope of the discussions will surely be much greater than that of the so-called reset under Barack Obama, which played to an American, not a Russian wish list of cutting warheads. This broader agenda will have to take in Russian concerns about the U.S. global anti-missile system. Should there be agreement, the change in approach to arms control will not from U.S. charity, but out of U.S. fear.

Did Donald Trump raise the white flag and call for negotiations on a whim?  Did he consult with his military advisers?

It is scarcely credible that this president came to the conclusion about the need to halt the arms race on his own or that he dared raise such an inflammatory subject without having the firm backing of Pentagon specialists who evaluated rationally and expertly where we now stand in in strategic security with the Russians. No one will say this, but it is inescapable.

To put the present situation in an historical context: in the past year or two, the United States and Russia have reached a level of confrontation that approaches that of the Cuban Missile Crisis. That crisis was resolved by mutual retreats on positioning of nuclear capable missiles near the borders of the other side. The mutuality of the solution was not announced to the American public until decades later, when the withdrawal of U.S. missiles from Turkey was made public.

This time, the mutuality of major concessions will necessarily be part of the presentation of any solution reached to the global community. Vladimir Putin will not go the way of Nikita Khrushchev, who paid for his “concession” to the Americans by a palace coup at home.

Gilbert Doctorow is an independent political analyst based in Brussels. His latest book, Does the United States Have a Future? was published in October 2017. Both paperback and e-book versions are available for purchase on www.amazon.com and all affiliated Amazon websites worldwide.

85 comments for “Calling for Arms Talks with Russia, is the U.S. Raising a White Flag?”