Highlighting the U.S.’s long history in meddling in other countries’ elections is not “whataboutism,” but rather a highly germane point to understanding the context for the allegations of Russian meddling in Election 2016, Caitlin Johnstone observes.

There is still no clear proof that the Russian government interfered with the 2016 U.S. election in any meaningful way. Which is weird, because Russia and every other country on earth would be perfectly justified in doing so. 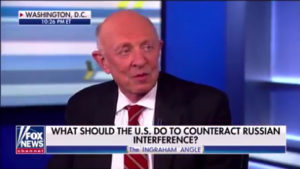 Like every single hotly publicized Russiagate “bombshell” that has broken since this nonsense began, Mueller’s indictment of 13 Russian social media trolls was paraded around as proof of something hugely significant (an “act of war” in this case), but on closer examination turns out to be empty.

The always excellent Moon of Alabama recently made a solid argument that has also been advanced by Russiagate skeptics like TYT’s Michael Tracey and Max Blumenthal of The Real News, pointing out that there is in fact no evidence that the troll farming operation was an attempt to manipulate the U.S. election, nor indeed that it had any ties to the Russian government at all, nor indeed that it was anything other than a crafty Russian civilian’s money making scheme.

The notion that a few Russian trolls committed a “conspiracy to defraud the United States” by “sowing discord” with a bunch of wildly contradictory posts endorsing all sorts of different ideologies sounds completely ridiculous in a country whose mainstream media spends all its time actively creating political division anyway, but when you look at it as a civilian operation to attract social media followers to sock puppet accounts with the goal of selling promoted posts for profit, it makes perfect sense.

James Corbett of The Corbett Report has a great video about how absolutely bizarre it is that public dialogue is ignoring the fact that these trolls overwhelmingly used mainstream media like the Washington Post in their shares instead of outlets like RT and Infowars. As a scheme to acquire followers, it makes perfect sense. As a scheme to subvert America, it’s nonsensical.

There is currently no evidence that the Russian government interfered in the U.S. election. But it is worth pointing out that if they did they had every right to. 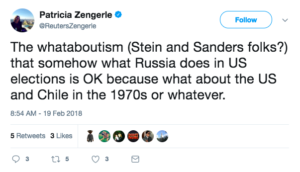 “Whataboutism” is the word of the day. At some point it was decreed by the internet forum gods that adding “-ism” to a description of something that someone is doing makes for a devastating argument in and of itself, and people have hastened to use this tactic as a bludgeon to silence anyone who points out the extremely obvious and significant fact that America interferes in elections more than any other government on earth.

“Okay, so America isn’t perfect and we’ve meddled a few times,” the argument goes. “So what? You’re saying just because we’ve done it that makes it okay for Russia to do it?”

Actually, yes. Of course it does. Clearly. That isn’t a “whataboutism,” it’s an observation that is completely devastating to the mainstream Russia narrative. If it’s okay for the CIA to continuously interfere in the elections of other countries up to and including modern times, it is okay for other countries to interfere in theirs. Only in the most warped American supremacist reality tunnel is that not abundantly obvious.

Every country on earth is absolutely entitled to interfere in America’s elections. America is responsible for the overwhelming majority of election interferences around the world in modern times, including an interference in Russia’s elections in the nineties that was so brazen they made a Hollywood movie about it, so clearly an environment has been created wherein the United States has declared that this acceptable.

It amazes me that more people aren’t willing to call this like it is. No, it would not be wrong for Russia to interfere in America’s elections. Yes, what America did to Russia absolutely would make a proportionate retaliation okay. Of course it would. 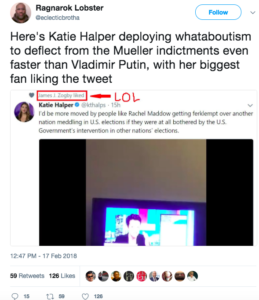 A guy in a cowboy hat runs into a bar and starts punching people. Most of them just rub their sore jaws and hunch over their drinks hoping to avoid any trouble, but one guy in a fur cap sets down his vodka and shoves the man in the cowboy hat.

The man in the cowboy hat begins shrieking like a little girl. All his friends rush to his side to comfort him and begin angrily shaking their fists at the man in the fur cap.

“Hey, he punched me!” says the man in the fur cap.

“That’s a whataboutism!” sobs the man in the cowboy hat.

Can you imagine anything more ridiculous?

Seriously, how do people think this is a thing? How does anyone think it’s legitimate to respond to my article about a former CIA Director openly admitting that the U.S. still to this day interferes with elections around the world babbling about “whataboutisms”? What a doofy, indefensible monkey wrench to throw into the gears of political discourse.

Yes, obviously by asserting that it is acceptable for the CIA to meddle in other countries’ elections, the US has created an environment where that sort of thing is acceptable. If Americans just want to embrace their American supremacist bigotry and say “Yeah we can do that to you but you can’t do it to us cuz we have big guns and we said so,” that’s at least a logically consistent position. Crying like little bitches and behaving as though they’ve been victimized by some egregious immorality is not. 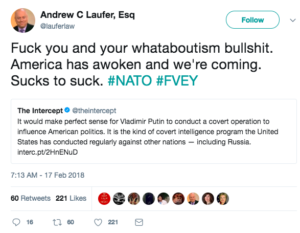 Channel 4 News reported on the research of the Institute for Politics and Strategy at Carnegie Mellon University’s Don Levin back in November, writing the following:

“Dov Levin, an academic from the Institute for Politics and Strategy at Carnegie Mellon University, has calculated the vast scale of election interventions by both the US and Russia.

“According to his research, there were 117 “partisan electoral interventions” between 1946 and 2000. That’s around one of every nine competitive elections held since Second World War.
The majority of these – almost 70 percent – were cases of U.S. interference.

If Americans don’t like election meddling, they need to demand that their government stops doing it. As long as it remains the very worst offender in that department, the U.S. is entitled to nothing other than the entire world meddling in its elections.

I shouldn’t even have to say this. Do unto others as you would have them do unto you. Don’t dish it out if you can’t take it.