The renewed popularity of George W. Bush among Democrats may reflect a growing tolerance of war among American voters, notes Caitlin Johnstone.

Will Ferrell returned to his familiar role last weekend as George W. Bush on Saturday Night Live, doing a bit on the recent news that the 43rd US president is now enjoying soaring popularity among Democrats. 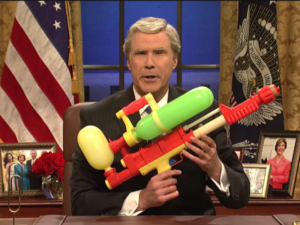 It was a funny bit, I guess. Ferrell reminded the SNL audience how “historically not good” Dubya was, joked about thrown shoes and how Dick Cheney’s heart is made of Legos now, and of course snuck in the obligatory comment about Russia rigging America’s elections as though that’s a real thing.

The majority of the skit was built around a refrain you’re hearing more and more from Democratic pundits who haven’t quite lost their minds yet, reminding viewers that as bad as Trump is, he still hasn’t done anything remotely as bad as Bush’s full-scale ground invasions of nations where US troops are still involved.

Anyone with even a drop of self-awareness knows that the cuddly wuddly new image Dubya is enjoying in mainstream America is taking Trump hysteria a bridge too far. Even MSNBC stooge Chris Hayes said not long ago that “The Iraq War was worse than anything Donald Trump has done (so far).”

Yeah, they like to say that. What they never, ever like to do is acknowledge the far more uncomfortable fact that as bad as Trump is, he also still hasn’t done anything as bad as what the Obama administration did to Libya.

So I don’t think it’s accurate to suggest, as Ferrell’s Dubya character does, that Bush’s newfound popularity among Democrats is due solely to comparisons between the current Republican president and the last one. It’s impossible to hold Bush as the horribly evil butcher that he unquestionably was while cheering on his successor for eight years who only continued and expanded those same bloodthirsty agendas. In order to support Obama, you necessarily had to compartmentalize away from the horrors of the Bush administration.

But I think there’s an even more important factor at play here, and it’s this: Democrats spent 2016 gaslighting themselves into believing that a warmongering neocon who supported the Iraq invasion would make a fantastic president.

Time and time again in the lead-up to the 2016 primary and general elections I debated Hillary Clinton supporters from the perspective that her support for the Iraq invasion utterly disqualified her for the role of Commander-in-Chief of the most powerful military force in the history of civilization. And they argued right back, often on the grounds that the Iraq invasion wasn’t as bad as I was making it out to be.

Conversations and debates like this would have been happening all across the country that entire year, and Clinton supporters on that side of the debate would have to have found a way to contort their sense of reality into making Bush’s barbarism seem understandable and acceptable. They had to psych themselves into supporting their candidate. 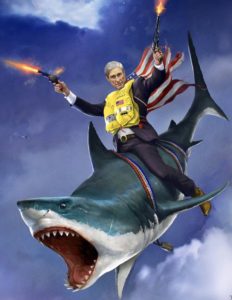 And this is why members of the so-called “Resistance” would rather spend time drawing pictures of Robert Mueller riding on a shark than on trying to curb Trump’s Orwellian surveillance powers and unconstitutional war powers: those are Bush’s policies, and Democrats have been forced to gaslight themselves into falling in love with Bush.

Democrats are Bush now. Everything they once opposed they have now been manipulated into supporting, and the smiling, blood-soaked face of establishment politics is allowed to lull us all deeper and deeper into insanity.