In appreciation for the flood of condolences and tributes to Consortiumnews.com founder Robert Parry, we publish a sampling here.

Robert Parry’s family has been deeply touched by the flood of messages mourning his loss. As a father, grandfather, uncle, cousin, brother, husband, and yes, as a journalist, Bob touched so many lives and we will be processing and coming to terms with his loss for a long time to come. 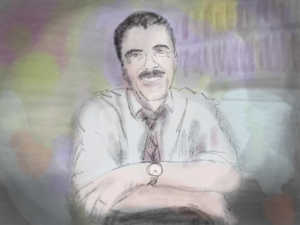 A drawing of Robert Parry by Caitlin Johnstone posted at Medium.com

In appreciation for the outpouring of support we have received, we’re collecting here some of the many articles, radio segments and YouTube videos that have appeared in recent days. To read the hundreds of reader comments left following his passing, please visit my article, “Robert Parry’s Legacy and the Future of Consortiumnews.”

My apologies to those who have penned tributes that haven’t made it into this compilation.

Filmmaker – and friend of Bob’s – Oliver Stone wrote on Facebook Tuesday: “Robert Parry’s death Saturday night leaves a giant hole in American journalism. To my mind, he exists now alongside I.F. Stone, Drew Pearson, George Seldes, Gary Webb, and others as seekers of truth at the steep price you seem to have to pay to follow your common sense and your integrity when they are in direct opposition to the tyranny of mainstream media conformity.”

Intercept journalist Jon Schwarz has been a supporter and promoter of Bob’s work for many years. His blog A Tiny Revolution often included recommendations of Bob’s books and included links to Consortiumnews.

In a tweet following his death, Schwarz wrote, “Robert Parry was one of the best and most independent-minded American reporters of the past 50 years. Not surprisingly, this meant he got 2% of the recognition of DC’s endless supply of hacks, and was forced to start his own publication.”

In a touching tribute at Medium, journalist Caitlin Johnstone wrote,

“I would suggest that it is [an] underlying devotion to the plight of mankind which allowed Robert Parry to become Robert Parry. It wasn’t his connections, his political opinions, his ideas, or even his raw talent; it was the fact that he cared so much. The fact that he couldn’t dissociate himself from the horrors of this world, the evil things humans are doing to one another and the omnicidal trajectory we appear to be headed along. He saw it all, he felt it all, and he let it move him.”

“Robert Parry’s death is a profound loss to our country as a political and intellectual community,” wrote Jim Kavanagh today at Counterpunch. “It’s a shame that most Americans don’t know that – and, indeed, don’t even know who Robert Parry is. That ignorance is a sign of how impoverished our political and intellectual community has already become.”

At Alternet, former New Republic editor Jefferson Morley reflected on his impressions of Bob when they got to know each other in the mid-1980s.

“Parry was rare among reporters of [the Reagan] era in that he did not take his cues from the White House or defer to Reagan’s popularity,” Morley wrote. “While others tried to spin U.S. support for death squads as a defense of democracy, Parry penetrated the veil of official secrecy.”

YouTube vlogger Ryan Dawson posted a video Monday in which he described the influence that Bob’s work has had on his understanding of the world. “Robert Parry was a go-to writer for me,” he said. “The man was on top of it, right until his last days.”

Another video at YouTube from the “Fault Lines” program delves into some of the unfair attacks that Bob has experienced in his career, including after his death. One of the hosts, Garland Nixon, reported that the anonymous smear merchants of the shadowy PropOrNot website continued to attack Bob after he passed away. “These people are slime,” Nixon correctly pointed out.

The Peter B. Collins radio show devoted half an hour to remembering Robert Parry’s work, discussing Bob’s passing with his friend Ray McGovern. “He was a really good example to me of someone who doggedly pursued the truth and suffered the marginalization. They made him a pariah. They called him a Putin puppet,” McGovern said.

I appeared on Dennis Bernstein’s “Flashpoints” radio program Monday along with journalist John Pilger, which you can listen to here. Pilger expressed appreciation for Bob’s steadfast commitment to evidence-based journalism and pushing back against assertions and fact-free claims promoted by the mainstream media, whether related to Russiagate or the Syrian civil war. “What Bob Parry did most effectively was to produce the evidence,” Pilger said.

A tribute by Jim Naureckas at Fair.org, the website of Fairness in Accuracy and Reporting – an invaluable outfit with which Bob had a longstanding relationship – noted Monday that “journalism lost one of its most valuable investigators when Robert Parry died from pancreatic cancer on January 27, at the age of 68.”

“He was a pioneer in bringing maverick journalism to the Internet,” FAIR founder Jeff Cohen wrote after Bob’s death. “Bob was a refugee from mainstream media who, like Izzy Stone, went on to build an uncensored and uncensorable outlet.”

The Young Turks correspondent Michael Tracey tweeted: “The death of Robert Parry leaves such a void for those who see the main function of journalism as challenging horde logic. Many posture as being committed to such, but parrot propaganda when it’s politically convenient. Hence, he won’t get the mainstream recognition he deserves.” 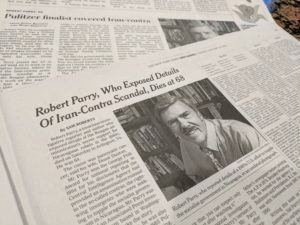 Michael Tracey, it turns out, was only partly right, as some mainstream outlets, including the Washington Post and New York Times – papers that Bob had often criticized for promoting propaganda and “groupthink” – published grudgingly respectful obituaries.

“In 1995, frustrated with what he saw as dwindling venues for serious investigative reporting, Mr. Parry founded the Consortium for Independent Journalism,” wrote the Post.

However, the Post couldn’t resist getting in a jab implying that Bob’s brand of journalism isn’t financially viable: “Its website, Consortiumnews.com, sought to provide a home for such reporting in the early days of the Internet, although it struggled financially and relied on contributions.”

The NYT noted that Bob was considered something of a pariah by “the major established news organizations, which he viewed as constituting a kind of parallel ‘permanent government.’”

(The Times obit was tweeted out by Wikileaks founder Julian Assange, who observed: “Obituaries are one of the few remaining journalistic spaces sanctified enough tell inconvenient truths without fancy footwork.”)

One of the most unique tributes – and one which Bob would have been tickled by, I’m sure – was pulled together by the website Muckrock, which works to promote transparency in government. Muckrock compiled the CIA’s files relating to Bob Parry’s journalism, noting that “the Central Intelligence Agency archives contain over 100 of his articles, primarily focused on his Associated Press work from the mid-to-late ’80s.” 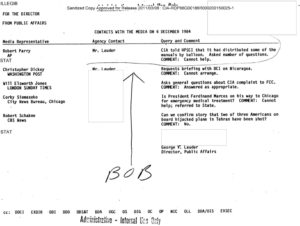 “While the sheer volume of material speaks to the impact Parry’s reporting was having on the Agency internally,” wrote Muckrock’s J. Pat Brown, “perhaps the single greatest indicator of how the CIA felt about Parry is summed up by this handwritten note from the Agency’s Director of Public Affairs.”

The note, from 1984, circled a passage regarding the CIA’s assassination manual that it had been distributing to Nicaraguan contras, and included one word denoting the source of this story: “Bob”

“If there’s any one takeaway to be gleaned from Parry’s legacy,” Brown wrote, “it is that we should all strive to have the CIA know us on a terrified first-name basis.”